All the SUVs launched in 2019 received a warm welcome initially, but things changed for some as the year progressed 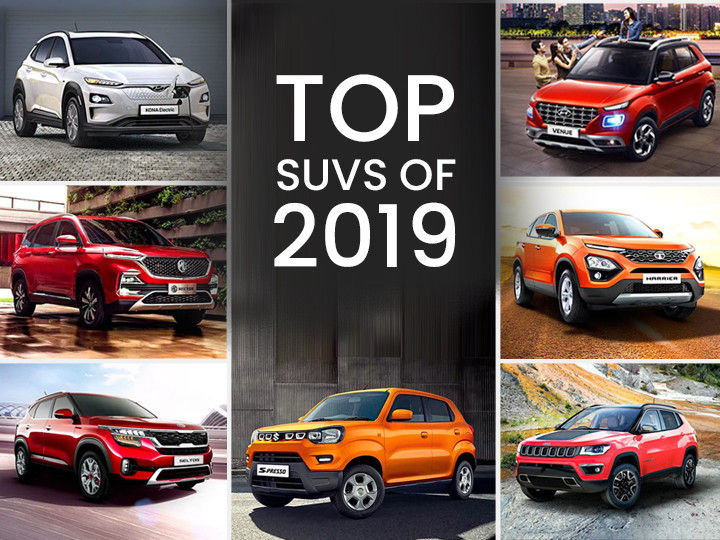 2019… a year full of ups and downs in the Indian automotive industry but there is no doubt it has been dominated by sport utility vehicles (SUVs). Right from the Maruti Suzuki S-Presso and the green Hyundai Kona Electric to the super successful MG Hector and Kia Seltos, all the SUVs launched in 2019 received a warm welcome. Some of them fizzled out over time. As the year comes to a close, we decided to dedicate a list to the SUVs that struck a chord as well as those that didn't.

It’s rare for an unknown brand and product to reap success in a tough market like India.

Enter the Kia Seltos -- not only has it been super successful but it has also taken the Korean manufacturer straight to the fourth position! The car has attracted buyers with its premium no-nonsense styling, upmarket interior, and a never-ending list of first-in-class features. It comes with two trim levels, three powertrain options, four transmission and eight variant options. Moreover, it has been a BS6-compliant model from day one. All of this at an attractive price of Rs 9.69 lakh to Rs 15.99 lakh (ex-showroom) has made it a winner!

The Hyundai Venue might have come late to the compact SUV party but it has made a huge impact -- racking up 75,000 bookings until October 2019! Yes, it does look a bit tame when parked next to a Ford Ecosport or a Tata Nexon but it has impressed with its lengthy feature list including BlueLink connected car technology (first in India). Just like the Seltos, the Venue comes with three powertrain options and a more sophisticated DCT (only in T-GDI variants). All of this means the Venue is one expensive SUV, right? Well, that’s where Hyundai got it right. The Venue is priced from Rs 6.50 lakh to Rs 11.11 lakh (ex-showroom), making it fantastic value for money.

The MG Hector was another unknown SUV from an unknown brand that fascinated Indian buyers. It has all the elements we have come to expect from an SUV. It’s big and brawny, comes loaded to the gills with features, has plenty of space for five occupants as well as decent powertrain options. The much talked about i-SMART connected car technology was also an instant draw with the convenience of operating various features through phone or voice commands. All of this was offered with a price tag of Rs 12.48 to Rs 17.28 lakh, which means the Hector was picked over the Mahindra XUV500 and the Tata Harrier due to its value-for-money quotient.

You might wonder why the S-Presso is in this list. Well, Maruti calls it a mini-SUV so why not. All small Maruti cars are an instant success in India and that’s the case even here with the S-Presso. Its quirky looks might take getting used to, but behind the cover is a spacious cabin, a peppy BS6 engine, and a responsive AMT. It’s also a corner craver, attacking all the twisties with poise despite its tall height. And in case of a breakdown, you can count on Maruti’s wide after-sales network to come to your rescue. Prices for the S-Presso start from Rs 3.69 lakh to Rs 4.91 lakh, which is at par with BS4-compliant Kwid 1.0-litre variants.

The Kona Electric was a brave attempt by Hyundai as it came at a time when charging infrastructure was minimal. But the first long-range EV was received well. In fact, the government of India themselves placed an order for the Kona over the Tata Tigor EV. Hyundai offers the India-spec Kona with a 39.2kWh battery pack that’s capable of taking you 452km (ARAI claimed). The powertrain develops 136PS of power and 395Nm of torque and is capable of doing 0-100kmph in a brisk 9.7 seconds. But more than performance, India got its first taste of a long-range EV that requires less charging breaks and that made the Kona EV a success. Currently, the Kona EV starts from Rs 23.72 lakh (ex-showroom India).

The Jeep Compass Trailhawk was a highly anticipated SUV as it debuted the much-awaited diesel-automatic combo in the SUV. It was also the first BS6-compliant Jeep, making it future ready. Besides, the Trailhawk was the more rugged off-road focussed variant. All of this sounds like a recipe for instant success. But unfortunately, the Compass Trailhawk’s super expensive price tag of Rs 26.80 lakh made it an instant dud. It also commanded a steep Rs 3.69 lakh premium over the well-equipped Limited Plus variant. Consequently, despite the high anticipation, the Compass Trailhawk lost its sheen.

The Harrier also known as Tata’s Land Rover racked up plenty of buyers when it was unveiled. Its brute styling, butch size and modern interior design were instant draws. It also came with Fiat’s tried-and-tested 2.0-litre powertrain mated with a 6-speed manual. But the Harrier proved to be half baked. The lack of a diesel-automatic and petrol powertrain from day one was a major omission. And thanks to its massive size, driving the Harrier in town is a tedious task. Then there’s the fact that the MG Hector and Kia Seltos offered more bang for the buck, which proved to be a serious setback for the Harrier.

That said, we can’t wait to see what next year brings. Are you waiting for anything in particular or are you counting on your favourites from the list? Let us know in the comment section below.

Kia Beats The Curve With Record Seltos Sales In...