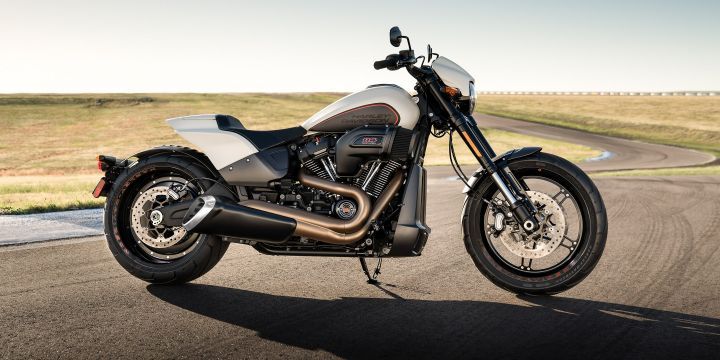 In a bid to stave off the ever-growing, more modern competition, Harley-Davidson recently announced big plans for the next couple of years. As a part of its product onslaught, the American two-wheeler manufacturer unveiled the 2019 FXDR 114 last month. Touted to be one of the most agile and performance-oriented Harley, it’s sole aim seems to be to grab a substantial chunk of the power cruiser market share, which is currently dominated by Ducati. The XDiavel seems to be the FXDR 114’s perfect rival and here’s how they perform against each other on paper:

Though the FXDR 114 looks like a traditional cruiser from afar, what with its the raked out front forks and fat rear tyre, the motorcycle features a much more muscular and minimalistic bodywork. The lighting system is all LED and the wide handlebars nicely complement the stretched 16.6-litre fuel tank. The tank swoops down to the single seat, which has additional bolstering to hold the lower back while accelerating hard. Even the air intake design draws inspiration from the company’s Screamin’ Eagle drag bikes. Harley has made sure the motorcycle gets ample cornering clearance with a stubby, triangular exhaust end can. The rear is dominated by the fat 240-section tyre and a cleverly designed tyre-hugging fender which holds the indicators and the licence plate.

The Ducati XDiavel is a leaner, meaner version of the Ducati Diavel - a motorcycle that kick-started the idea of a cruiser that loves corners. Its design highlights include the exposed trellis frame flanked by the large fuel tank at the top and the modern L-twin motor below. The alloy wheel design feels straight out of a science fiction movie and looks even better thanks to the single-sided swingarm. Although it gets a well-shaped rider’s seat, the pillion seat is too small for anyone to sit comfortably. It is best suited for very short trips. The slash-cut underbelly exhaust keeps the visual mass at the centre, while the 240-section tyre keeps the rear busy.

Harley’s bigger engine towers over the Ducati L-twin in terms of brute torque. This motor is old-school and devoid of electronics. The Ducati’s motor, on the other hand, has a lot of power on offer and is exploited to the maximum by a host of electronic riding aids. It also makes the motorcycle a lot more liveable and safer than the relatively less advanced V-twin in the Harley. It also gets Ducati Power Launch, which works in conjunction with the Inertial Measurement Unit and the traction control system to optimally deliver the power for quickest and safe acceleration. The American manufacturer, on the other hand, offers a range of performance-enhancing Screamin’ Eagle parts ranging from Stage 1 to 4, which are backed by factory warranty.

Based on the table above, the XDiavel seems to be the superior one thanks to its relatively sophisticated underpinnings that are versatile enough to fine-tune the dynamics. The motorcycle also offers a 40-degree lean angle whereas the FXDR offers a lean angle of 32.8 degrees. And while Harley’s single-channel ABS is expected to be effective while stopping in a straight line, the cornering ABS in the XDiavel helps in maintaining control even while braking mid-corner. It can even modulate braking by sensing the lean angles and the traction levels.

Compared to motorcycles from its Softail range, Harley has implemented a lot of weight-saving components like aluminium and composite materials (especially at the tail section) in the FXDR to make it as agile as possible. However, it is still 56kg heavier than the XDiavel. It remains to be seen how the added weight affects the motorcycle’s real-world performance. The Italian power cruiser leads in other aspects as well. It gets a slightly larger fuel tank and rides 30mm higher than the FXDR. However, the FXDR’s longer wheelbase should make the motorcycle steady on the straights, especially while riding at high speeds.

Harley-Davidson has priced the 2019 FXDR 114 at $21,349 (INR 15.13 lakh). The XDiavel, on the other hand, is $854 (Rs 60,522) less expensive despite having a much more advanced powerplant, underpinnings and electronics. Considering Ducati’s competitive pricing and features, it seems Harley is asking a tad too much for what’s essentially a faster and more performance-oriented version of its Softail range of cruisers.