A year after the all-new Honda CB1000R made its international debut, the Japanese two-wheeler giant has launched its flagship streetbike in India at Rs 14.46 lakh (ex-showroom Delhi). However, only the CB1000R+ variant is available in India. 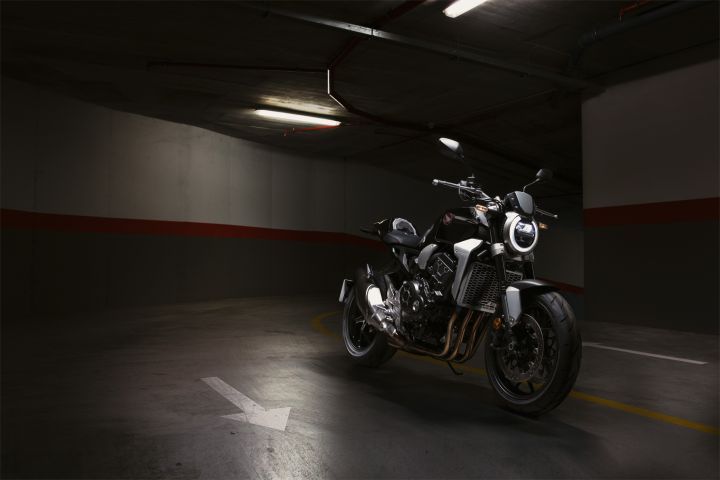 It gets additional features such as a quickshifter, heated grips and cosmetic accessories that consists of a flyscreen, seat cowl, front fender panel, hugger panel and radiator grill. Also, the CB1000R+ is available only in a single shade of ‘Graphite Black’ in India.

The CB1000R+ is basically the naked version of the Honda CBR1000RR Fireblade. One of the major draws for the new motorcycle is its new design language, dubbed as the ‘Neo Sports Café’. Thanks to its neo-retro styling, the new Honda motorcycle looks very distinct from its competitors which have sharper lines. It gets a circular LED headlight housed between chunky USD forks.

The curvy fuel tank flows well with the overall design and the minimalistic tail gives the rear section a floating look. While it might have a café racer influence, the riding posture is upright with flat and wide handlebars, and marginally rear-set footpegs. The instrument cluster is an all-digital unit, however, it isn’t a TFT screen.

Powering the Honda CB1000R+ is a 998cc, inline four-cylinder motor churning out 145.5PS at 10,500rpm and 104Nm at 8,250rpm. The engine is mated to a 6-speed gearbox. The bike features ride-by-wire, four riding modes (Standard, Sport, Rain and User) and traction control system.

Suspension hardware consists of a 43mm Showa SFF-BP (Separate Function Fork-Big Piston) USD fork and a Showa BRFC (Balance Free Rear Cushion) monoshock connected via a single-sided swingarm. Braking duties are handled by 310mm twin disc brakes at the front and a 256mm single disc at the back. The 2018 Honda CB1000R+ weighs 212kg (kerb weight), which makes it almost 8kg lighter than its predecessor.