The Kawasaki W175 now gets new colours for the roadster, scrambler and cafe racer variants 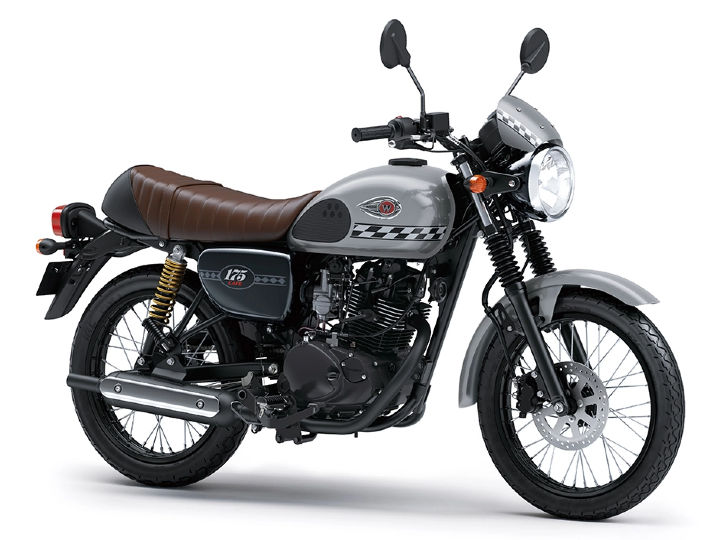 Kawasaki recently launched the 2023 iteration of its smallest retro motorcycle, the W175, in Indonesia. While the overall design language of the updated model remains the same as its predecessor, the W175 is now available in new colors across all the three distinct variants namely TR, TRSE and Cafe Racer. These variants are meant to provide buyers the option of either going for a roadster or scrambler or cafe racer look. Kawasaki will now also offer the TR variant in a traditional green paint scheme.

The TR variant is the scrambler variant, which gets a ribbed seat and a raised front and rear fender, along with a bash plate. There is also a special edition of this roadster called the TRSE, which comes in two special edition paint schemes inspired from the 1950s. The cafe racer version comes with a retro headlamp cowl, coupled with special graphics across the tank and side panels. It also gets a cafe racer style seat. The TR is priced at 33.4 million Rupiah (equivalent to Rs 1.77 lakh), while the TRSE costs 34.4 million Rupiah (Rs 1.82 lakh) and the cafe racer variant is for 35.6 million Rupiah (Rs 1.89 lakh).

The engine continues to remain the same as the outgoing model in the form of an air-cooled, 177cc single cylinder block churning out a meagre 13PS and 13.2Nm. That said, the biggest strength of the Kawasaki is its kerb weight, tipping the scales at only 126kg, thereby still offering a decent power-to-weight ratio.

Underpinnings continue to feature a simple suspension setup consisting of telescopic fork and dual shocks. Even the braking hardware is traditional – a single disc at the front and a drum brake at the rear. The Kawasaki W175 looks like a scaled-down version of the W800 Street. From the halogen headlight and the teardrop-shaped tank to the ribbed seat and wire-spoke rims, the bike screams retro.

In the past, the Kawasaki W175 had been spotted testing in India a couple of times, once in November 2020 and once in August 2021. Given the recent popularity of retro motorcycles in the market, the possibility of the 2023 iteration of the W175 being launched in the Indian market cannot be ruled out.

The W175 might only be a 177cc bike but it could be priced on par with the Royal Enfield Meteor 350, Yezdi Scrambler and the Honda H’ness CB350. The bike would compete with the Yamaha FZ-X once launched in India.