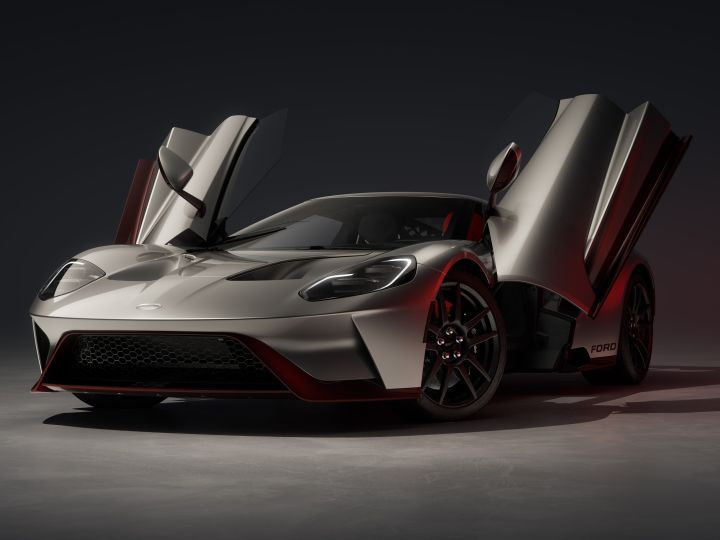 Ford has debuted a new limited edition GT LM Edition to commemorate its victory at the 2016 Le Mans and honour the original GT40’s legacy at the 24 Hours of Le Mans. 2022 is the final year of production for the Ford GT and the LM Edition is the last hurrah of the second-generation supercar.

“As we close this chapter of the road-going Ford GT, the GT LM Edition gave us a chance to inject even more heart and soul from a podium-finishing racecar, furthering the tribute to our 2016 Le Mans win” – Mark Rushbrook, Global Director of Ford Performance Motorsports.

The new Ford GT LM sports a Liquid Silver paint shade and can be had with red or blue-themed exterior accents, similar to the red and blue racing livery of the racer. Aerodynamic components such as the front splitter, rear diffuser, side sills and door sills are carbon-fibre components with a tinted red or blue hue.

Inside, the LM Edition gets carbon-fibre seats with Alcantara upholstery and a matching red or blue-coloured driver's seat. The instrument panel features a special edition badge that’s 3D-printed from the ground-up crankshaft of the 2016 Le Mans-winning race car.

The Ford GT LM Edition honours the legacy of the ‘Number 68’ race car that won the 2016 Le Mans 24 Hours at the hands of Sebastian Bourdais, Joey Hand and Dirk Muller. The Number 69 race car also achieved the podium position finishing third; the fourth and ninth placers were Ford GTs as well.

Apart from the GT LM Edition, Ford has built a total of ten limited edition series of the supercar between 2006 and 2022. Apart from the road-going version, Ford Performance and Multimatic have developed the Ford GT Mk II track-only model that’s limited to just 45 units.

The 2022 #FordGT LM Edition, the final special-edition of the 3rd-gen supercar, celebrates America’s only 24 Hours of #LeMans-winning race car that won in 2016 and the historic 1-2-3 podium sweep in 1966. @FordPerformance #BuiltFordProud pic.twitter.com/cc7umxfhIh

The Ford GT LM itself is ultra-exclusive, with only 20 units up for grabs. The carmaker will wrap up the supercar’s production by the end of this year.