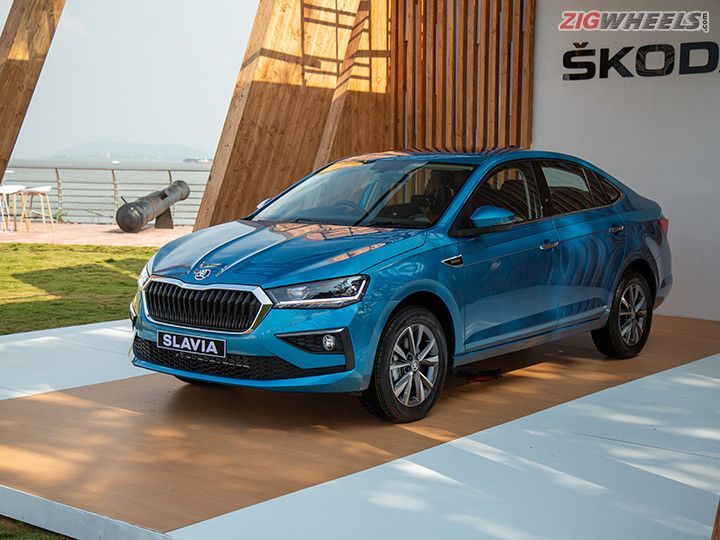 Skoda seemingly warmed us up for the entire car buying experience by giving us the Slavia’s information in periodic installments. First, an outline, then exterior design sketches followed by a camouflaged car drive experience, ending the long tease with a glimpse of the interior.

Well, we don’t need to rummage through renders or ponder over possible similarities with Skoda’s global range of sedans because we finally got to experience the real thing. It’s a car that drives into a segment that’s being driven out the market. Skoda’s clearly optimistic, so how much substance does the Slavia offer to back that up?

F Is For Family

We wouldn’t blame Skoda if they went down Nostalgia Road and designed their new car to evoke memories of the Rapid. After all, the Rapid was Skoda’s mainstay for a decade. That isn’t the case, though. Sure, European cars tend to be very evolutionary with design updates even for new generations but while this does have Euro-car lines like the Rapid, the Slavia will strike you as a brand new car.

FYI: The Slavia’s laden ground clearance is the same as the Kodiaq’s - 140mm! 179mm unladen.

The overall stance is similar to the current-gen Octavia’s i.e. very leaned forward; a trait you will especially appreciate from the side profile thanks to the windowline that swoops up as you move rearward.

The front end is nearly identical to the Fabia hatchback sold overseas and also has those crystalline elements in the LED headlights. And thanks to the tail light design, the rear end is oh-so-Superb.

Fun Fact: From the time the Rapid was launched to its discontinuation this year, Honda has launched three generations of the City.

Interestingly, the Slavia is larger than the original Octavia! A cool factoid and also a reflection of how safety norms, features and packaging demands have made cars so much larger over time. What isn’t Octavia about it, though, is how the boot opens up. Nope, no plus-sized fifth door that many were expecting but that 521-litre boot beats already impressive segment standards. The rear seat also folds down to liberate 1050 litres of boot space!

Any gripes? Well not that these 16-inchers look undersized, but 17-inch wheels on the top-spec variant would look so much sweeter.

Does it still have that reassuring thud when you shut the door? Yes, but like we’ve experienced in the Kushaq, compared to the Rapid there is a little bit of that sense of heft missing. What you won’t miss, though, is the Skoda factor. Much like the exterior, the interior will feel like home for those who’ve experienced Skoda/VW cars in the past.

There’s definitely a leaf taken out of the Octavia’s style book but the strongest similarities are with the current-gen Fabia. Save for the AC console and infotainment screen, everything is damn near identical. This isn’t a criticism, just an observation, because it’s a great place to be in.

FYI - The steering is adjustable for rake and reach.

The blend of dull beige, grey, piano black and bronze looks fantastic and even with so many colours and textures to play with, the balance is spot on. As you’d expect, the use of chrome is noticeable but it’s just the right amount to complement the cabin’s layout and not overpower any design highlight.

We also quite liked the cabin quality for the most part (the roof liner still flexes a bit too much). No soft-touch plastics or leatherette padding like we see in the Honda City, but the trim quality feels premium, the buttons wouldn’t feel out of place even in an Octavia, and even the choice of leather for the steering feels rich.

And of course, Skoda can’t help but be a bit Skoda with some “Simply Clever” touches like rubber mats at the base of the cupholders, reflectors on the door edges, rubber straps in the door pockets, phone slots in the seatback pockets and a recessed dashtop to store car perfume bottles or place idols.

FYI - There are type-C USB chargers at the front and rear but the roof-mounted dash cam charging point has been given a miss.

There are some not-so-clever misses too, unfortunately. Only the driver gets the one-touch up/down function for the power window, there’s no global up/down feature that can be controlled from the key and the key itself, like in the Kushaq, looks the same as what we’ve been seeing with Skoda cars for years now.

An improvement over the Rapid is in cabin space. There’s generous room for four six-footers to fit in with ease and the seats have been contoured to offer great lateral support even at the rear. Rear seat occupants also get AC vents and if you’re looking to be chauffeur-driven, you will enjoy the Slavia’s rear row. That said, the rear seat space still feels more generous in the Honda City and the Jap should also prove to be better at seating three at the rear.

The Slavia shares its powertrain range with the Kushaq, so here too, there is no diesel or CNG option, and the smart money says you shouldn’t hold your breath for either. You get to choose from two turbo-petrols - a 1-litre, 3-cylinder (115PS/178Nm) and a 1.5-litre, 4-cylinder (150PS/250Nm). The latter gets cylinder deactivation as standard, and will be offered with a 6-speed manual transmission or 7-speed DSG automatic. With the smaller engine you get to choose between a 6-speed manual or automatic.

Having experienced both engines with the Kushaq and during the Slavia’s camouflaged car drive, we’d say the smaller motor will serve the needs of most users because it’s a decent all rounder. Performance boost aside, the 1.5-litre engine also offers better refinement and especially with the DSG transmission, more sophistication to the drive as well. By the end of next year there should be nine car models on the road using these two engines (Rapid TSI, Polo TSI, Vento TSI, T-Roc, Karoq, Kushaq, Taigun, Slavia and the yet-to-be-announced VW Virtus), so we’re excited to see how the aftermarket caters to the tuner scene.

Realistically, we don’t see the Slavia doing much damage to SUV counterparts available at the same price point. Those who want the tall driving position, shape and stance of an SUV won’t easily gravitate towards a car like the Slavia, competent as it may be.

The Slavia itself isn’t a car that’s making its presence felt by chasing big headlines with multiple stand-out traits. What it offers is a sweet balance between the alternatives currently available in the segment. It has great drive options, stands out as something European in design, offers an impressive tech package like we’ve seen in cars like the Verna while offering a spacious cabin that comes close to rivals like the Honda City and Maruti Ciaz, if not beat them.

You should be able to check out the Slavia in January 2022, test drive it around February 2022, and expect the prices in March 2022, with deliveries shortly after.