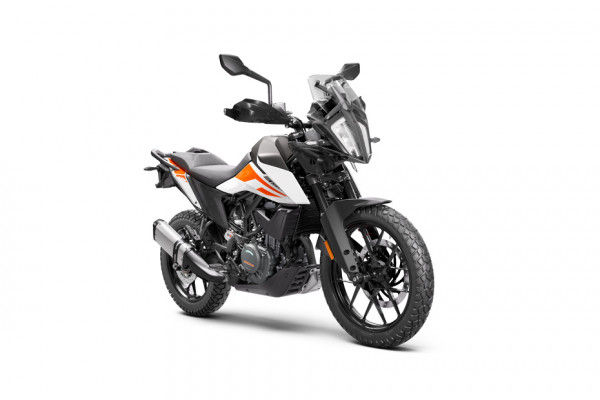 Ask your question from 390 Adventure owners and experts
Your Question should contain at least 5 characters Submit Cancel
Available EMI Options
Rs. 8,498 per month @ 6% Apply for Loan

KTM has increased the prices of its entire India lineup including the 390 Adventure. The 390 Adventure now costs Rs 3,10,365, which is a hike of Rs 4,486. This makes it a lot more expensive than the newly launched BMW G 310 GS BS6. On a slightly different note, you can now unlock the 390 Adventure’s true off-road prowess with the option of a pair of spoked wheels which is offered as part of KTM’s powerpart catalogue. More details here. KTM will soon be offering a number of powerparts for the 390 Adventure, including a GPS bracket, fork protectors, headlight guard, and a handlebar pad. The company is also working on made-in-India luggage systems for the bike.

The motorcycle is one of two small-capacity adventure motorcycles (the other one being the 250 Adventure) from the Austrian manufacturer that offer a small taste of KTM’s rich off-road DNA.

The tubular steel trellis frame is suspended at both ends with long-travel units. The front end gets a 43mm USD fork which isn't adjustable in the India-spec model. The rear cast aluminium swingarm might look similar to the one found on the 390 Duke, but it is longer on this bike. This swingarm gets a rebound and preload-adjustable monoshock unit, boasting of a rear wheel travel of 177mm. While we would have liked to see spoke rims, alloy wheels are a better bet when it comes to practicality and cost. A 19-/17-inch wheel setup seems like the norm on small-capacity adventure tourers like the 390 Adventure. These are kitted out with Metzeler Tourance dual-purpose tyres.

While the 390 Adventure is designed to handle rough terrains, it is powered by the same 373cc, liquid-cooled, single-cylinder motor that produces 43.5PS and 37Nm of torque on the Naked 390 Duke. The engine works in conjunction with a 6-speed transmission with slipper clutch and a standard quickshifter for the India-spec model. The 390 Adventure features WP suspension up front but with longer travel than the road going sibling. The rear monoshock also gets longer travel and is preload and rebound adjustable.

On the design front, the 390 Adventure to be inspired by the KTM 790 Adventure, which is very close to the company’s Dakar range of bikes. It gets KTM's traditional vertical split LED headlights, on top which is a minimalistic wind deflector. The instrument cluster is similar to the one on the 390 Duke. The bike gets a split seat setup. To tackle river crossings better, it also gets an upswept exhaust.

Royal Enfield Himalayan : The Himalayan is a great bike and a thoughtful one, compared to other Royal Enfield offerings. It has been made in a fashion that ensures it won’t just be great for long trips but even for daily commutes. However, quality issues on the Himalayan work against its favour and we hope Royal Enfield have addressed these problems in this update.

BMW G 310 GS: The G 310 GS is made for riding with ease over both the tarmac and uneven terrain, thanks to its long-travel suspension, dual-purpose tyres and adventure-friendly design. This makes it an ideal companion to explore the countryside. Bear in mind though, that it's not a hardcore off-roader. Both the 310 GS and the 310 R share the 313cc, single-cylinder with 34PS produced at 9500rpm, and 28Nm at 7500rpm.

Q. Which one is best bike for me? Royal Enfield Himalayan or KTM 390 adventure or BMW G 310GS in service cost and spares and riding experience.
Q. What is the seat height of KTM 390 Adventure?
Q. Where is KTM 390 Adventure available for test ride?
Q. Is lowering kit available for KTM 390 Adventure in India?
Q. Is ktm 390 adventure a manageable bike for a beginner or should consider a downgrade to 250
Q. I recently bought the KTM 390 Adventure. How to find out if it is BS6-compliant or not?
View More Questions
Q. Which is better in off road RE Himalayan Or KTM Adventure 390?
Q. I want to ask which is the best bike for daily 60km ride daily? Confused between a Thunderbird and Avenger 220. The issue is I found a lot of vibrations in Tthunderbird any other suggestion is welcome. View All Answers
Q. Himalayan or 390 Adv for daily commute and weekend getaways? I am not sure of 390 adv as I mostly ride in city and wont do high speeds. main concern on Himalayan is reliability and tube tyres. please advice.
Q. Are there any changes or upgrades expected in 2021 for KTM 390 Adv 2021 edition? View All Answers
Q. I am looking for the best bike for my needs. I want one i can drive in the city. My wife rides with my on my bike and wants something to handle to bad roads and speed breakers better. Also we want to ride on long road trips and bring luggage. Don't know which is best BMW G310GS, Himalayan, or the 390 Adventurer. I like the low seat on the Himalayan that my wife could drive it. However it seems too heavy and not enough power. The BMW looks great but seems the suspension is too soft and brakes are week and the electronic package is pretty lame. I don't want anything more than 200kg bike. View All Answers
Q. Can seat height of KTM 390 Adventure be lowered?
View More Questions
All 390 Adventure Questions and Answers

The mileage of KTM 390 Adventure is 33.22 kmpl. This is the claimed ARAI mileage for all the variants of 390 Adventure.
View User Reported Mileage

What is the price of KTM 390 Adventure?

What is the mileage of KTM 390 Adventure?

Does the KTM 390 Adventure have ABS?

Which is better KTM 390 Adventure or Royal Enfield Himalayan?

What is the EMI of KTM 390 Adventure in Delhi?

What are the colours available in KTM 390 Adventure?