We thought swinging a leg over Ducati’s latest entry-level streetbike would be a good way to reacquaint ourselves with the basics of riding at the DRE for rookies, so we did just that! 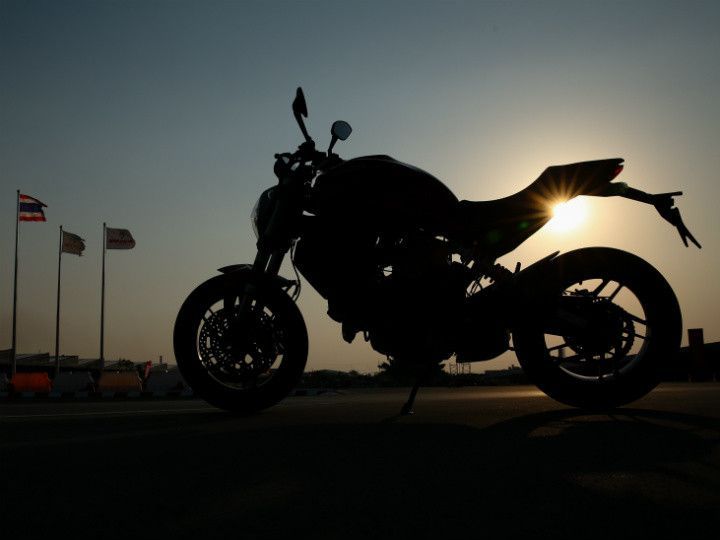 I often ask motorcycling enthusiasts what makes them love motorcycles so much. You are not only exposed to the elements, you are also out of your comfort zone at times. And when you go and ride fire breathing superbikes that cost as much as cars the story gets a little more difficult. Isn't driving a car always more comfortable and easier?

Part of the blame has got to do with the part of the world that I live in. Roads in New Delhi are nothing short of a battleground, and you deserve to be anointed as a battle-hardened warrior, should you get away unscathed. These practical considerations have kept the spark for motorcycles in me from fanning a flame. So when I was asked to attend the Ducati Riding Experience (DRE) Intro course on the latest Ducati Monster 797, I couldn't just say no. But the big question was – will just one day at the DRE be enough to uncork the biker in me? Also, will Ducati's latest entry-level motorcycle tempt or scare newbie riders?

Ducati calls the DRE an experience, but for rookies it is an education. I was a part of the Intro course – for beginners – which starts with classroom training and ends with riding a motorcycle, the Monster 797 in this case, on a closed circuit. Ducati tells us that even those who've never balanced any two wheels in their life will be able to ride the newest Monster by the end of the day! I consider myself a steady if not a seasoned rider and I could see that there were others who were far less experienced than me. Sorry to pick on the stereotype, but petite women with little more than the ability to ride a cycle were part of our group too. I was keen on following their progress session-by-session.

It started with an informal introduction to motorcycles as a part of the theory. Nothing in it was casual though, other than the light-hearted way in which the very basics about motorcycle riding were delivered. The aim was to ease your nerves before riding a big motorcycle which would be frayed if you don't know how to ride at all! I had a bit of 'big motorcycle experience' behind me so I was eager to get onto the 75PS Monster 797 and see where I stood. Soon we were divided into groups and asked to pad up.

Waiting outside, wrapped in Ducati’s signature red colour with the red trellis frame, the Monster 797 looked sporty. On my way towards the motorcycle, an Italian gentleman asked me how the bike looked. “Pure”, was the first word that came to my mind. Ducatis don't come with any livery or graphics, and we were told that the company's core idea is to keep everything simple. It’s a philosophy that resonates deeply with me.

One thought looming large in the heads of most people that morning was the thought of dropping a 175kg (dry weight) motorcycle. So the first exercise of the DRE was to get us accustomed to the weight of the stationary motorcycle. We were asked to take the 797 off the side stand and find an equilibrium position with minimal effort. To help us understand how to manage the weight better, we were asked to balance the motorcycle while holding the handlebar, mirrors or the seat without getting onto it. To top it off, we had to switch positions too! It can get tricky especially when you're right in front or behind the motorcycle, but once you get a hang of maintaining the equilibrium, it becomes easy. The idea of this exercise was to make ourselves believe that the motorcycle is heavy only when handled incorrectly.

Finally, it was time to get onto the motorcycle. I was eager, so I didn't hesitate to go first. While Ducati is expected to alter the Monster 797's seat height for different markets, they have it set at 805mm as standard. I'm almost five-feet-nine, and I could easily rest both my toes down when seated. So, for someone my height, it's comfortable.

For those who knew how to ride, the first two exercises of traversing a zero-figure and an eight-figure track were relatively straightforward. For every three participants there were two instructors who would ride pillion or even run alongside to inspire confidence. Do not forget, some participants weren't even familiar with the basics of motorcycling.

Luckily, the other two guys with me and I knew how to ride, so it didn't take us much time to complete the two exercises. Both were easy but not without learning. Here in India, we don't require formal training before we get a licence to ride or drive and so we miss out the very basics of riding, like correct feet positioning. I was asked to put the ball (part of the foot on the ground when you tiptoe) of my feet on the footpegs and make it a habit. The idea is to keep the feet high enough to remain clear of the ground to bank the bike in corners.

Meanwhile, the Monster 797's air-cooled, 803cc L-Twin cylinder showed that it had enough low end torque to let you tackle rush hour situations in the first two gears without having to twist the throttle much. The peak torque of 69Nm kicks is produced at 5750rpm but it was the torque at the lower end of the rev range that allowed even first-timers to get to a 'less shaky' start. It made me realise why Ducati calls the Monster 797 a motorcycle that even beginners can (learn to) ride.

As everyone got familiar with the controls and hardware on offer, we were asked to up our pace through the formations. However, there was more to it than just opening the throttle. To get the bike to do what you want it to, you first need to get your body to sit right!  Opening up your shoulders a bit, looking far into the corner helps steer the bike more smoothly is what I grasped immediately. A little geometry was also thrown into the mix; after all, who doesn’t want to brag about extreme lean angles! And it all starts with these basics.

Next up was the slalom course where we had to negotiate cones spaced almost a car's length from each other. This exercise was crucial as it made our understanding and connect with the motorcycle deeper. After a few hotchpotch runs it became clear that dabbing the front brakes made the bike steering heavier and kept us from picking smooth lines. To avoid this I was forced to judge my speed better and be more conscious of my throttle inputs. Finally, looking at the next cone, using the rear brake to scrub speed, steering smoothly, gassing it accurately helped draw fluid zigzag lines between the cones. Simple joys!

The Monster 797 is forgiving in nature, and by the time we finished the slaloms we realised how workable the 803cc engine is. There is a good amount of engine braking, so the bike always feels in control. But it is heavy, and you realise it when you're taking slow, sharp turns. The controls (clutch and brake) are thankfully light and once on the move, the bike's weight becomes your best friend to make it feel stable. We were soon going to get a taste of it all on a small track at the facility. Riding behind our instructors helped us learn the best lines on the track, as well as the optimal speeds we needed to maintain.

Left on our own, I started to tackle the track and the 797. The bike felt heavy through the slow-speed chicane. Next up was a left hander followed by a not-so-long straight. It was the first time we could open the throttle on the Monster 797 and experience the rush of the power going to the rear wheel. The motorcycle displays a dual character. As I saw earlier it felt so tractable even beginners can ride it; on the other hand, there is enough power in it to excite somewhat experienced riders. Importantly, the 797's power delivery is linear, so it doesn't scare you as you open throttle. A hairpin bend followed the straight, so it required me to shed speed quickly. The Monster 797 comes equipped with ABS as standard and there are two 320mm semi-floating discs performing duty at the front with radial-mounted Brembo Monobloc M4.32 calipers. The front brakes helped shed speeds really quickly and clearly these were speeds that barely teased the brakes. New riders would do well to learn to use the front brake smoothly as it has lot of bite!

Leaning into the next right-hander the Ducati felt so much in control that after a few laps I could carry more speed and lean further in as well. My mentor noticed my enthusiasm to ride, and told me to lighten the hold on the handlebar. I can still hear his words clear – “Handle is to steer, don't hang on to it.” He even taught me the 'chicken dance' which I could do to remove any twitchiness in my arms by loosening them and flapping them freely inside out.

I never wanted the ride to end. Importantly, I never wanted my trainer’s teachings to stop. The DRE is education, and the Monster 797 is involving and easy to ride. I always had this presumption about Ducatis being very track-focused, and since we were taken to a track, I had prepared myself for a track-oriented motorcycle. First impressions suggest that you can ride the Monster 797 enthusiastically, and at the same time it is so tractable that it can be used as a daily commuter. Parting with the Monster 797 wasn’t a happy feeling. The DRE, the trainers and the regime make you want to learn more and graduate to the next level. The combination of DRE and the Monster 797 made the joy of motorcycling obvious to all there.

Wondering what happened to the women in our group who didn't know how to ride? They joined us on the track later that day! Win!

Ducati has launched the Monster 797 in India at an introductory price of Rs 7.77 lakh ex-showroom Delhi. Given how well it balances ease of riding with likeable performance, could be a good choice for someone wanting to step into the fascinating world of ‘big bikes’.