The start-ups have got the ball rolling, but can a major manufacturer now take the EV game a step further and better the pioneers’ efforts? 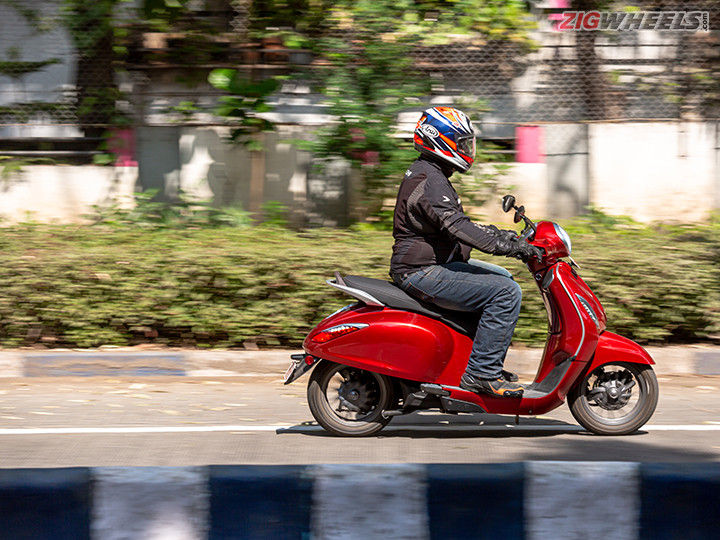 Electric scooters are a dime a dozen in India, with all shapes, sizes and top speeds available. Most of them, however, are poorly designed and/or built products from relatively unknown manufacturers/importers. The only start-up that has succeeded in impressing us so far has been Ather Energy. The Bengaluru-based manufacturer’s 450 e-scooter has set the benchmark in this segment, comprehensively outgunning everything else around. That ‘everything else’, though, has recently grown to accommodate the Bajaj Chetak. This marks the first entry of a major manufacturer into the electric mobility space, so can the might of Bajaj’s R&D department outclass the innovation of some very clever college graduates in the Garden City?

No, That’s Not A Vespa

If it wants to be the new king of the electrics, the Chetak needs to make a good first impression, and boy does it deliver. Yes, we know looks are subjective, but you'd be hard pressed to find someone who dislikes the Chetak's appearance. It's an electric, and it's smart, so you'd expect it to look futuristic, but the classic lines on the scooter result in a masterful execution of the neo-retro look. It harks back to its erstwhile namesake while still managing to be fresh and modern.

The trailing-link front suspension setup and single-sided rear swingarm mean that both of the very smart-looking 12-spoke alloy wheels are fully in display, which is a real visual treat. All the lights on the Chetak are LEDs and they look very smart, especially the horseshoe-shaped DRL around the headlight. This scooter is all about curves -- finding a sharp edge on the full-metal bodywork is quite a task. From the front fender to the apron to the side panels to the tail portion, all the gentle curves flow smoothly into one another and give the Chetak a rounded, friendly appearance.

Climbing aboard is a pleasant surprise because unlike many electric scooters we’ve tested so far, the riding position here feels quite conventional. The floorboard is at a reasonable height, the handlebars are placed right where you want them, and the seat is very spacious and well-padded too. It also tapers towards the front, making it easy for you to get your feet down at a standstill. Unfortunately, because of the way the single-piece seat is contoured, pillions might find themselves a little short on space, but we’ll give you a full verdict in our road test coming up soon.

Another thing you’ll notice when you get on is the premiumness of everything you touch and see. This certainly doesn’t feel like any other scooter out there -- all the switchgear feels very high quality and the materials used have an upmarket feel to them, as does the paint finish. The bezel around the circular negative LCD display looks very smart, and the screen itself is quite crisp and clear. Sadly, because of its white-on-black colour scheme and the reflective convex lens cover over it, it can be quite hard to read in bright daylight.

My first reaction when I heard about the 60kmph top speed was one of disappointment. I mean, that’s only half a step quicker than a horse-drawn carriage, right? It’s time to eat humble pie, though, because the Chetak isn’t short on performance at all. Sure, it doesn’t give you the same shove in your backside as the ‘Bangalore Bullet’, but the Chetak can comfortably keep pace with city traffic. And even though 60kmph was the figure we were given at the launch event, I saw the speedo climb all the way to 69kmph.

Truth be told, this scooter is seldom going to venture beyond crowded city streets, and in that environment, the motor’s 4.08kW peak power and 16Nm of torque are adequate, putting the Chetak on par with any 110cc scooter out there. What also helps is the sheer normalcy of the throttle. It’s a well-calibrated setup and throttle inputs return smooth responses; there is no lurchiness. Roll off the throttle and the theme of normalcy continues because the regen can be felt in action, and is quite akin to engine braking on a petrol-powered scooter.

There is also a marked difference in the riding experience between the two modes: Sport and Eco. In the former, the scooter feels reactive and immediate, quickly responding to changes in throttle position. This is the mode best suited to city riding, since it allows you to seize opportunities and gaps in moving traffic. If you do find yourself coming to the fag end of your charge, you can switch over to Eco mode. The ability to stretch each kWh of energy that little bit further comes at the cost of performance, and the scooter feels a bit dull and slow to react in this mode. On the upside, a large throttle opening will result in a kickdown (the scooter automatically switches to Sport mode temporarily), allowing you to comfortably complete an overtaking manoeuvre.

In our brief jaunt with the Chetak, we covered 22-odd kilometres, during which time we saw the charge indicator go from 100 per cent to 76 per cent. Most of this was carried out in Sport mode, which leads us to believe that Bajaj’s claims of 85km in Sport mode and 95km in Eco mode are quite accurate. We won’t have to rely on extrapolation for too much longer, though, because we will be range testing the Chetak as part of our full road test coming up soon.

When you see 10 per cent on the charge indicator, the scooter will enter a limp home mode, where performance and top speed are limited in the interest of charge conservation. And at 5 per cent, you will come to a dead stop. The battery won’t go down to zero and run dry. This is done to prevent the battery pack from completing a full cycle (since this reduces the lifespan of the pack), and also so that you can perform basic necessary functions like opening the seat and apron storage compartment, both of which are done using the battery. The 3.0kWh lithium-ion battery pack powering the Chetak gets a 3 year/50,000km warranty. The entire vehicle has an IP67 ingress protection rating, meaning that you don’t have to put the Chetak out of service during the monsoons.

Once down to 5 per cent, you’ll have to find a hobby for the next 5 hours while the Chetak fully charges up, though it’ll take only an hour to get up to 25 per cent. All charging is carried out via a conventional 5-amp home socket with no fast-charging option on offer.

Giving the new Chetak trailing-link front suspension just because the old one had it, seemed like the glorification of a blatant cost-cutting measure to me at first. I mean, why not extend that logic and equip it with steel wheels and a halogen headlight? Technology has moved on and so should the scooter. That being said, I must eat my words because Bajaj has put a lot of work into tuning the front suspension setup just right, to the point where it performs (nearly) as well as a telescopic unit.

Thanks to 12-inch wheels at both ends, it steamrolls most bumps at low speeds and the rider is left well insulated from the road surface. It’s only upwards of 40kmph that the Chetak’s slightly stiff setup allows sharper edges to filter through, and even at this point, things aren’t excessively uncomfortable. This isn’t supposed to be a corner-carver, so the verdict on handling is restricted to how the Chetak filters through city traffic. It feels light, agile, and easy to steer. Very little handlebar effort is required to place the Chetak in that newly formed gap in traffic.

The Premium variant we tested comes equipped with a front disc brake, and we found braking performance to be adequate, even if not class-leading. The combi-brake setup works well, with a strong tug at the left lever bringing the scooter to a halt quite quickly. A top-mounted caliper also means that the front-end dives under braking rather than rising like older trailing-link setups, so all the sensations are familiar as well.

That fancy display needs to be put to good use, right? Well, you can do that by hooking up your phone via Bluetooth, after which you can control music playback using a button on the left-hand side switch cluster. The display also shows you real-time range, state-of-charge, time, a trip meter, and a regen indicator. IoT connectivity, along with the Chetak app, allows functions such as vehicle location, geo-fencing, and vehicle status.

The 118kg kerb weight might seem a little daunting on paper (by scooter standards, at least), but the inclusion of a reverse mode ensures that shuffling the Chetak around is never an issue. Other very convenient features include keyless ignition, a retractable seat hook, and self-cancelling indicators (the ones at the rear are sequential too, which looks very swanky).

On paper, there is storage space both under the seat and in the back of the apron, but the underseat storage space is quite shallow, allowing you to house only a half-face helmet, and the apron storage compartment is filled up by the charging cable and first-aid kit/toolkit.

As you can probably tell, there’s no real dealbreaker with the Chetak so far. It does everything you ask of it, and then some, without throwing up any real flaws or issues in the process. So what’s the catch, then? Well, at Rs 1.15 lakh (ex-showroom Bengaluru, Premium variant), the price certainly isn’t a dealbreaker, but for even less money, you could get yourself an Ather 450 (Rs 1.07 lakh, ex-showroom Bengaluru) Bajaj Chetak Price.

The startup is offering you a more feature-rich scooter, with things like a touchscreen, navigation and fast-charging, none of which are available on the Chetak. It’s also considerably quicker, more exciting to ride, and even gets a rear disc brake over the Chetak’s drum. But while the Ather might have the Bajaj beat in the dash to 60kmph, the Chetak will beat the 450 to showrooms across India. The vastness of ProBiking’s sales and service network means that the Chetak will be available in close to 400 showrooms by July.

Considering that electrics are still very new, there is a strong sense of unfamiliarity which results in some hesitancy amongst prospective buyers. The sense of security offered by the Bajaj brand and the network that comes with it, could well be what it takes to convert the masses over to electric. 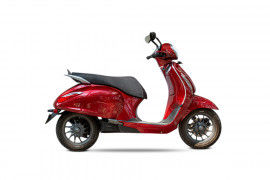 All Comparisons of Chetak