Royal Enfield has finally launched the much-needed ABS variant of the Classic 350. Let’s see how it fares against its only ABS-equipped rival, the Bajaj Dominar 400 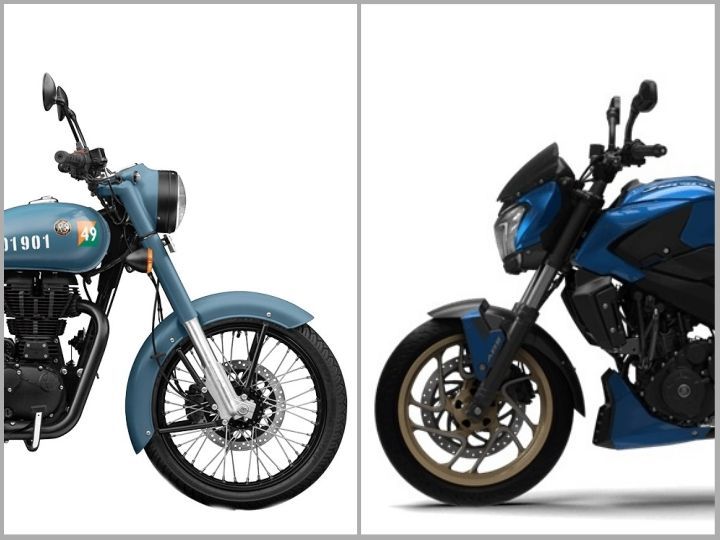 Royal Enfield has been selling its motorcycles with ABS in the foreign markets for quite some time now. The international markets have more stringent rules about ABS, and hence the bikemaker offers a dual-channel setup on the export bikes as standard. Now, the Indian government too will be making ABS mandatory for new and existing bikes displacing more than 125cc from April 2019. As a pre-emptive measure, the brand launched its first ABS-equipped motorcycle in the country, the Classic 350 ABS Signals edition. Not just that, Royal Enfield also confirmed that other models in its portfolio will also be getting ABS before the government’s deadline next year. In the Classic 350’s segment, the Bajaj Dominar 400 is the only motorcycle to get ABS. Let’s see how the power cruiser fares against this retro motorcycle, on paper.

The Royal Enfield Classic 350 ABS Signals edition has the same design language as the long-in-the-tooth Classic 350. However, its design is still timeless, with the round headlamp flanked by pilot lamps, which Royal Enfield calls the ‘Tiger Lamps’. There’s an interesting story behind this too. It was first fitted in the 350cc and 500cc Bullets and also the Meteor and the 500 Twin. Then in 1960, they were redesigned to look more distinct, and has been the distinguishing feature even in modern Royal Enfields.

The Classic 350 ABS’ instrument cluster is essentially the same as the one without ABS, but instead of the ammeter, Royal Enfield has provided a more useful low-fuel lamp and ABS light. In the standard Royal Enfield, there’s no low-fuel light nor a fuel gauge, thus forcing the rider to rely on the reserve knob. The fuel tank features a pair of side grips, and the seats feature premium dark tan covers, while the bodywork is painted in matte blue or matte brown. These colour variants are called ‘Airborne Blue’ and ‘Stormrider Sand’. The fuel tank features a unique stencilled serial number on each motorcycle, coupled with an insignia and a premium Royal Enfield logo. The powerplant, exhaust, frame and wheels have also been painted black. Other than these changes, the bike is the same as the regular Classic.

The Bajaj Dominar is based on the Pulsar CS 400 concept which the brand showcased at the 2014 Auto Expo. The modern power cruiser design goes well with the bike’s underpinnings too. We can’t deny that the motorcycle bears an uncanny resemblance (at least a little) with the Ducati Diavel. But that’s a good thing because the Dominar is a one-of-a-kind motorcycle in its segment in the country, and also manages to look good apart from being unique. Its lighting system is all LED, and the instrument cluster is fully digital too. The muscular fuel tank houses another small digital inset which has the tell-tale lamps. The rear is stubby, and gets a suitably designed exhaust, while the fat rear tyre rounds off the package rather well.

The Royal Enfield Classic 350 ABS Signals edition retains the same engine which the standard Classic uses. While the characteristic thump of the engine remains the core of Royal Enfield’s laidback riding experience, the Dominar’s powertrain delivers a relatively sportier ride. While we all know that the Dominar is any day faster than the Classic 350 both dynamically and on paper, it finally boils down to what the riders prefer. The Royal Enfield Classic’s engine character is ideal for those who want to cruise around town leisurely, admiring the surroundings while the Dominar is more about performance.

The Classic feels the happiest doing about 80kmph, while the Dominar is capable of cruising at triple-digit speeds with ease. You also get the advantage of slipper clutch in the Dominar which facilitates safer aggressive downshifting by preventing the rear wheel lock. However, because of all that sophistication (liquid-cooled engine, fuel injection and what not), the Dominar needs more expertise in servicing, while the Classic can be repaired by your average roadside mechanic should a breakdown occur.

The Classic’s spoke wheels with tube tyres have the vintage charm, but when it comes to handling punctures, the Dominar’s alloys with tubeless tyres are considerably superior. The radial layout of the tyre in Dominar offers better sidewall rigidity, thereby improving the cornering capability of the motorcycle. The Classic, on the other hand, is meant for leisurely riding, and is equipped with underpinnings accordingly.

When it comes to outright braking power, the Dominar is superior on paper, thanks to the larger discs. However, the inclusion of ABS in the new Royal Enfield should make the motorcycle a lot safer than it used to be.

The Dominar’s higher wheelbase will result in more straight line stability. However, the Classic’s heavier weight compensates the relatively shorter wheelbase for stability on straight lines. Its ground clearance is greater too, which is apt for Indian roads. The Dominar’s 10kg lighter weight, coupled with a more powerful engine, results in much better overall dynamics when compared to the Classic. The Classic has a slightly larger fuel tank, which should give it a decent riding range, but its only 0.5 litre bigger in capacity than the Dominar’s.

The Royal Enfield Classic 350 ABS Signals edition retails at Rs 1,61,984, while the Dominar 400 ABS commands a price tag of Rs 162,074 (both prices, ex-showroom Pune). For just an extra 90 bucks, you get a lot more modern engine, superior underpinnings and flashier design than the Enfield. But you can’t put a price on military heritage and the trademark ‘thump’, can you?