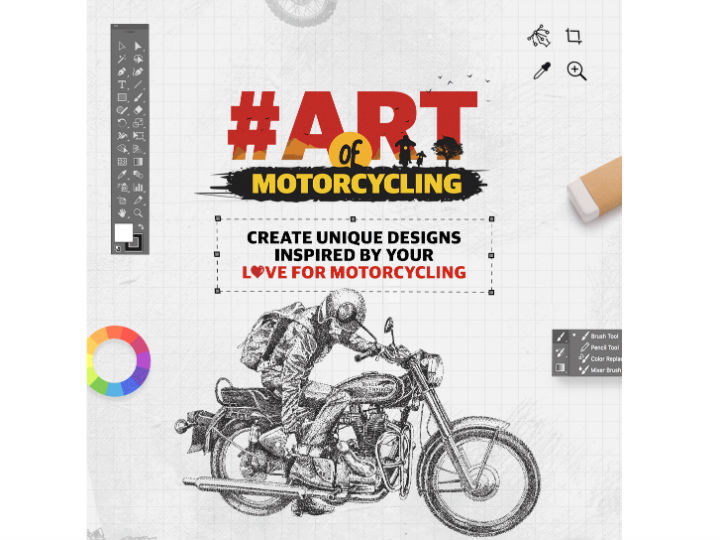 Nothing beats the sense of freedom offered by riding a motorcycle. But with the pandemic still raging on, riding has taken a backseat for many enthusiasts. So in a bid to keep the biking camaraderie alive and also to bring out the talents of artistically inclined motorcycle enthusiasts, Royal Enfield has come up with a new yearly competition, called the ArtofMotorcycling, in India.

The top five designs will be featured on Royal Enfield’s merchandise. Apart from helping garner more awareness of Royal Enfield’s authentic apparels and merchandise, we think there isn’t a better advertisement for your work than being featured there. The even better news is that winners will get a cash prize of Rs 30,000 each and one lucky winner will get to experience the Royal Enfield life by interning with the brand. The competition ends on September 10, 2020 and is restricted to India. Here’s Royal Enfield’s official press release:

New Delhi, August 13, 2020: Royal Enfield, the global leader in mid-size motorcycle segment, today announced the commencement of its first ever designing platform – ArtofMotorcycling, to fuel creativity amongst the artists, creators and motorcycling enthusiasts by bringing out their love for motorcycling. As part of its ongoing journey to empower the community and elevate the riding culture, Royal Enfield has conceptualized this annual competition to provide young riders/creators a platform to express their love for motorcycling through creative illustrations. The winners of the competition would get an opportunity to be a part of the brand in its artistic journey.

Also Read: Your Royal Enfield Needs Fixing? A Technician Will Be Arriving Shortly

The contest has been conceptualized in an effort to create a dynamic experience for the motorcycling community, riding enthusiasts, design students and illustrators that draws inspiration from their imagination and experiences on and off the saddle. Driven by the theme of self-expression, the contest is aimed at providing a platform to encourage the community to express themselves freely, follow their passion for riding and take a step ahead in their journey of self-exploration and expression.

For participation, candidates can head over to the #ArtOfMotorcyling section on Royal Enfield’s website to register and download the toolkit. Participants can then create their own unique design and share it on Instagram, tagging @royalenfield and using #ArtOfMotorcycling #REApparel. The top five designs/illustrations of this challenge will get featured/printed on the official Royal Enfield merchandise, and the winners will get a sum of INR 30,000 each and one lucky winner will earnan opportunity to intern with Royal Enfield.

Speaking about the new contest, Mr. Puneet Sood, Head – Apparel Business, Royal Enfield said, “#ArtofMotorcycling’ is a unique creative platform that draws inspiration from the dreams and journeys of young creators and motorcycling enthusiasts giving them an opportunity to express their love for “the motorcycling way of life”. We, at Royal Enfield, are really excited about bringing this platform to life as it focuses on one’s imagination, experiences, passion for riding and the never ending quest towards self-exploration and self expression.”

In essence, ArtofMotorcycling is a programme conceptualized to pay homage to Royal Enfield’s relentless quest for design perfection and celebrates dreams, passion, and determination of young creators, inspiring people along the way.