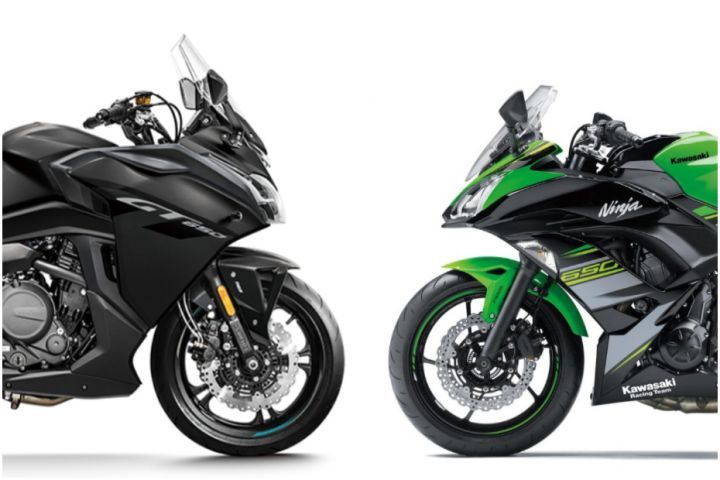 Chinese brand CFMoto has introduced the 650GT in India at a jaw-dropping price of Rs 5.49 lakh (ex-showroom). At this price point, it undercuts its rival, the Kawasaki Ninja 650, by an impressive Rs 40,000. To add to this, the bike comes with a host of features that pretty much trumps the feature list of the Kwacker. That said, the latest iteration of the Ninja 650 has a lot going for it on paper. So will the CFMoto 650GT hold its own or crumble against its rival? We pit them against each other on paper to find out.

The Kawasaki Ninja 650 with its new-generation engine feels more lively compared to the previous-gen bike. And this shows in the way it delivers its power. You also have a lot more power and torque at your disposal and a 30kg weight advantage over the 650GT. While we haven’t ridden the GT, the Kwacker’s clear weight and power advantage should help it get off the line a lot quicker.

That’s not all, the Kawasaki’s lower compression ratio should help it run cooler compared to the 650GT, at least theoretically. Furthermore, the inclusion of a slip & assist clutch will enable you to slam down a couple of gears without having to worry about wheel locks.

The sheer width of the CFMoto 650GT could prove to be a bit problematic while squeezing through city traffic. Its width paired with a weight of 226kg (kerb) could be quite a handful while making slow speed turns. What the 650GT has going for it is a higher ground clearance - perfect for Indian road conditions - a tall adjustable windscreen and a generous 19-litre fuel tank which should help you munch in miles with ease.

On the contrary, the Kawasaki Ninja 650 is more on the sportier side with the ability to tour if need be. Moreover, its compact proportions, easier to reach handlebars, lower seat height and weight will prove to be beneficial for shorter riders.

Both bikes stand shoulder to shoulder in terms of cycle parts, however, the 650GT’s suspension setup is claimed to be on the softer side in order to carry the extra weight. That’s also a plus, since a softer sprung suspension setup would be better equipped to handle our Indian road conditions. On the flipside, the Ninja 650 has chunkier forks and tuned to be more pliant. Also, thanks to its lower weight, the Kawasaki Ninja 650 should prove to be a better handler theoretically.

To put it simply, if you’re looking for a proper tourer with comfortable ergonomics and features befitting its touring capabilities, we’d suggest the CFMoto 650GT. Besides this, you have a tonne of features like a 5-inch full-colour TFT screen, an adjustable windscreen, all LED lighting and proper big bike looks - all while saving Rs 40,000 over the Kawasaki Ninja 650.

Having said that, if you’re planning to use the bike for brisk weekend rides, and hope to tour occasionally, the Ninja 650 fits the bill.