The motorcycle has been spotted without camouflage ahead of its launch 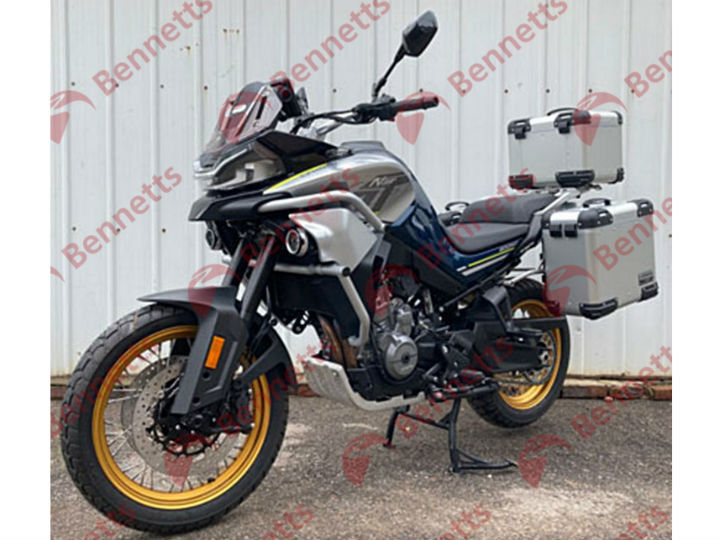 Back in October, we got to know that CFMoto is working on a KTM 790 Adventure-based bike when the camouflaged pictures of the CFMoto 800MT surfaced online. Now, the uncamouflaged images of the same bike have been leaked, hinting at the possibility of it being almost production-ready. Expect CFMoto to launch the bike abroad in early-2021.

The CFMoto’s Kiska-sourced design genes are quite evident in the 800MT. The futuristic-looking, sleek LED headlamp is complemented by a pair of auxiliary lamps, which is likely to be offered as an option. Playing around off the road may not punch a hole in your pocket thanks to the inclusion of a full-length crash guard. It also gets a whole suite of luggage options, including two hard-case panniers with saddle stays and a top box. The instrument cluster is likely to be a full-colour TFT unit with smartphone connectivity and turn-by-turn navigation. To ensure the best balance of practicality and off-road capability, the bike comes with a pair of spoke wheels with tubeless dual-purpose tyres. Rounding off the feature list are the centre stand and the aluminium bash plate.

As far as the powertrain is concerned, like most of its products, this one too gets KTM-derived bits. The CFMoto 800MT’s engine will be derived from the KTM 790 Adventure, which produces 95.1PS and 88Nm in the Austrian bike. It remains to be seen as to how this engine will be tuned to suit the character of the 800MT. Underpinnings are also up to modern standards, with dual disc brakes up front with radial calipers, inverted front fork, and a rear monoshock. The kerb weight is reported to be 231kg, which is a bit heavier than the KTM 790 Adventure’s 189kg dry weight.

CFMoto’s Indian operations have been affected by the BS6 transition as well as the ongoing coronavirus pandemic. But fingers crossed, we hope to see this motorcycle on our shores by mid-2021. By then, CFMoto should have updated its existing lineup in India and business should be stable. It will go up against the Triumph Tiger 900 and the Ducati Multistrada 950.