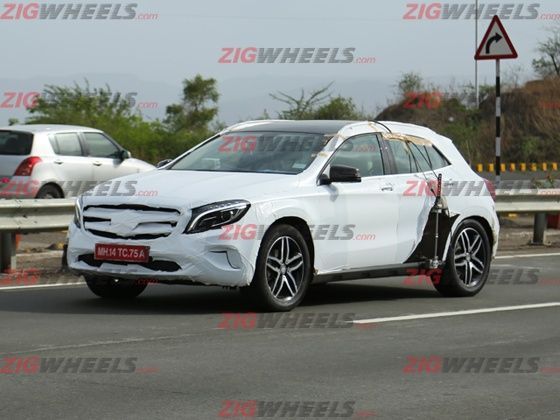 The Mercedes-Benz GLA is not only an important car for the compact luxury SUV segment but is possibly the most important launch for Mercedes-Benz for the foreseeable future. Its biggest rivals, the BMW X1 and the Audi Q3 have both been in the market for a few years now and have been instrumental in shaping the segment for what it is now. Mercedes-Benz’s entry into the compact-SUV segment has been late but with the GLA’s coupe looks fused into a compact SUV dimension, a choice of both petrol or diesel engine and a Mercedes-Benz badge up front is most likely to ensure success.

The Mercedes-Benz GLA, as seen here undergoing some sort of performance testing with a Correvit sensor attached to its rear doors is the GLA200 CGi version with a 1.6-litre, 4-cylinder, turbocharged, direct injection engine making 156PS of peak power at 3500rpm and 250Nm of peak torque between 1250–4000rpm. This Euro 6 compliant engine will be capable of propelling the GLA200 from 0-100kmph in 8.9-seconds on to a claimed top speed of 205kmph.

The Mercedes-Benz GLA will also come with a new 2.1-litre, 4-cylinder, turbocharged diesel engine, which is expected to be a best seller. Badged the GLA200 CDi, the engine produces 136PS of peak power between 3400–4000rpm and 300Nm of peak torque between 1400–3000rpm. With a top speed of 205kmph and a claimed 0-100 time of 10-seconds, the diesel is slower than the sportier petrol. Both the petrol and diesel engines will be mated to Mercedes-Benz’s tried and tested 7G-DCT automatic transmission with a dual clutch setup.

The GLA seen here is the fully loaded Edition 1 or a Launch Edition version and is running on AMG-spec 18 or 19 inch wheels and a set of sportier bumpers. The rear bumper with its integrated tail pipes too exudes a sense of sportiness. The coupe like profile with the large sunroof too makes the GLA look rather desirable. We can expect the Mercedes-Benz GLA to be launched in India in the next few months and priced between Rs 25-35 lakh (ex-showroom). There will also be an all-wheel-drive or 4Matic model of the GLA and an AMG powered GLA45 version that follows.