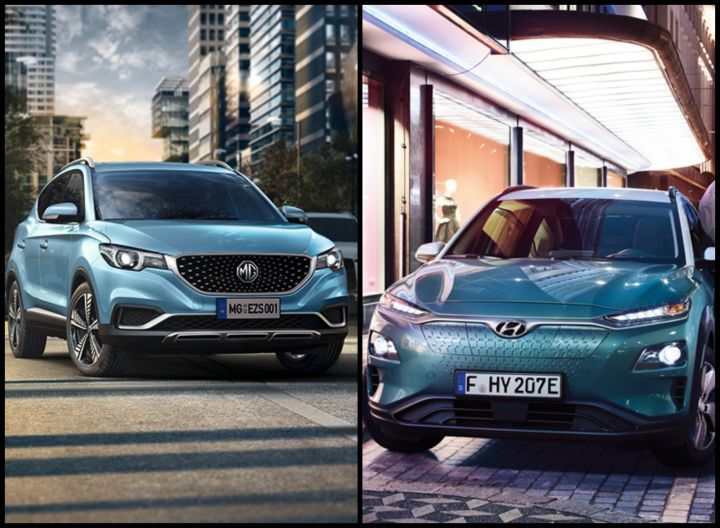 British Marque MG Motor is all set to enter the Indian market with its premium mid-size SUV, the Hector. With the launch expected in June this year, MG is focusing on bringing tech-laden products in India in order to disrupt the local market. While Hector is set to be among India’s first connected SUVs, MG will follow up its launch with the all-electric eZS in December this year. Together with the Hyundai Kona Electric, which will also launch within this year, the MG eZS will mark the dawn of long range all-electric SUVs in India. At present, the EV market in India is quite stagnant, with the only offerings being the Mahindra eVerito and the e2oPlus. Both Hyundai and MG are merging two of the biggest trends in the automotive industry -- SUVs and electric vehicles.

MG unveiled the India-bound eZS in China recently while Hyundai had already announced that it will bring the Kona Electric by the second half of this year. So let us peg two of the hottest upcoming all-electric SUVs against each other and see how they stack up on paper.

The MG eZS trumps over the Kona electric when it comes to dimensions. So, if size coupled with presence is what you’re on the lookout for, then the MG eZS fits the bill perfectly. Where the Kona Electric gains ground is with its wheelbase; it has an advantage of 15mm over its British counterpart.

As far as powertrain figures go, the Hyundai Kona is ahead of the game with more power, torque and range. While the maximum range of both SUVs is as per the older NEDC (New European Driving Cycle) test protocols, this figure is about 30 per cent lower under the new WLTP (Worldwide Harmonised Light Vehicle Test) protocols.

The Indian versions of both these cars, though, are likely to come with more realistic range figures. MG India is claiming a range of around 350km for the eZS, while the India-spec Kona Electric is likely to come with a range of 312km. To put that into perspective, both the e2o Plus and the eVerito have a maximum claimed range of 140km. For the range conscious, that translates to a figure which is very practical for the Indian market. The MG eZS charges to 80 percent 24 minutes quicker than the Kona Electric, which is impressive.

The comparison represented above is based on the UK-spec versions of both the SUVs, but we expect Hyundai and MG to offer the same list of features for the Indian version.

The British marque will offer the eZS with its latest innovation in connected car tech called the iSMART system. Set to debut in the upcoming Hector SUV, the i-SMART uses an Android-based tablet with 4G connectivity on the Hector. On the eZS, this system is likely to be incorporated within an 8-inch touchscreen. This M2M connection will be used to control features like emergency calls, vehicle status, remote control for the sunroof, tailgate, door lock, and a whole lot more.  Apart from these features, a panoramic sunroof will also be available.

The Hyundai Kona electric, on the other hand, will get a host of features like  Bluetooth connectivity with voice recognition, 7-inch driver's supervision instrument cluster, head-up display, and interestingly a virtual engine sound system (as the fully electric SUV is close to silent, it emits a melodic driving sound to alert pedestrians, cyclists and the visually challenged).

Currently, all-electric SUVs are a novelty in India. But with the debut of the eZS and Kona Electric later this year, things are about to change. These two fully electric SUVs will kickstart a new segment in India. While the Kona Electric will launch by August 2019, the MG eZS will come around December 2019. Both SUVs are expected to come with a price tag of around Rs 25 lakh (ex-showroom).