Should you spend the extra dough over the Nexon EV to get a ZS EV or a Kona Electric? 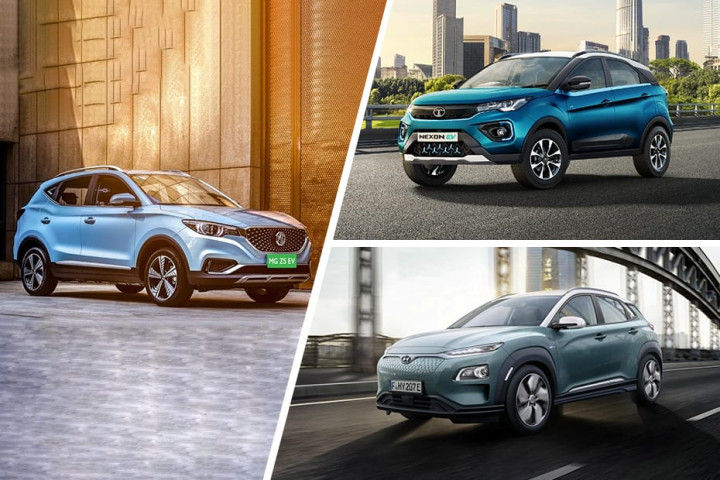 Tata Motors has launched the Nexon EV in India with prices starting at Rs 13.99 lakh (ex-showroom). This makes it one of the most affordable long range EVs in the country. At present, the sub-4 metre SUV doesn’t have any direct rivals apart from the Hyundai Kona Electric and MG ZS EV. So should you spend the extra dough for the more premium EVs or save your cash by opting for the Nexon EV? Let’s find out:

The price difference between the top-spec Nexon EV and its rivals is around Rs 7.70 lakh.

The Nexon EV is at a disadvantage when it comes to size. Thanks to its sub 4-metre length, it is the smallest in this bunch in terms of overall length and wheelbase. However, the Tata is the widest and the second tallest car here.

In terms of overall size, the MG ZS EV is the biggest, followed by the Hyundai and Tata. That said, the Hyundai Kona Electric has the longest wheelbase here.

In terms of features, the Nexon EV gets its bases right. Just like its rivals, the Tata comes with a touchscreen infotainment with Android Auto and Apple CarPlay, climate control, connected car technology, a sunroof, climate control, cruise control, drive modes as well as keyless entry with push-button start.

However, it lacks niceties like a powered driver seat, ventilated and heated seats as well as a wireless charger, features present in the Kona Electric. Surprisingly, the MG ZS EV misses out on automatic climate control while the Kona Electric doesn’t have connected car technology.

All models here come with a minimum of dual airbags, ABS with EBD, rear parking sensors, a rear view camera and ISOFIX mounts. The Kona Electric and ZS EV are offered with side and curtain airbags, electronic stability control and a tyre pressure monitor as well.

The Tata Nexon EV’s electric motor develops 129PS and 245Nm. Yes, power and torque figures are less when compared to the ZS EV and the Kona Electric. That said, it’s as quick as its rivals in the 0-100kmph run, covering it in a claimed 9.9 seconds. In comparison, the Kona Electric is just 0.2 seconds quicker than the Tata while the MG ZS EV is the fastest here.

The Tata Nexon EV utilises a 30.2kWh battery pack which is quite small when compared to its premium rivals. However, it has an impressive ARAI tested range of 312km. On the other hand, the Kona has the highest ARAI tested range here while MG claims the ZS EV will do 340km in a single charge.

All three models come with fast charging capability. The Nexon EV can charge from 0-80 percent in 1 hour while the Kona and ZS EV takes 57 minutes and 50 minutes respectively.

The Tata Nexon EV has some disadvantages when compared to its rivals. It’s a size smaller and is not as powerful as its bigger rivals. That said, the Nexon EV provided us with a rewarding experience when we drove it. It also comes loaded with all the features one needs, and the specifications are impressive when you consider its price tag. Further, the nearly Rs 8 lakh savings over its premium rivals makes it an even more tempting proposition.