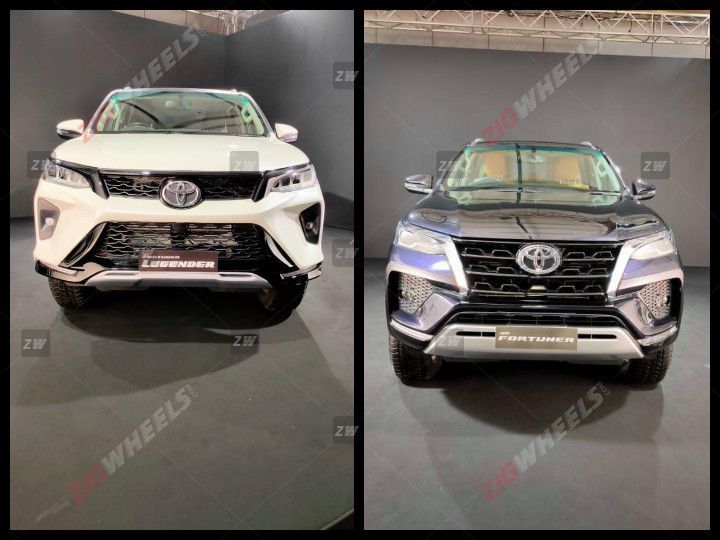 The facelifted Toyota Fortuner, which has just been launched at Rs 29.98 lakh (ex-showroom), is offered in two broad trims: Standard and Legender. The latter comes with its unique design and aims to appeal to the urban crowd with more features. Before we delve into the details, here’s how much extra you need to shell out for the updated model:

The updated Fortuner commands a premium of up to Rs 3 lakh over the standard model. The Legender variant is Rs 2.74 lakh dearer than the diesel 4x2 AT variant it’s based on.

Both variants get a host of cosmetic updates, but the Legender looks more premium with its Lexus-esque fascia, muscular bumpers, and a different pair of LED headlamps. The standard variant with its larger slatted grille and new LED headlamps is more of an evolution of the outgoing model’s design. The use of chrome is also more minimal, lending it a classier look in our books.

The silhouette remains similar to the existing model, however, Toyota has spruced it up with new alloy wheels. The Legender variant comes with split-five-spoke dual-tone rims while the standard model utilises split-six-spoke monotone wheels. At the rear, both SUVs come with new LED detailing for the tail lamps, and refreshed bumpers.

The basic dashboard layout is similar to the outgoing model, however, Toyota has utilised a different colour scheme for a breath of fresh air. The standard model comes with tan or all-black upholstery while the Legender variant utilises a sportier black and maroon theme.

It comes with a host of new features, with the primary addition being a new infotainment system featuring a larger 8-inch screen with Apple CarPlay and Android Auto as well as connected car tech. Other new features are mentioned below in the detailed table:

Toyota offers the facelifted Fortuner with a 2.8-litre diesel engine that develops 204PS of power and up to 500Nm of torque (420Nm in MT variants). It’s 27PS more powerful and 50Nm torquier (AT variants only) than the outgoing model. The 166PS 2.7-litre petrol engine will remain unchanged. The diesel engine comes paired with 6-speed manual and 6-speed torque converter automatic transmissions while the petrol manual variant relies on a 5-speed manual gearbox.

The diesel engine only can be had with the optional four-wheel drive system (now comes with electronic differential lock) while other variants including the Legender drives its rear wheels. There are also three different drive modes: Eco, Power and Normal.

The Fortuner Legender is ideal for those looking for a premium experience while the standard model should suffice as a butch and tough full-size SUV. It renews its rivalry with the Ford Endeavour, MG Gloster, and the Mahindra Alturas G4. Prices start from Rs 29.98 lakh and goes up to Rs 37.58 lakh (ex-showroom).