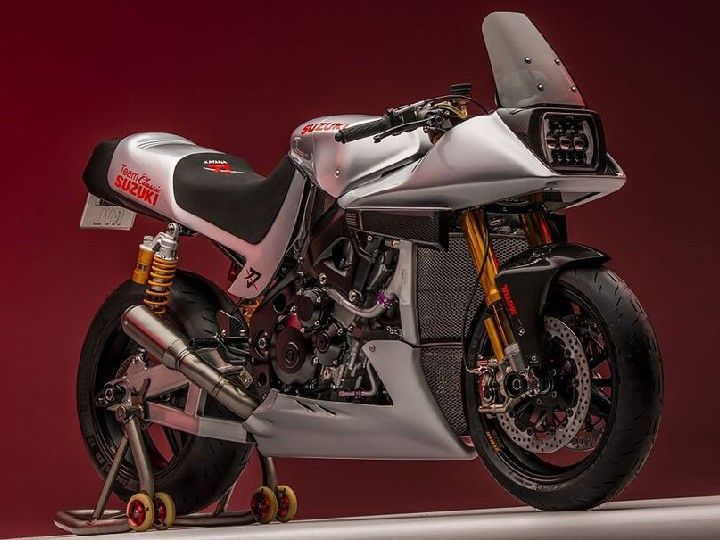 Team Classic Suzuki, the Japanese brand’s official team for historic motorsports, has taken the wraps off its Suzuki Katana race bike. The team, based in Great Britain, had been dormant for over a year, thanks to the COVID-19 pandemic, which led to the onset of this unique ‘lockdown project.’

Well, it's quite evident what the team had in mind for this project. From the outside, the bike is based on the legendary Suzuki Katana. Its front end in particular is reminiscent of the production bike bearing a rectangular darkened LED headlamp housed in a carbon fibre cowl. Further modifications include a specially sculpted fuel tank, a flat seat with embroidered Katana badging, and a chunky tail section with Team Classic Suzuki decals , all of which are biased towards racing. Making the Katana race bike even more purpose built are bits like carbon fibre air ducts, a taller smoked windscreen, aluminium rear sets, and a sleek swingarm.

What It Actually Is

The bike might be a Katana from the outside, but underneath the bodywork lies a WSBK-spec GSXR-1000 race bike from 2008. This  999cc, inline-four cylinder motor employs race-specific internals and puts out 202PS. And in true motorsport fashion, it is paired with a racing oil-cum-water cooling system and a Racefit full-system exhaust that ensures an angry growl. Meanwhile, a Yoshimura EM Pro kit ECU keeps the bike on a leash

Everything is held together by a race-spec chassis, again, from the GSXR-1000 race bike. Suspension duties on the Katana race bike are courtesy of a top-notch Ohlins USD fork and dual shock absorbers. The bike rides on classic 3-spoke forged wheels from Dymag and braking duties are handled by the best in the business, Brembo.

So, Can You Buy One?

Well, Team Classic Suzuki has left everyone on a cliffhanger as they’ve skipped the announcement on prices or even whether this project will be made available to the general public. What we do know, though, is that if this bike was in the right hands, it would easily smoke some modern-day superbikes on the track.

However, if you’re looking for a potent track weapon here, check out the recently launched BS6 Ducati Panigale V4!