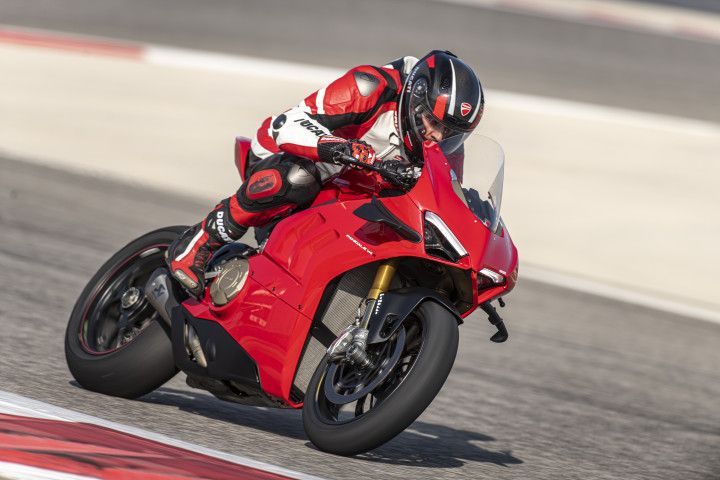 Ducati has launched its flagship superbike, the 2021 Panigale V4 n India, at Rs 23.50 lakh (ex-showroom). The more premium V4S variant will set you back by an additional Rs 4.90 lakh. Interestingly, the bike received its last update in 2020 with a new aerodynamic package, small engine tweaks and hardware updates.

Both the standard Panigale V4 and the V4S now get MotoGP-inspired winglets and cooling vents, a feature that was originally only set aside for the more hardcore V4 R. The fairing is now wider by 76mm compared to the older models while the windscreen is taller and more angled, which lowers the airflow impact on the rider and maximises aerodynamic efficiency. All this leads to 30kg of downforce at 270kmph, which means the bike’s front end is less likely to float at high speed or wheelie when you aggressively open the gas.

While the output figures for the 1103cc V4 remain unchanged (214PS, 124Nm), Ducati has tweaked the throttle maps for more linear power delivery. The torque curve is also smoother in the first 3 gears depending on the selected power mode.

A bike this demanding requires a suspension setup that can handle severe lateral forces as well.
So to improve the V4’s handling, Ducati has revised the bike’s suspension setup with emphasis on suspension stiffness, centre of gravity and chain force angle. All of which results in a bike that’s easier to turn into corners, gets to the apex faster, and soaks up any pits or ripples more effectively.

The Panigale V4 already came packed to the teeth with rider aids such as cornering ABS, wheelie control, launch control, engine brake control and more. But the 2020 model kicks it up a notch with Ducati’s EVO 2 traction control, which the company says will improve the bike’s handling in corners.

The only underlying difference between the standard V4 and V4 S is that the S features premium electronically adjustable Öhlins suspension, lighter Marchesini forged aluminium wheels and a lithium-ion battery.