Tata is all set to launch its next sensation, the Tigor 'Styleback'. These are 5 things you cannot afford to not know! 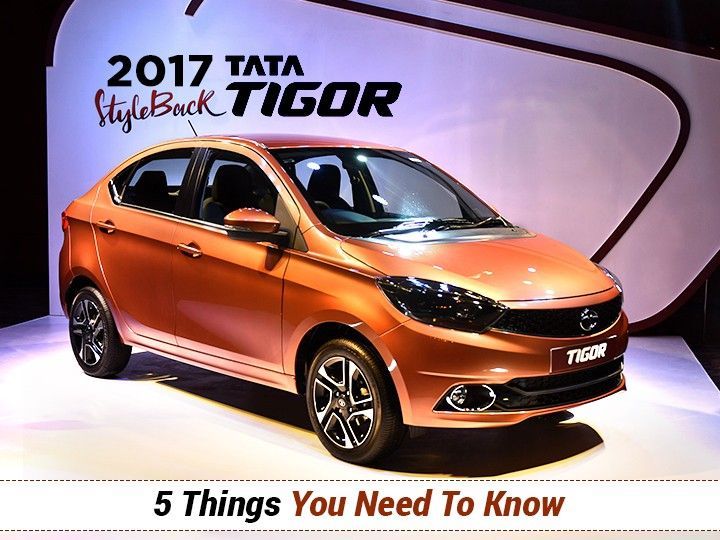 We expect Tata to price the Tigor aggressively, undercutting the rest of the sub 4-metre sedan competition significantly. The Tata Tigor may be priced from Rs 4.2 lakh and Rs 6.5 lakh, ex-showroom.

The Tigor shares its platform with the popular Tiago hatchback and hence also shares its powerplants.

The diesel variants of the Tigor will be powered by a 1.05-litre (1047cc), 3-cylinder turbocharged 'Revotorq' motor developing 70 PS of maximum power at 4,000rpm and 140Nm of peak torque between 1,800-3,000rpm. The engine output is the same as the Tiago, but this motor will be working harder as it propels a car that is 50kg heavier.

The petrol variants of the Tigor will be powered by a 1.2-litre (1199cc), 3-cylinder naturally-aspirated 'Revotron' motor developing 85PS of maximum power at 6,000rpm and 114Nm of peak torque at 3,500rpm. Again, the engine output is the same as the Tiago, with the engine now pulling an extra 38kg.

Both the engines are paired to a 5-speed manual transmission with power being sent to the front wheels. Tata has not confirmed if the 5-speed AMT transmission (paired to the petrol motor in the Tiago) will also be offered with the Tigor. Tata has not yet revealed the official fuel-efficiency figures of the car.

In terms of design, it is easy to see that the Tigor shares its face with its hatchback sibling. What sets it apart are the headlamp clusters; these are fully blacked out, get dual-element headlamps (with the outer units being projectors) and repositioned indicators.

When looked at from the side, it is easy to see the effort Tata has put into the Tigor. The notchback ('Styleback' in Tata-speak) design is evident, with the roof smoothly flowing into the boot. There is no three-box design that is usually associated with a sedan. Highlights here include a prominent chrome window line, a quarter-glass on the rear door and 5-spoke alloy wheels.

The rear has been worked on to make it look slimmer than it is. The roof-mounted spoiler is unique and houses a high-mounted stop lamp that stretches from end-to-end à la Audi A7/BMW 6-Series. The boot features a lip-like spoiler. The horizontal taillamps extend onto the boot and are intersected by a chrome bar. The bumper gets the reversing lamps and fog lamps and a thick black bar.

Like the exterior design, the interior of the Tigor borrows a lot of elements from the Tiago. The highlights here include the three-spoke steering wheel with integrated multi-function buttons, analogue dials flanking a digital MID in the instrument cluster, a hexagonal centre console housing the centre AC vents, infotainment system and other buttons and body-coloured surrounds for the outer AC vents.

The infotainment screen is a 5-inch touch unit with smartphone integration and is connected to an 8-speaker system. The door pads feature fabric upholstery instead of plastic for a premium feel. The rear seats feature individual headrests for all three passengers and a centre armrest for extra comfort.

The Tigor is expected to be a spacious car; the 50mm increase in wheelbase over the Tiago is expected to release more space for all passengers. The notchback design has also resulted in a lot of luggage space which is evident by 419-litres boot.

Considering how aggressively priced the Tigor could be, the very fact that you could buy a sedan at its price will be the most impressive standout feature! Here are some more features which should make the Tigor very popular once launched:

It seems like the Tigor is poised to be another winner from Tata's stable. Stay tuned for the first-drive review and detailed comparisons.