KTM 890 Adventure R: The Most Hardcore KTM Adventure Bike Yet

It comes in a Rally version too! 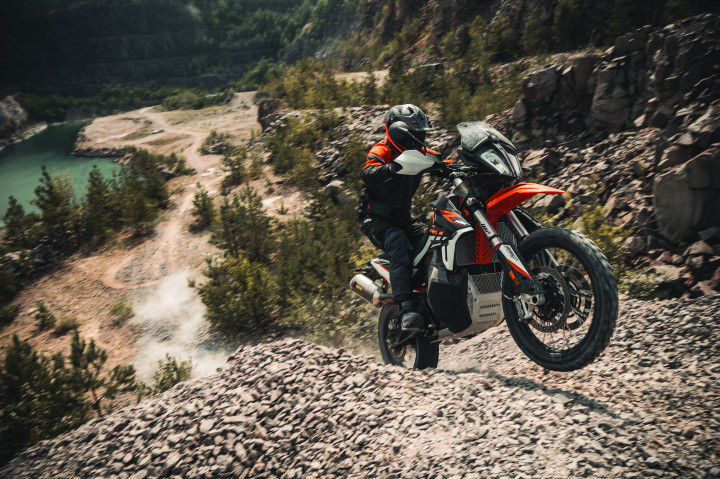 KTMs are usually not for the faint-hearted. The company has built a rich heritage on providing motorcycles that excite you, thrill you and, in some cases, even scare you silly. Its off-roading pedigree is beyond the reach of most rivals, and it shows in its adventure models, the latest one of which is perhaps the most hardcore and mental of them all! The KTM 890 Adventure R is here to conquer literally every terrain.

Don’t mistake it for just a 790 Adventure with a larger heart. The Austrian brand has carried out a lot of development work to make it one of the most capable off-road bikes to roll out of Mattighofen (or soon to be Hangzhou, China). It looks nearly identical to the 790 Adventure, but the addition of the R suffix means KTM has taken things up a notch. You still get the same fanged LED face with a short windshield, tank extensions that reach as far ahead as the chunky USD fork, and the fuel tanks that continue to be low-slung rally-style units. Just like the 790 ADV R, the 890 ADV R too gets the enduro-style long front fender, flat rally seat, and heavy duty crash protection bits as standard.

Under the skin though, the ChroMoly steel frame features a new re-forged aluminium steering stem which has shed a few grams while making the chassis stronger. A new lighter and stiffer steel trellis subframe is found on the 890 ADV R, which has raised the seat height to a whopping 880mm! The trade-off though is that it has enough ground clearance for a baby to crawl under it, 263mm to be precise. Plus, the handlebars are still wide, the serrated footpegs are wider than the 790’s, and the triple clamp is made from the same high-strength aluminium like the steering stem.

The 890 ADV R shares its engine with the 890 Duke R. Admittedly, it has had to be retuned to suit the adventure motorcycle. 105PS and 100Nm are by no means small figures, especially when you consider that this is an off-road-oriented product. Even the Honda CRF1100L Africa Twin, which packs a larger 1,084cc parallel-twin motor, produces roughly the same output. KTM states this new engine has 20 percent more rotating mass that adds to better driveability in low- to medium-speed riding situations. The motor has undergone internal updates to take the additional stress of off-road riding. The six-speed gearbox has been optimised for the bike as has the slip-and-assist clutch.

While the 890 ADV R doesn’t offer more electronic rider aids than the 790 ADV R, KTM says everything has been calibrated to offer an even more precise experience. You have nine levels of lean-sensitive traction control, disengageable cornering ABS, a few throttle maps and finally cruise control, just in case you ever decide to take the tarmac route on your way back home. A bi-directional quickshifter is an optional fitment.

On the 890 ADV R, you find nearabout the same top-spec suspension hardware that KTM runs on its Dakar-racer: the 450 Rally. The WP Xplor 48 USD fork is fully-adjustable while the Xplor monoshock gets added low-speed and high-speed compression adjustability. Four-piston monobloc calipers act on twin 320mm discs on the front wheel while the rear end gets a 260mm rotor with a two-piston caliper. 21-/18-inch spoke rims were a given for a bike with such capabilities, as the wheels come shod with Metzeler Karoo 3 dual-purpose tyres.

If you still think the 890 ADV R isn’t that serious, (I mean, are you related to CS Santosh, Ashish Raorane or Kartikeya Singhee?) KTM also has the Limited Edition 890 Adventure R Rally. Everything is a lot more serious here: 910mm seat height, 303mm ground clearance, 270mm suspension travel at both ends, carbon-fibre tank protection and rally-style footpegs. With the added capability, KTM has produced a stellar off-roader that can not only cross over mountains but also jump over them. It is limited to 700 units only with pre-orders already open internationally.