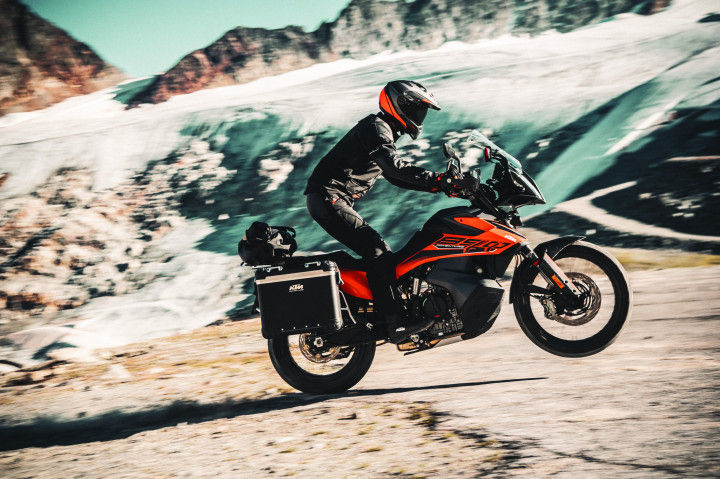 After dazzling us with the 890 Adventure R a fortnight ago, KTM has now brought out the sedate and sensible 890 Adventure. By dropping the ‘R’ suffix, the 890 Adventure will be the base trim in this model series but with enough off-road credentials that we have come to expect from the bikes rolling out of Mattighofen. So, where has KTM compromised to make the 890 Adventure more sensible?

Not in the engine department, certainly. The 889cc parallel-twin engine generates the same 105PS and 100Nm as the R. IMU-based electronic rider aids are also present aplenty. The engine has been upgraded to meet Euro 5 norms and is likely to be the one to lead the charge for KTM in the middleweight department. The 790 might just be downsized to make it more accessible for a lot of people (head here for all the dope).

Even though this is the base model, it gets the same set of features as the R. Typical KTM-toothed LED headlights, sharp tank extensions, rally-style side-slung fuel tanks and a large colour TFT dash. The only major visual difference is the beak. The R gets an enduro-inspired front fender while the standard 890 ADV gets a conventional unit.

Ultimately, what sets the 890 ADV and the 890 ADV R apart is the equipment on offer. While you get higher-spec WP Xplor adjustable suspension on the R, the 890 ADV has to make do with WP Apex units. The USD fork is non-adjustable while the monoshock gets only preload and rebound adjustability. Thankfully, these units still have loads of suspension travel: 200mm at both ends, 40mm less than the R. As a result though, the bike has become a lot more accessible without compromising too much on ground clearance. Here’s how different the seat height and ground clearance are:

With the arrival of the 890 Adventure, it is highly likely that the 790 Adventure platform might just be shelved off, replaced by a new 750cc. The 890 Adventure could be the one that becomes our first big KTM adventure motorcycle. If KTM does manage to price it around the Rs 11.5 lakh mark, they will have a winner on their hands.