Aside from SUVs, we also saw concepts, EVs and models from the performance-focused N brand. 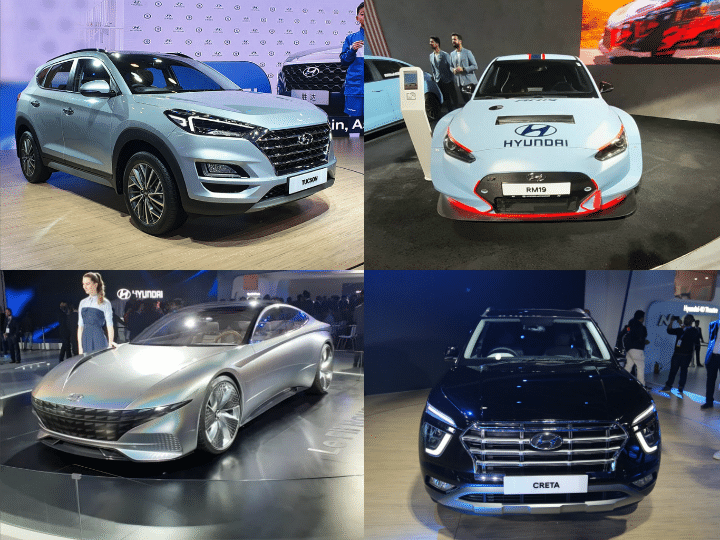 Hyundai Motors finally showcased its lineup at Auto Expo 2020. The lineup was dominated by SUV unveilings in the form of the 2020 Creta, Tucson Facelift and Nexo Fuel Cell. We also got to see the debut of a turbo-petrol variant of the Grand i10 Nios hatchback. Concepts Le Fil Rouge and the Kite EV also made a presence. Rounding off Hyundai’s pavilion were two models from the carmaker’s performance-oriented N brand -- the i30N and the RM19 prototype. Here’s more about them in detail:

Kicking off Hyundai’s SUV assault at Auto Expo 2020 was the reveal of the Tucson facelift. Exterior updates include a new grille, sharper LED headlamps, new bumpers, and revised tail lamps. On the inside, it gets a new floating touchscreen infotainment system. It is powered by BS6-compliant 2.0-litre diesel and petrol engines. Head here for details.

The highlight for Hyundai was the debut of the 2020 Creta. Based on the Kia Seltos, it gets a revamped exterior design. A sneak peek of the interiors reveal differences from its Chinese counterpart, the ix25. Under the hood, it will be powered by the Seltos’ 1.5-litre diesel and petrol engines, with the 140PS 1.4-litre turbo-petrol also on the cards. To know more about when the new Creta could hit showrooms, head here.

We saw the carmaker make a return to sportiness with the unveiling of the Grand i10 Nios Turbo. It gets a new front bumper and grille as well as a 1.0-litre turbo-petrol engine similar to the Hyundai Aura. It produces 100PS of power and 172Nm of torque, paired to a 5-speed manual gearbox  with a different gear ratios. Find out when you can expect the Grand i10 Nios Turbo in Hyundai showrooms.

A radical concept in the form of the Kite EV featured at Hyundai’s pavilion. What’s radical you ask? Well, it can be converted from a buggy into a jet ski. It is powered by four brushless motors positioned inside the wheels for when it’s in the buggy setup and a water-jet turbine for its jet ski setup.

A svelte grand tourer concept in the form of the Le Fil Rouge was one of the most eye-catching concept cars showcased at Auto Expo 2020. First unveiled at the 2018 Geneva Motor Show, it is a design study that provides a glimpse into the carmaker’s future. It is also a reinterpretation of the Hyundai Coupe Concept from 1974. Design highlights include a low stance and a massive cascading grille. To know more about the Le Fil Rouge concept, head here.

The Nexo is powered by an electric motor that develops 164PS and 395Nm. It draws power from hydrogen fuel cells, good enough for a potent 163PS and 400Nm and claims a range of 611km (EPA) on a full tank. Yes, one can drive this long-range EV without range anxiety. That said, hydrogen fuel cell technology is relatively new in most parts of the world and could limit Nexo's appeal in India. Here’s more about it.

The first of the two N-branded models showcased was the i30N performance coupe. It is powered by a 2.0-litre T-GDI engine that comes in 254PS/353Nm and 279PS/353Nm. Power is sent to the front wheels via a 6-speed manual. It also features performance-oriented bits like the ‘N Grin’ control system. They alter various parameters such as the engine, dampers, electronic stability control, engine sound, steering, and rev-matching.

The last and most radical N-branded model was the RM19 prototype race car. It is essentially a mid-engined Veloster powered by a 2.0-litre turbocharged four-cylinder petrol mill from the TCR race car. It produces 390PS of power, paired to a 6-speed sequential gearbox to power the rear wheels and propel it from 0-100kmph in less than four seconds. It tops out at speeds in excess of 250kmph. Race-spec tweaks include a large front-splitter, fender extensions, a rear-wing and a diffuser. Air vents replace the rear windows to provide air to the mid-mounted engine. Interior tweaks include bolstered sport seats and a race-spec steering wheel. The RM19 will serve as a platform for future N models with the carmaker aiming for supercar performance levels.

Rounding off the pavilion at Hyundai was the Kona Electric SUV, which essentially kicked off India’s EV revolution in 2019. It is sold at a starting price of Rs 23.72 lakh (ex-showroom India). It boasts an ARAI-claimed efficiency of 452km and its electric motor churns out 136PS and 395Nm.