… at least in their current state, as Aprilia has plans for a more powerful and better equipped RS and Tuono for the Indian market. 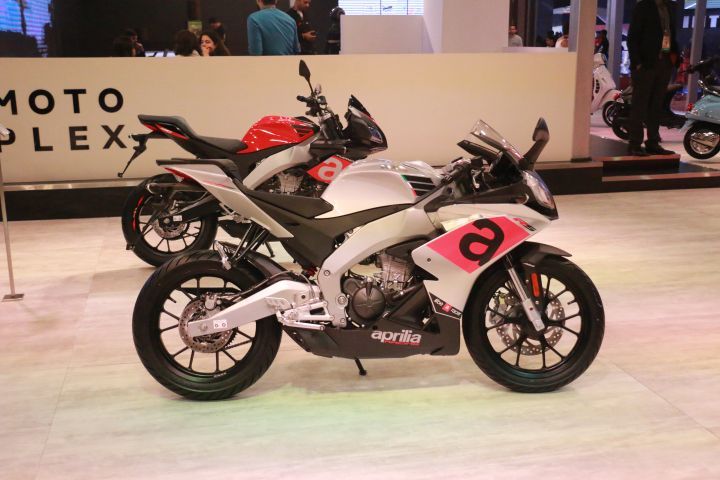 In a conversation with top officials from Aprilia India at the 2019 Aprilia SR 150 launch in Mumbai, we got to know that the much awaited RS 150 and Tuono 150 seen at the 2018 Auto Expo, will not be making it to production in their current state of tune.

From our discussion, we’ve learnt that the company isn’t too happy with the performance they’re getting out of the 150cc motor that was supposed to go into the RS150 and Tuono 150. The power figures revealed at Auto Expo 2018 were 18PS and 14Nm. Seeing that the Yamaha R15 V3.0 is offering more than that, it’s no wonder that Aprilia feels that the two motorcycles might miss out on the performance edge that the bigger Aprilia motorcycles enjoy.

Officials from Aprilia have also stated that the company intends to develop motorcycles that not only outperform their competition but also stand out from the crowd - much in the same way as the Aprilia RSV4 and the Tuono V4 1100, bikes that possess a distinct character in the face of their competition.

In order to do this, the revision can be expected either in the form of increased performance or even a bigger motor, to make it a true blue Aprilia.

Having said that, officials from the company also pointed out that the real challenge is to get the pricing right. Considering the kind of performance, tech and equipment the new RS and Tuono are  supposed to have, they said that prices for the two are likely to be a fair bump up from the current pricing of the Yamaha R15 v3.0 (Rs 1.27 lakh ex-showroom).

Aprilia certainly isn’t new to small capacity motorcycles. They have been making bikes like the RS125 and Tuono 125 for the European market for some time now. But the officials mentioned that India is a very unique market, so the kind of small capacity bikes that work in Europe won’t be a direct fit in the subcontinent. The focus, then, has to be on making products that works for the distinct needs of the Indian market, and hence the company is taking its time to design, develop and manufacture the bikes in the country itself.

Having said that, the officials also pointed out that opting to tie up with a local manufacturer to help with mass production of these motorcycles, though a cost-effective approach, is not the direction the company intends to go into. This, they said, would be better in the long run to keep the Aprilia DNA undiluted.

With this new information about Aprilia’s new approach towards the eagerly awaited baby RS and Tuono motorcycles in India, we can’t wait to find out what the final production models will turn out to be.

Aprilia initially planned to launch the two motorcycles in India by the end of 2019. However, with the recent development, expect the launches to get pushed well beyond that.