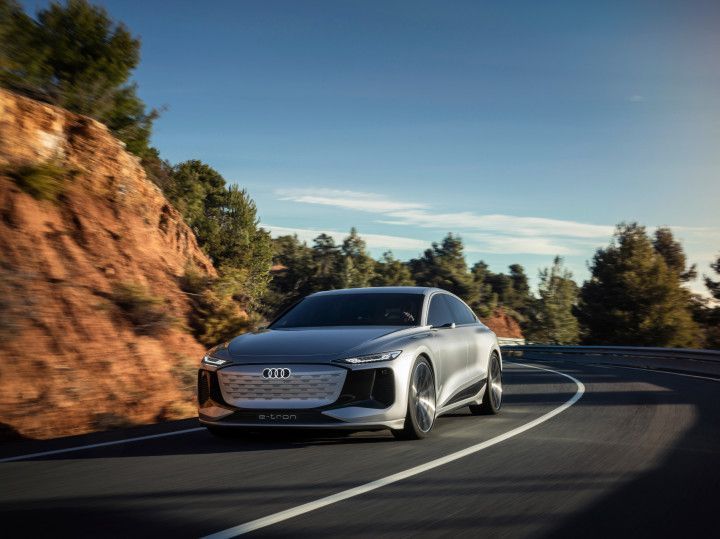 The ongoing 2021 Auto Shanghai has seen some exciting new models break cover. One that caught our eye was the A6  e-tron concept. While Audi  has a knack for making some uber-cool concept cars, few ever get produced. But this time, the carmaker has confirmed the A6 e-tron will go into production and launch by 2022. So, without further ado, here’s all you need to know about the e-tron concept.

The A6 e-tron looks striking at the least. Unlike the existing A6 sedan, the A6 e-tron gets a Sportback-like (Audi’s lingo for ‘coupe’) body. The sloping roofline lends it a sporty look, while the haunches above the wheel arches hark back to the Audi quattro. The large 22-inch alloys also contribute to the sportiness.

There’s a large single-frame front Audi grille (closed off for improved aerodynamics) flanked by sleek Matrix LED headlamps. Audi has been a pathbreaker in automobile illumination and has expectedly taken things up a notch up with the A6 e-tron. One can play quick games projecting the light from the headlamps on to a wall. Also, players can control the game from their mobile devices using an Audi app. How cool is that!

That’s not all. Side LED projectors greet occupants stepping into the car. The projectors at the corners cast turn signals warning pedestrians that you’d be taking a turn. We think that’s all very clever and ‘Vorsprung Durch Technik’ (technology-led, in English). The rear end sports a sleek LED lighting strip running across the width of the tailgate.

The concept’s Helio Silver body shade is not only good to look at but a clever thought from Audi too. That’s because it reduces the amount of heat entering the cabin so that you don’t shave power off the EV every time you put the AC on full blast. Needless to say, it helps its range as well.

Audi has yet to reveal the A6 e-tron’s interior, but it should be similar to that of the e-tron GT and Q4 e-tron. That said, we do expect some typical Audi features, including the virtual cockpit and MMI infotainment system and ambient mood lighting (to up the sense of occasion, especially at night).

The A6 e-tron will be the first Audi to be based on the carmaker’s new PPE platform. No, it isn’t short for personal protective equipment (though that’s the most relevant abbreviation in today’s times). Instead, it’s Premium Platform Electric, Audi’s new platform designed for its future EVs.

While technical specifications are yet to be revealed, Audi claims that even entry-level A6 e-trons can go from 0-100kmph in seven seconds, and therefore, high-performance variants should do the same under four seconds.

A 100kWh battery pack will power the motor. The A6 e-tron can cover over 700km on a full charge and support fast-charging up to 270kW (like the e-tron GT). It can be charged from 5 to 80 percent in less than 25 minutes. Fast charging for 15 minutes can ensure a range of 300km.

The production-spec A6 e-tron will be revealed by the end of 2022. Back home, Audi will kickstart its EV journey with the e-tron and e-tron Sportback SUV later this year.