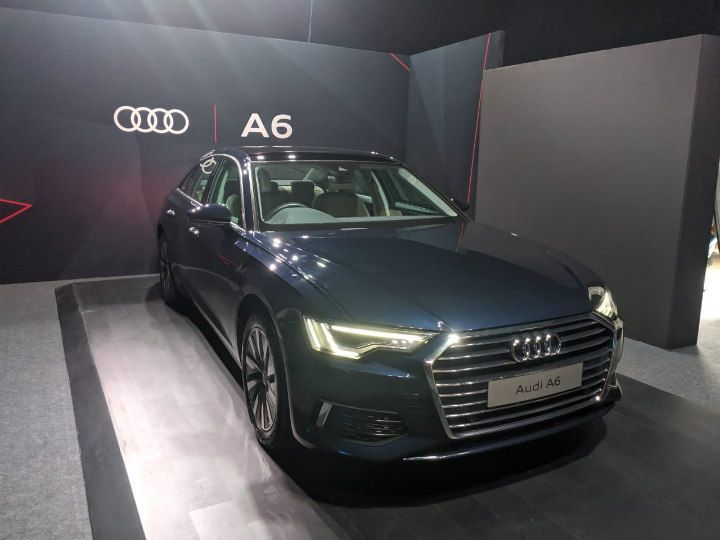 Audi India has finally launched the eighth-gen A6 sedan in the country. Prices for the sedan, which is offered in two variants, start from Rs 54.20 lakh (ex-showroom India). Powered by a BS6-compliant 2.0-litre TFSI powertrain, the new A6 is sharper in looks, louder in personality and completely revamped on the inside. Here’s a closer look at the improved sedan in detailed images.

A glance at the 2019 A6 is enough to tell us that the design is more of an evolution, with the soft curves in its predecessor replaced by sharp creases and lines. The front-end is blinged out by a wide hexagonal chrome slat grille flanked by matrix LED headlamps and high-res dynamic light function, which adapts the A6’s headlight brightness relative to oncoming vehicles.

When it comes to dimensions, the 2019 Audi A6 has certainly had a growth spurt. It is now 7mm longer, 12mm wider and 2mm taller than its predecessor, with its wheelbase being extended by 12mm.

The blinged-out nature of the A6 continues with chrome inserts around the window sill and the profile, which also get a sharp crease for added character. A swanky new set of 18-inch dual-tone alloy wheels round off the side profile.

Going towards the rear, the A6 gets a fresh and sleek set of LED tail lamps connected by a thin chrome strip.

While the new A6’s exterior upgrades may seem like a simple evolution, its interiors get a major revamp.  It is the first Audi in India to come with a twin-touchscreen central console.

The cabin is draped with premium materials like gloss black, wood, aluminium and leather trims. The leather upholstery is offered in brown and beige that gives the cabin a futuristic look.

Aside from comforts and a growth spurt, the new A6 also boasts plenty of boot space at 560 litres for your typical road trips/ vacation travels.

Coming back to the A6’s twin-touchscreen central console, the top screen handles the infotainment system while the lower unit handles climate control duties. The driver also gets his own screen in the form of Audi’s Virtual Cockpit.

The various kit onboard the A6 include connected-car tech, Android Auto and Apple CarPlay, quad-zone climate control, sunroof, wireless phone charger,, ambient lighting, and park assist. Other nifty features include Audi’s drive select, wireless phone charger as well as keyless entry with push-button start. A Bang and Olufsen sound system rounds off the features inside the A6 sedan.

Safety equipment in the 2019 A6 consists of eight airbags, ABS with EBD, front and rear parking sensors, rear parking camera, and ESP. Traction control, electric parking with auto hold and lane departure warning round off the safety kit.

Audi India has decided to offer the 2019 A6 comes with a petrol engine only for now: a 2.0-litre TFSI unit producing 245PS of power and 370Nm of torque.

The engine is mated to a 7-speed DCT gearbox with a front wheel drivetrain. It hits 0-100kmph in 6.8 seconds with a capped top speed of 250kmph. The A6 also comes with Audi's mild-hybrid technology. It is likely that the tried and tested 2.0-litre TDI engine could join the lineup later as this segment is dominated by diesels.

With a price tag of Rs 59.20 lakh for the top-spec ‘Technology’ variant, the 2019 Audi A6 comes at a premium of Rs 9.19 lakh over its predecessor. It is offered in five colour options: Ibis White, Mythos Black, Vesuvlus Grey, Seville Red and Firmament Blue. Primary rivals for the A6 include the Mercedes-Benz E Class, BMW 5 Series and the Volvo S90. Stay tuned for a detailed first drive review and a comparison report of the 2020 A6.