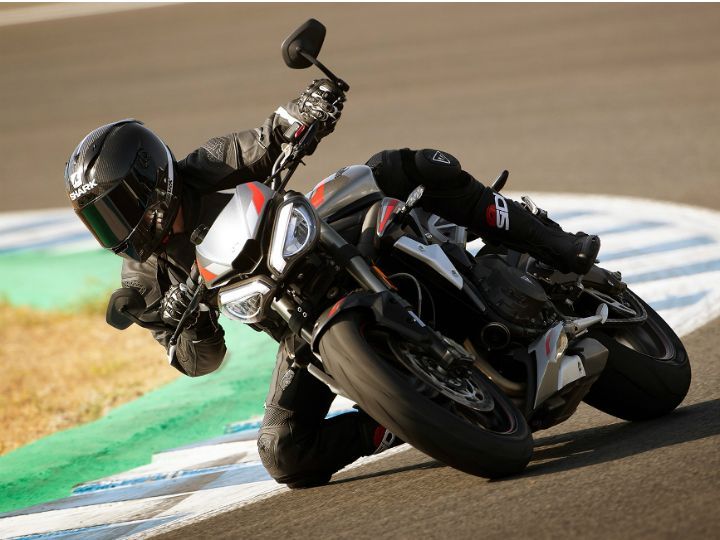 Since the discontinuation of the 675 Daytona, the Street Triple RS has been the meanest, baddest, quickest motorcycle in Triumph’s lineup. The bug-eyed beauty has been updated for 2020, so let’s take a look at what’s new on the Trumpet.

The Heart Of The Matter

One of the biggest updates on the new RS is the engine. Triumph’s Moto2 experience has obviously paid dividends because despite now being Euro5/BS6-compliant, the motor hasn’t lost any ponies. In fact, torque has gone up by 2Nm while also being delivered 1450rpm earlier than before. Triumph also claims 9 per cent more mid-range power and torque. The first two gear ratios have also been shortened to give the Triple quicker acceleration off the line.

What’s even more remarkable is that the Street Triple hasn’t put on any weight over its predecessor, still tipping the scales at just 166kg dry. This has been achieved via a redesigned exhaust cam and higher precision machining on the crankshaft, balancer and clutch. The layout of the exhaust system is also more free-flowing than before, which is exceptional since emission norm updates usually result in a more constricted exhaust system.

There isn’t a whole lot in terms of bodywork on the Street Triple RS, but most of what there is has been reworked on this updated model. The side panels, seat cowl, belly pan and flyscreen have all been redesigned on the new bike, resulting in a more conventional, less polarising appearance.

And now for the most noticeable change - the signature bug-eyed headlights have made way for twin-LED headlights with LED DRL strips above that mimic frowning brows and give the Triple a mean face. The new carbon fibre insert at the exhaust exit is also a neat touch, and at the other end of things, the air intake has been redesigned as well.

The electronics package on the RS has been upgraded too, with the bike now featuring a bi-directional quickshifter as opposed to the previous version’s upshift-only system. The five rider modes have also been tweaked to match the engine’s new characteristics, while the colour TFT display has now been given Bluetooth capabilities which can be explored using a Bluetooth module sold as a separate accessory. This will allow users to manage telephone functions as well as control their GoPro cameras.

The older model has rather slim handlebars, at just 735mm wide. The updated bike has handlebars that are 40mm wider, at 775mm, and this should give riders more leverage when flicking the motorcycle from side-to-side. Also new are the even grippier Pirelli Diablo Supercorsa SP v3 tyres. The rest remains unchanged, meaning an aluminium twin-spar frame and a two-piece cast aluminium sub-frame as well as a gull-wing type swingarm.

The cycle parts on the Street Triple remain the same, meaning a fully-adjustable 41mm Showa Big Piston front fork backed up by a fully-adjustable rear shock from Ohlins. Braking duties are taken care of by the excellent Brembo M50 monobloc calipers biting on twin-310mm discs up front. The 17-inch alloy wheels are wrapped in 120/70-ZR17 rubber up front and 180/55-ZR17 at the rear.