The iconic bikemaker is all set to show off an eclectic range of bikes this time! 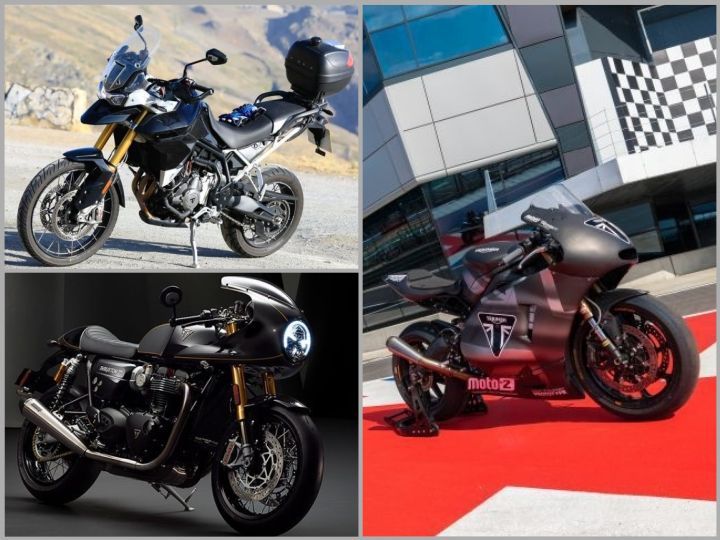 It has been an eventful year for Triumph Motorcycles. From the incredibly powerful Rocket 3 to the mental Daytona 765 Moto2 Limited Edition, Triumph has managed to keep all sorts of enthusiasts entertained throughout the year. Then we witnessed the achingly beautiful retro-modern Thruxton TFC edition followed in short order by the shockingly fast 2020 Street Triple RS.  Even though there are only two months left in this year, Triumph wants to end it on a high note, with a host of bikes planned for EICMA next week. Here’s what to expect from the British bikemaker:

The last major update that the Tiger 800 range received was at the 2017 EICMA. Now, with the Euro 5 emission norms looming, it’s high time Triumph updated its venerable middleweight ADV. And yes, Triumph is already prepared, ‘cause the 2020 Tiger 800 XC was spotted testing back in August this year.

The upcoming ADV will feature sleeker bodywork with slim LED headlights. It is also likely to get revised underpinnings and a new frame!

In our opinion, the Triumph Bonneville Bobber is one of the best-looking motorcycles out there. And now Triumph is all set to add brawns to the already beautiful bike with the upcoming TFC Edition, which is likely to be unveiled at the 2019 EICMA. For the uninitiated, TFC stands for Triumph Factory Custom. Interestingly, the bike was spotted testing in July this year.

The Bobber already offers reasonably decent braking prowess but Triumph has dialled it up further by equipping the bike with dual front discs with Brembo M50 radial calipers. What’s more, it even gets more sophisticated inverted fork instead of the traditional unit, which not only looks better, but will also aid in the bike’s handling. To top it all off, the bike also gets lowered handlebars for more aggressive ergonomics.

While Triumph has already unveiled the Thruxton TFC edition, the British brand could take the wraps off the RS version at this year’s EICMA. This will be a proper production bike as opposed to being available in limited numbers like the TFC edition. What’s more, Triumph already released a teaser of the bike. It is likely to slot in between the sportier R variant and the exclusive TFC model.

Consequently, expect the upcoming bike to feature more premium underpinnings than the R variant. For reference, the Thruxton 1200 R gets Showa USD big piston fork and fully-adjustable Ohlins twin gas-charged shock absorbers. Brakes include twin 310mm discs with Brembo radial monobloc calipers and a 220mm Nissin caliper at the rear. Like the TFC version, this bike too could feature lighter engine internals. This should result in more power output than the R variant.

The new Triumph Daytona Moto2 bike is already out, and Triumph is likely to showcase it at this year’s EICMA show. Interestingly, Triumph unveiled the Daytona 765 Moto2 Limited Edition, which as its name indicates is a limited-run road-legal model of the track bike, in August. Unfortunately, a standard production model of this bike is unlikely to appear at this EICMA. That’s because the brand plans to concentrate its resources more on the Euro 4 to Euro 5 transition. Because of this, the motorcycle is likely to hit the roads only in 2021.

With new emission norms on the anvil, we can expect Triumph to unveil the Euro 5-compliant versions of the entire Bonneville range at the event. However, the Triumph Street Cup has been given a miss in the recent CARB filings, hinting at the possibility that the bike could be discontinued. It does make sense for the brand as the cafe racer itself is a niche genre and with the Thruxton 1200 RS on the horizon, Triumph would rather go all out with that motorcycle rather than offer a small-capacity cafe racer.