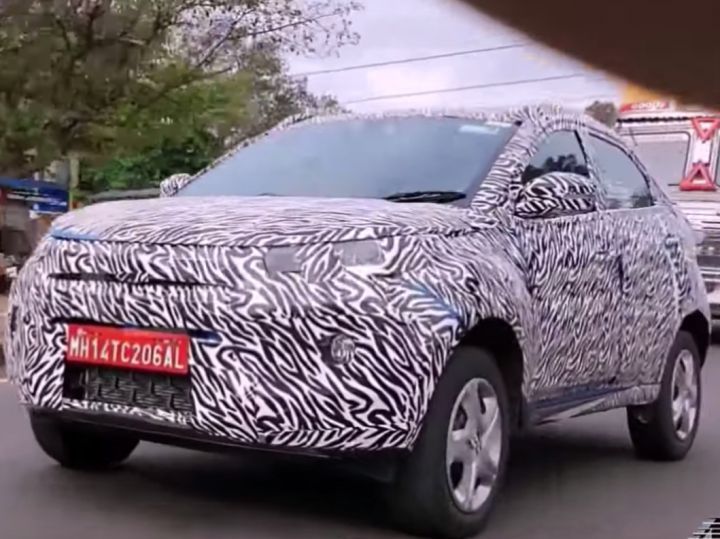 Tata Motors has started road testing the facelifted 2020 Nexon compact SUV, which is scheduled to debut at the upcoming 2020 Auto Expo. The new Nexon gets a Harrier-like face, a premium instrument console and additional features to make it more relevant in the face of its primary rivals, the Hyundai Venue, Maruti Suzuki Vitara Brezza and Mahindra XUV300. It is expected to come with BS6-compliant engines while its electric (EV) variant will debut the carmaker’s Ziptron powertrain. Now, a video of its mid-spec variant has surfaced on YouTube. Is it too pared down when compared to the top-spec variant? Let’s find out.

Major changes for the mid-spec facelifted Nexon are at the side and rear. The dual-tone alloy wheels have been replaced by steel wheels with plastic wheel caps that look identical to the Harrier’s XE variant. Changes to the rear include restyled tail lamps with better detailing. At the front, both variants get an upright nose with a Harrier-like grille and sleek projector headlamps.

Inside, the Nexon facelift could get a few crucial updates to keep things fresh. This includes a new instrument cluster a la the Harrier and the sleek steering wheel from the upcoming Tata Altroz. Reports also suggest that the lower-spec variant could get the new digital console from the Tata Tiago and Tigor.

The Nexon facelift is expected to retain its 1.2-litre petrol and 1.5-litre diesel engines with upgrades to meet BS6 emission norms. Currently, the petrol engine develops 110PS and 170Nm while the diesel engine churns out 110PS and 260Nm. Both variants can be had with a 6-speed manual and AMT. The facelifted Nexon will also come with the EV variant that will debut the carmaker’s Ziptron powertrain. While technical specifications are yet to be revealed, the Nexon EV is expected to come with a 300km range.

The facelifted Tata Nexon is expected to debut at the Auto Expo 2020. Considering the styling and mechanical upgrades, the Nexon is expected to cost more than the current model, which starts from Rs 6.58 lakh. Meanwhile, the Nexon EV is expected to be priced from Rs 15 lakh to Rs 17 lakh (both ex-showroom). The Nexon facelift will rekindle its rivalry with the Hyundai Venue, Ford EcoSport, Mahindra XUV300 and Maruti Vitara Brezza.