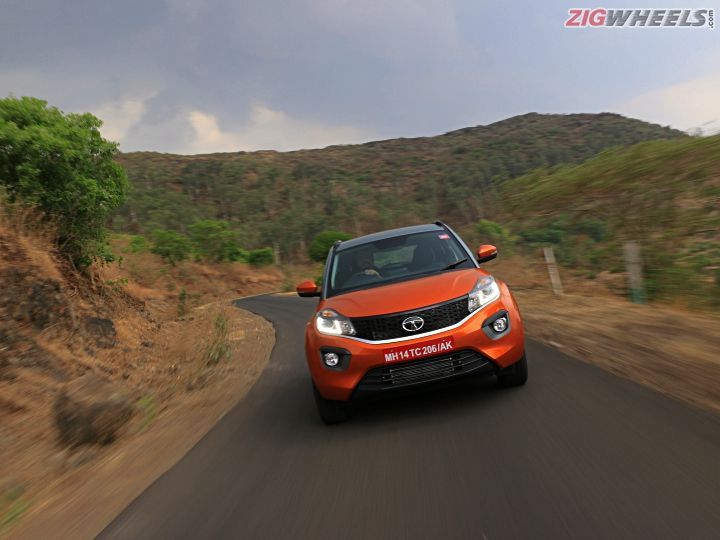 Indeed, this is the first compact SUV to be offered with an automatic transmission in both, petrol and diesel guises. To begin with, there aren’t any significant mechanical changes save for the addition of the Magnetti Marelli-sourced AMT unit. Be it the 1.2-litre Revotron engine (110PS/170Nm) in the Tata Nexon petrol AMT or the 1.5-litre Revotorq motor (110PS/260Nm) in the Tata Nexon diesel AMT, both engines produce the same amount of power and torque. Even the gear ratios of the 6-speed transmissions are identical to the Nexon manual.

Of course, there has been a slight tweak to the throttle map to match the transmission’s behaviour and yes, the Nexon AMT does come with the all-important creep function. The gearbox also comes with a tiptronic manual mode to let the driver take control when needed.

Interestingly, Tata has included hill-assist but it’s essentially an extension of the creep function i.e. there’s no mechanical engagement of the brakes to prevent it from rolling back. Tata also says it has anti-stall which is a bit obvious, no?

How Do You Identify One?

Simple, just suffix the letter A at the end of the variant. At launch the, Nexon AMT will only be available in the fully-loaded XZ+ variant, hence the XZA+ badge on the car you see in these images. That said, Tata will introduce the AMT on lower variants if customers demand it.

Oh yes, your eyes don’t fool you. The Etna Orange paint shade is a brand new introduction and is the marketing colour of the Nexon AMT. Don’t worry, a shade this tasty won’t be limited to the Nexon automatic alone.

How Does The Petrol Drive?

We’d be remiss if we didn’t express some concerns before buckling up in the Nexon petrol AMT. The engine in the Nexon petrol offers a decent mid-range and is usable on the highway as well, but as a commuter, it does have some drawbacks. The spikey power delivery and the ever-present need to work the gearbox make it a less desirable daily drive.

But, things have improved with the AMT. The throttle response feels smoother, you don’t have to wait for the turbo to kick in for the oomph to be usable, head nod during gear changes although noticeable, isn’t annoying (so long as you modulate the throttle right) and it doesn’t hold on to higher revs unnecessarily.

Yes, even the AMT comes with drive modes. At low speeds, you can use the Eco mode which dulls throttle response down, but it isn’t dead. There is an ample torque reserve to amble about in the city calmly. As the pace picks up or you have passengers on board, switch to the City mode to draw more power, quicker. It’s also the mode to be in if you need constant urban speed overtakes. If you’re looking to have some fun, roll the dial to Sport mode. Here, the Nexon petrol feels just right. Throttle response gets sharper, but still isn’t jerky, the gearbox is more willing to stick with higher revs and consequently, if you’re driving on inclines or need to make high speed overtakes, you pretty much need to stay in this mode. Speaking of which, the Nexon petrol is a decent highway tourer. In fact, at 80-100kmph, it’s sitting at 1500-2000rpm - exactly the same as the diesel.

Problems? Well, there is some typical 3-cylinder judder at crawl speeds. For example, if you’re throttling out after a particularly menacing speed breaker, there will be some hesitation from the engine to build up the revs, albeit it’s for a second, at most. Also, while head nod is managed well, it’s good by AMT standards. Don’t expect an experience as polished as the one you’d get in the new EcoSport petrol AT. Also, the manual tiptronic mode is set up on the conservative side, so if you try to push past the redline line (or red needle in this case), it will upshift automatically. Not a car for the enthusiast, but that’s hardly unexpected.

Long story short, the diesel just works. Period! It makes up for the gaps we found in the petrol. So there’s no judder at crawl speeds, for starters. In fact, it’s an even more relaxed drive in the city since there’s less throttle input needed and highway overtakes just don’t need any planning.

Most importantly, unless you go the whole hog on the happy pedal, head nod is negligible. The added dollop of torque makes up for what little laziness the transmission has, making shifts much smoother. It’s also good fun to drive in manual mode. Characteristic of diesels, you don’t need to tease the limiter to get to the creamy bit of the performance band. Even with a full passenger load, we had a ball getting the Nexon diesel AMT through the ghats of Mahabaleshwar.

There is one issue common to both engine options, though. Remember what we said about hill-start assist? Well, because you’re relying on how much torque there is at idle and not on the auto engagement of brakes (like in a traditional HSA setup), if an incline is sharp enough, you will roll back. Yes, the engine will eventually catch the slip back but it rolls enough to knock into any car behind you. Don’t hesitate to use the handbrake when required.

We’ll put it this way. Tata’s definitely taken its time to tune the Nexon AMTs just right. In the diesel, it just adds that significant bit of convenience that comes with an automatic transmission. In the petrol, the marriage of engine and gearbox has improved when compared to the manual, and convenience aside, it’s a better commuter. Launched at Rs 9.41 lakh for the petrol XZA+ and Rs 10.39 lakh for the diesel XZA+, the Nexon AMT definitely comes at a heavier premium (~Rs 60,000 for the petrol and ~Rs 70,000 for the diesel) than we expected. But the added touch of convenience might just be worth it in the long run.