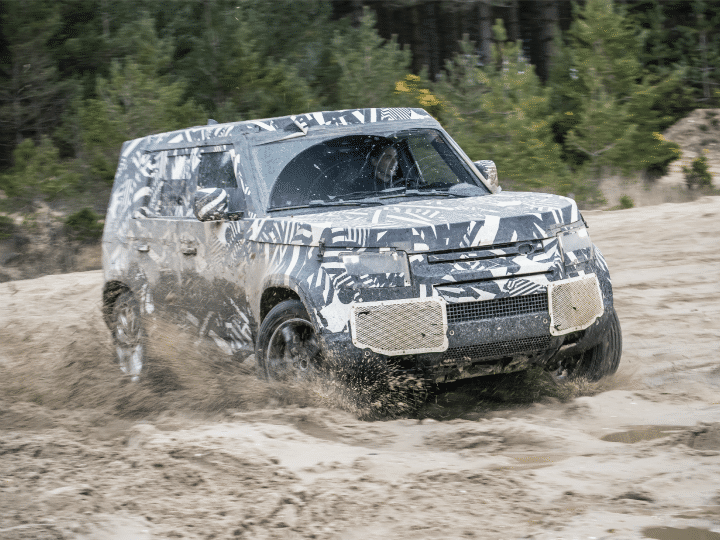 The Land Rover Defender is getting ready for a comeback after a gap of nearly three years. Many teasers and spy shots have surfaced of the hardcore off-roader being put through its paces all around the world including, strangely, at the Nurburgring racetrack! While Land Rover may have kept the design and the technical specifications under wraps till now, images leaked by a Land Rover blog have given us a detailed idea of what to expect from the upcoming SUV.

To start off, the new Defender will be offered in three body styles. The first one to be launched will be the Defender 110 in October 2019. This will sit in the middle of Defender lineup. It will be a five-door model that will stretch up to 4758mm long, 1916mm tall, 1999mm wide, and ride on a 3022mm wheelbase. The 110 will also be offered in six- and seven-seat options.

The second variant will be the Defender 90, which will be launched in March 2020. This will be the shortest of the lot with an overall length of just 4323mm and a 2587mm wheelbase. Despite its shortened dimensions, the 90 will get a five- or six-seater option.

The third and largest of them all will be the Defender 130. It is expected to be launched around August 2020. It has the same 3022mm wheelbase as the 110, but it is longer overall at 5100mm to accommodate up to 8 seats.

The plug-in hybrid powertrain is also available, but details about it are not complete yet. What we do know is it consists of a 3.0-litre, inline 6-cylinder petrol motor paired to an unspecified electric motor(s) and battery pack with a combined output of 424PS/645Nm. All variants of the Defender will be offered with all-wheel-drive and an automatic transmission as standard.

The Defender will be offered in five variants: Standard, S, SE, HSE and X-Dynamic. The lower-spec variants will get 18-inch alloy wheels, LED headlights, fabric seats, eight-way electrically adjustable front seats and a 140W six-speaker sound system. Other features include a 10.0-inch touchscreen infotainment system and a 7.0-inch multifunction display.

While there is no word yet on when the new Defender will make it onto Indian shores, we can expect some updates after it is launched internationally in September 2019. Once launched, it will rival the likes of the India-bound Jeep Wrangler Rubicon.