Land Rover Defender Revealed Inside Out In Spy Shots! 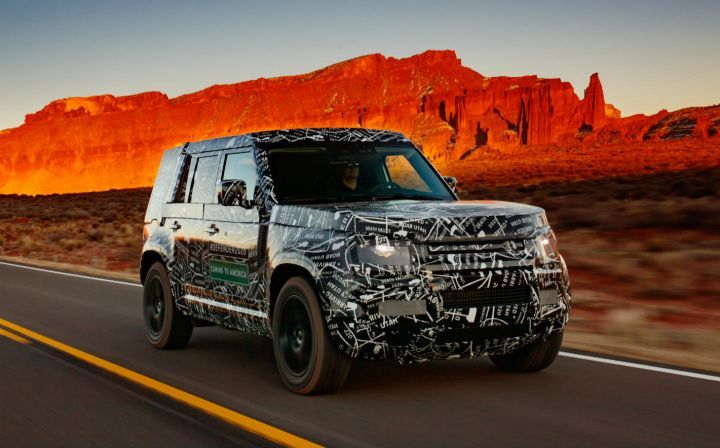 The Land Rover Defender is set to make a comeback after a gap of nearly three years. The all-new version of the hardcore off-roader has been teased plenty of times before. However, it’s interiors were under wraps so far. Thankfully, a new set of spy images reveal exactly that. So let’s take a look at what it has to offer.

The Defender gets a functional yet futuristic looking dashboard. All of its controls are set high to ensure the cabin is ergonomic. Like other Land Rover models, the Defender’s controls are big and chunky so that one can use them even while wearing gloves. The Defender also gets a new four spoke steering wheel that features electric rake and reach adjustment.

On the outside, the Defender features an upright and boxy silhouette just like its predecessor. Land Rover is likely to offer three- and five-door options like before. At the front, there’s a sleek grille flanked by square headlamps. The chunky wheel arches give the new Defender an upright stance. At the back, the tailgate-mounted spare wheel and sleek LED taillamps round off the design.

Under its skin, the new Defender is likely to be underpinned by the Discovery Sport’s D7u platform. Reports suggest that the Defender will be offered with a 2.0-litre turbocharged petrol motor at launch. Expect hybrid and diesel versions to follow later on. Being a hardcore off-roader, it is expected to get an all-wheel drive powertrain, a low range gearbox, hill descent control as well as locking differentials. The interior spy shots also confirm that it will get Land Rover’s famed Terrain Response system.

The Land Rover Defender is expected to debut in September with global sales set to begin in the first half of 2020. When launched, it will take on the likes of the Jeep Wrangler Rubicon that’s slated to be launched here in India later this year.