Triumph pull the wraps off the Bonneville Speedmaster at the 2017 India Bike Week, Goa. 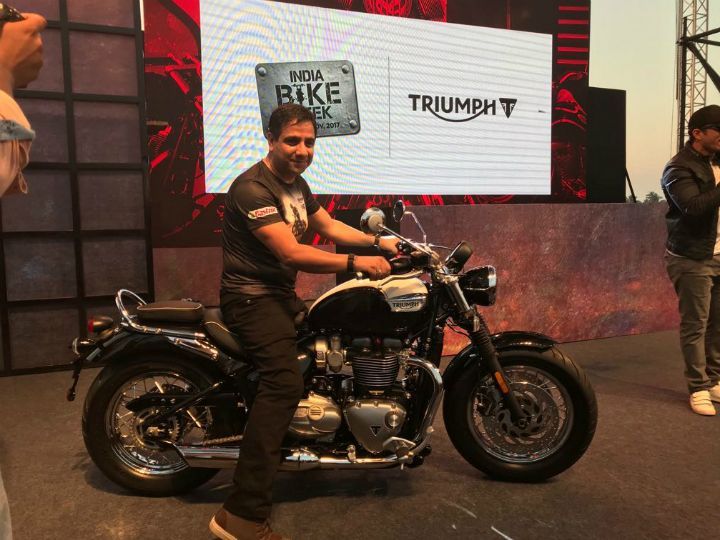 Triumph has officially launched the Bonneville Speedmaster at the 2017 India Bike Week in Goa. The cruiser was first unveiled at Triumph's headquarters in Hinckley, UK, last month.

Being a cruiser motorcycle, the Speedmaster gets swept-back handlebars and forward-set footpegs for a comfortable riding posture. Triumph has employed a longer split-saddle for you and your pillion to crunch miles comfortably on the Speedmaster. At the front, the motorcycle features LED headlights which comes with DRLs. You’ll also notice a single analogue pod with a digital display.

At its heart, the Speedmaster gets the same engine that is seen on the Bobber. This 1200cc liquid-cooled parallel twin unit makes 77PS of power at 6100rpm and 106Nm of torque at 4000rpm. The transmission duties here are handled by a 6-speed gearbox. The Speedmaster gets its fair share of features such as ride-by-wire technology, two riding modes - Road and Rain, switchable traction control and cruise control.

In terms of suspension, the Speedmaster employs 41mm telescopic forks at the front with 90mm travel and an adjustable monoshock unit at the rear with 73mm rear wheel travel. Braking duties are handled by Brembo twin-piston 310mm discs at the front and a Nissin single-piston 255mm disc at the rear. ABS comes as standard here. The Speedmaster gets 16-inch spoke wheels instead of the 19-inch one seen on the Bobber. As this is a tourer the Speedmaster gets a 12-litre fuel tank instead of the 9-litre one seen on the Bobber. It is certainly not the lightest of the tourers at 245.5kg.

Along with the standard version, Triumph offers the bike in two custom kits - Maverick and Highway. If you opt for the Maverick kit, you'll get flatter handlebars, a single seat and Vance & Hines exhaust pipes, which are finished in black. Along with it, smaller elements covered in chrome on the standard model have been blacked out here.

The Highway kit, on the other hand, features a largely adjustable windscreen, split seats with a backrest and a small luggage carrier at the rear. In addition to this, you also get panniers on either side. The chrome bits of the standard variant have been carried over here as well.

It is expected that the bike will be officially launched for the Indian market in the first quarter of  2018. If you want to know how it’ll perform on our roads, stay tuned for our in-depth report on Triumph's new offering.