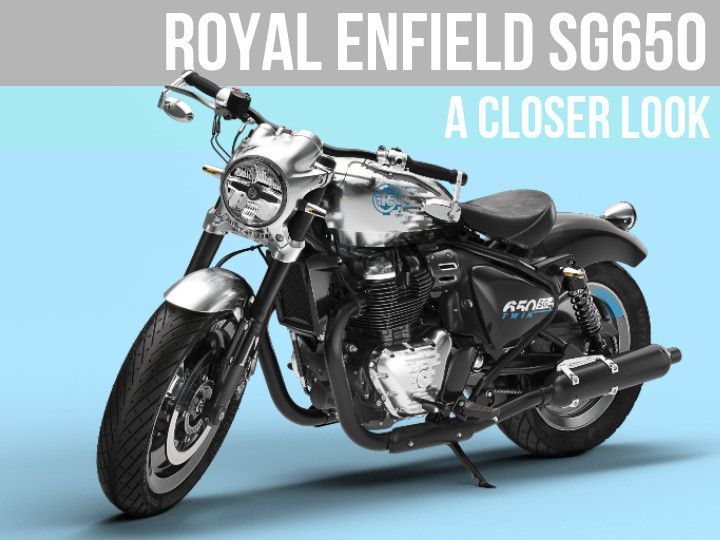 Royal Enfield has finally done what everyone’s been wanting: plonked its 650cc motor into a cruiser motorcycle. And what we have as a result is the SG650 concept bike. Here’s a closer look at it:

The SG650 concept looks like it came straight out of a custom bobber-build competition. True to the bobber ethos, it comes with chopped-off front and rear fenders and a silver-black paint scheme.

Up front, you get a herculean headlight mask finished in silver. And for the first time on a Royal Enfield, there’s an LED headlight flanked by sleek LED indicators. Yay!

Being a bobber, the SG650 gets a single seat coupled to mid-set footpegs and a low, flat handlebar with stylish bar-end mirrors.

At the rear, there are two blacked-out pea-shooter exhausts and a circular LED taillight. The rear indicators are mounted on the rear shocks, which is quite unique.

And rounding this are beefy alloy wheels (Harley-Davidson Fat Boy, is that you?) wrapped in wide Metzeler tyres, which also house the twin disc brakes at the front and a single disc at the rear.

As mentioned above, the SG650 concept is powered by the Royal Enfield Interceptor 650-borrowed 648cc twin-cylinder engine. It has been blacked out here, adding that modern touch. The engine casing gets a pixel-like texture, similar to the fuel tank.

The engine seems to be housed in the same frame as the Interceptor, but the rear portion of the frame has been thoroughly tweaked to go with the single-seater setup.

The bike is sprung on a USD fork and twin shock absorbers, the latter being a first for RE.

With so many ‘firsts’, the SG650 is undoubtedly a one-of-a-kind motorcycle. And considering this concept will act as the base for the upcoming Shotgun 650, and to an extent, the Super Meteor 650, we can’t wait to see what’s coming our way in the future!