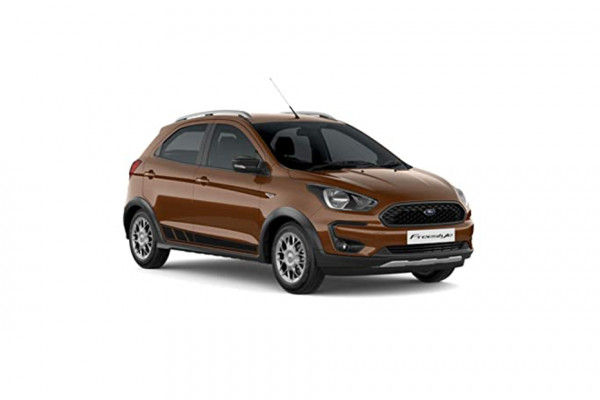 Ford debuted a new 1.2-litre, 3-cylinder petrol engine with the Freestyle. The engine comes from Ford’s new Dragon family of motors and develops a class-leading 96PS of power and 120Nm of torque. Paired to a new Getrag-sourced 5-speed manual gearbox, it’s quite a hoot to drive. In our tests, it clocked 100kmph in just a smidge over 13 seconds, and returned 13.5kmpl inside the city and 19.19kmpl on the highway. A good balance? We’d say so! The diesel engine on offer is the tried-and-tested 1.5-litre TDCi motor that pumps out 100PS of power and 215Nm. We’re yet to put it through a road test, but that engine has always been fun to drive. The only chink in the armour right now, is the fact that the Freestyle does not have an automatic variant on offer.

The Freestyle is available in a total of four variants viz. Ambiente, Trend, Titanium and Titanium+. Features such as dual airbags, parking sensors and ABS are standard across the range. That said, feel-good features such as a touchscreen, all four power windows, and steering-mounted audio controls are available from the Trend variant onwards. We’d recommend you pick between the Titanium or the Titanium+ as they offer the most bang for buck.

There’s no denying the fact that the Freestyle is, in fact, a hopped up Figo. Ford calls it a “CUV” but you and I know it’s nothing more than a cross-hatch. That said, it does look quite appealing. The SUV elements are not overdone, and the Freestyle does have an outdoorsy vibe to it. Additions over the Figo include a raised 190mm ground clearance, reworked bumpers at either end, new 15-inch alloy wheels wrapped in 185-section rubber, a new grille and a pair of functional roof rails. We’d have loved to see a set of projector headlamps or maybe some LED daytime running lamps here, but that’s missing on the Freestyle.

Step inside the Freestyle, and you will find yourself sitting slightly higher. The cabin is identical to that of the Figo, save for the brown-black interior combo. Also new is the 6.5-inch touchscreen infotainment system that features Android Auto and Apple CarPlay (but only in the top-spec Titanium+ model). Smaller additions include auto headlamps and rain-sensing wipers. Goodies such as automatic climate control, steering-mounted audio controls, electrically powered and folding ORVMs have been carried over from the Figo. In terms of space, it’s no different, which means it’s still strictly average. In terms of safety, Ford has thrown everything including the kitchen sink at the Freestyle. In the top-spec Titanium+ trim, you’re treated to six airbags, anti-lock brakes, traction control, electronic stability control and active roll over protection.

Maruti Suzuki Ignis: If you wanted the sensibility and no nonsense nature of a Suzuki hatch mixed with a generous dollop of funk, the Ignis is the right fit for you. The fact that it’s practical and fun is just an added bonus.

Mahindra KUV100 NXT : In its NXT avatar, the KUV100 wants to be a wee bit more polished than before. The basics haven’t really changed that much, and the only real USP of the car is the space it offers.

Q. Does the new 2020 freestyle comes with android auto/apple car play?
Q. Internal features in Ford Freestyle Ambiente Model?
Q. I am confused between i20 Elite, Ford Freestyle and Honda Jazz 2018. Considering top end models in petrol variant for respective brands. Which car I should go for?
Q. Which variant of petrol Freestyle to buy? View All Answers
Q. Which of the Tata Tiago XZ and Ford Freestyle better in terms of price, features and safety?
Q. What is the Ford Freestyle Csd Price?
View More Questions
Q. What is the difference between Hyundai Venue and Ford Freestyle?
Q. I am confused, which car to buy between Ford Freestyle Titanium and Tata Nexon XM View All Answers
Q. Compare active vs. safety characteristics of Nexon, Altroz, Freestyle. Which one is best in security aspects Budget less than 10 lakhs?
Q. I am getting a new car by Feb 2020, I like the looks of Freestyle, Nexon ànd Jazz. I am leaning towards Freestyle but when I went to the dealership they recommend Figo Blu or EcoSport. Is there something wrong with Freestyle? What are its limitations? kindly suggest
Q. Why people normally refuse to buy ford car? what is special in ford freestyle which proves this trend wrong ? View All Answers
Q. Is it worth buying Freestyle? If it is, for short distance coverage daily is it worth buying diesel car? If petrol car is suggested then choosing among Titanium, Ambiente and Trend is a problem? View All Answers
View More Questions
All Freestyle Questions and Answers

What is the price of Ford Freestyle Top Variant?

The ex-showroom price of top variant of Ford Freestyle is 8.49 Lakh (Delhi).

What is the mileage of Ford Freestyle?

What is the EMI of Ford Freestyle in Delhi?

What are the top competitors of Ford Freestyle?

What is the boot space in Ford Freestyle?

The boot space in Ford Freestyle is 257 L. View full specification of Freestyle