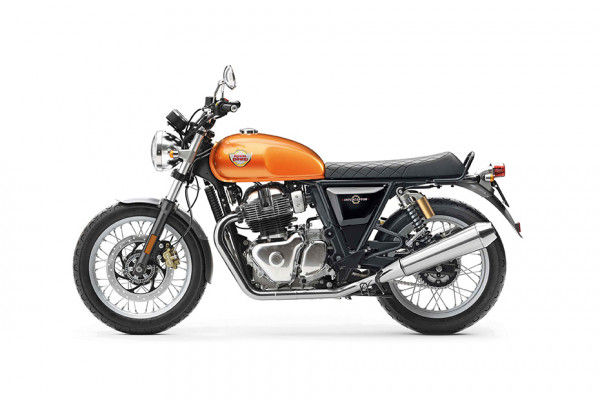 The Royal Enfield Interceptor 650 BS6 comes in six colours. While the Orange Crush, Silver Spectre and Mark 3 are priced at Rs 2,64,919; the Ravishing Red and Baker Express cost Rs 2,72,806. The most expensive variant is the chromed out Glitter and Dust that retail for Rs 2,85,951.

The Interceptor 650 BS6 gets a simple yet eye-catching retro design. The BS6 and BS4 Interceptor 650’s look identical and Royal Enfield have even managed to neatly hide the catalytic converter underneath the motor. In fact, the only way to tell them apart is a BS6 stamp on the BS6 motorcycle’s engine cooling fin. It continues to be available in six colours: Orange Crush, Silver Spectre, Mark 3, Ravishing Red, Baker Express and Glitter and Dust.

The Royal Enfield Interceptor 650 BS6 gets basic features like a halogen headlamp setup, bulb tail lamp and bulb turn indicators. It gets a twin-pod analogue instrument console with a digital inset. The console includes the speedometer, tachometer, with a digital fuel gauge and odometer.

The Royal Enfield Interceptor 650 BS6 has no direct competitors except for its sibling, the Royal Enfield Continental GT 650 BS6. Price-wise, it competes with the Honda CB300R and KTM 390 Duke BS6.