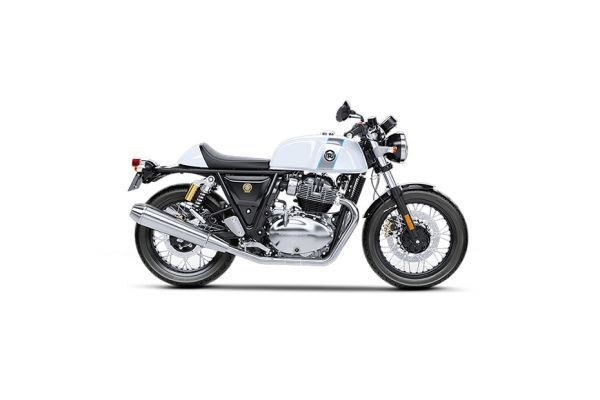 The Continental GT 650 BS6 has arrived at Royal Enfield dealerships and a launch is expected soon, by the end of this month. Prices will be hiked, and the updated BS6 prices have already appeared on the manufacturer's website. To know how much the increase is, head here. There are no cosmetic or mechanical changes to the bike apart from the additional catalytic converters and updated ECU maps required to meet the stricter emission norms.

The 2020 Continental GT 650 has been spotted for the first time. The updated model will remain almost identical to the current model and the only change that it will receive will be in the form of a BS6-compliant engine. The test mule was also sporting a rear seat cowl, which we expect could be offered as an accessory in the future.

The Continental GT 650 draws power from a 648cc, air and oil-cooled, parallel-twin motor that makes peak power of 47.6PS at 7100rpm and 52Nm of torque at 5200rpm. A 6-speed transmission assisted by a slip-and-assist clutch transfers power to the rear wheel via chain drive. The chassis is an all-new dual cradle fame that has been developed by Harris Performance. Suspension duties are handled by 41mm telescopic forks at the front and twin gas charged shock absorbers at the rear with preload adjustability. Anchoring the bike is a single 320mm disc mated to a ByBre four-piston calliper up front and a single 240mm disc brake at the rear. Dual-channel ABS comes right off the shelf.

The much-anticipated Royal Enfield Continental GT 650 has been launched in India for a price of Rs 2.6 lakh (ex-showroom, Delhi). Coming to the design, the Continental GT, in proper Cafe Racer fashion, gets clip-on handlebars that are slightly taller than before, single seat with a race cowl and blacked-out spoke wheels. The fuel tank on the Continental GT 650 is smaller (12.5litre) than its predecessor, the Continental GT 535 which had a 13.7litre tank. Going by the retro theme, the bike gets a twin-pod analogue speedometer which houses a small digital display with readouts such as the odometer and two trip meters. Simplicity carries over to the headlight, taillight and turn indicators as well where it uses conventional bulbs instead of LEDs. The bike will be offered in an assortment of five colours - metallic black, metallic blue, chrome, black and grey and metallic white.

Kawasaki Z650 :
While the Kawasaki Z650 features modern styling compared to its competition, it falls short in the mid-displacement category. The bike features cleaner and sharper lines compared to its predecessor and looks a lot sportier. Its compact overall dimensions and linear power delivery make the bike more accessible for amateur riders. The Z650 is a perfect setup for riders looking to upgrade from a quarter-litre.

Harley-Davidson Street Rod
The Street Rod, inspired from cafe racers and Harley's dirt trackers, essentially is a sportier version of the Street 750. It also offers better performance and handles way better than its siblings. Harley Davidson has also improved the quality and fit-finish. Overall, the Street Rod is a sensible cruiser that can take on the twisties on weekends if need be.

The Continental GT 650 is the perfect upgrade for a Royal Enfield enthusiast who’s keen on buying a retro-modern sporty motorcycle. However, its slightly aggressive riding position may not be comfortable for long rides. Once launched, this cafe racer will be the most affordable 650cc parallel-twin in the country, followed by the Interceptor 650.

RE’s new twin-cylinder platform works really well in its Interceptor guise. But what about when you convert it into a cafe racer?