Ask your question from 125 Duke owners and experts
Your Question should contain at least 5 characters Submit Cancel
Available EMI Options
Rs. 4,683 per month @ 9.45% Apply for Loan

The 2022 KTM 125 Duke has been spotted testing overseas. From the looks of it, it gets a new subframe, a redesigned swingarm and a new support brace for the engine. Full story available here.

The KTM 125 Duke BS6 employs a BS6-compliant fuel-injected liquid-cooled engine, which generates 14.95PS at 9,250rpm and 12Nm at 8000rpm. Interestingly, there is no drop in power or torque compared to the BS4-compliant version. The engine is mated to a 6-speed transmission. Since it’s a KTM for budget-conscious enthusiasts, the motorcycle lacks a slipper clutch. The KTM 125 Duke BS6 is built on a trellis frame. It continues with the same 43mm WP inverted front fork and WP rear monoshock as the BS4-compliant model. Braking duty is handled by a 300mm front disc with radial caliper and single-channel ABS up front, and a 230mm rear disc.

Design-wise, the KTM 125 Duke BS6 looks pretty similar to the BS6-compliant KTM 200 Duke. It gets the same sharp, mass-forward design language with a halogen headlamp, LED tail light and LED winkers. The sleek tail section is complemented by a meaty tyre and an underbelly exhaust. The exhaust tip is finished in black and even the engine cowl gets a black finish as opposed to orange, white and black graphics in the BS4-compliant version.

The KTM 125 Duke BS6 is loaded with an informative full-LCD instrument cluster. It displays speed, tachometer readings, fuel level, clock, range, distance to empty, and average speed, among other data. The indicators and tail lamp are LED whereas the headlamp is halogen. As far as safety is concerned, it comes with a single-channel ABS.

A price tag of Rs 1.18 lakh (ex-showroom) almost sounds ridiculous for a 125cc motorcycle. But the KTM 125 Duke stands as the most premium motorcycle in this capacity segment. Ever since the 125 Duke made its original debut in concept form at the 2009 EICMA show, there had been speculation of the bike making its way to India. 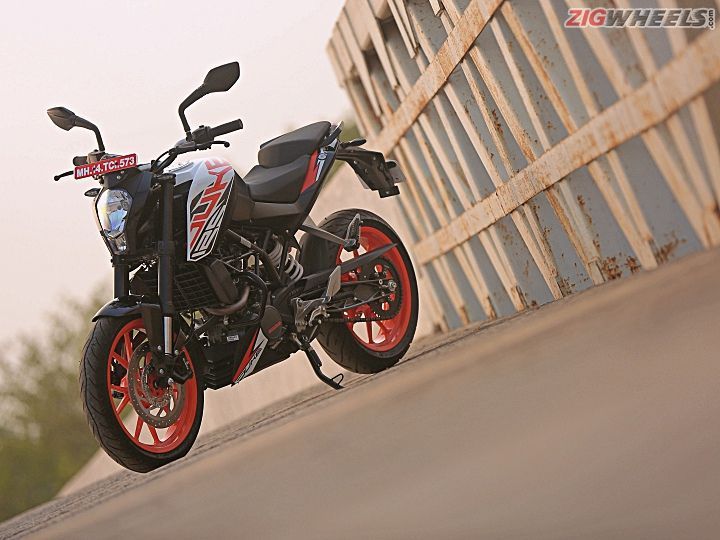 Even after the production bike was launched in Europe in 2011, with the 200 Duke coming to India in the following year, interest in the smallest Duke lingered on. But there was always a question of whether Indian buyers would be willing to pay premium buck for such a small capacity motorcycle, no matter how vocal some enthusiasts got about their love for this baby(est) Duke. Now though, KTM India believes that there exist enough customers who wouldn’t mind putting their money where there mouths are.

Been there, seen that 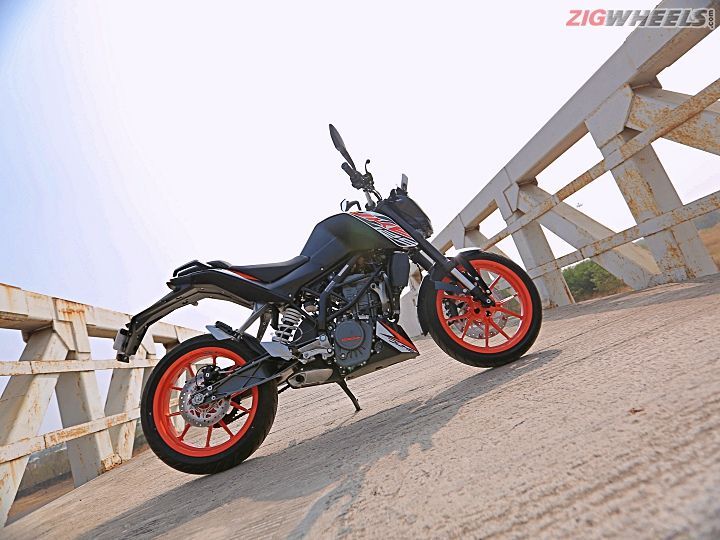 Unlike the second generation 125 Duke in Europe, which borrows its sharper and more aggressive styling from the new 390 Duke, the bike that we’ve got in India carries forward the last-gen design. Which means, it’s almost indistinguishable from the 200 Duke. It gets the same three colour options - black, white and orange, along with the black painted trellis frame and mad orange wheels. 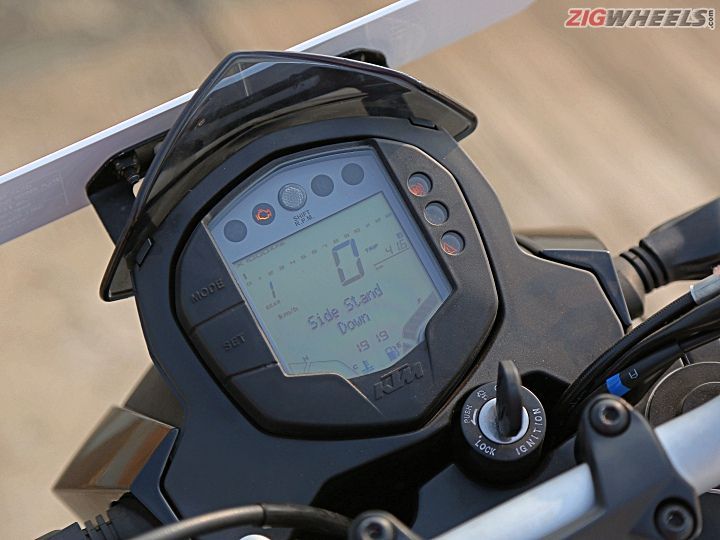 All the other bits are carried over too, such as the halogen headlight, the slim LED indicators, the LED tail light and even that compact, yet highly informative digital instrument cluster. The only real differentiating factor is the stickering on the tank, and we think that the tank graphics of the 125 look more youthful compared to the 200s. 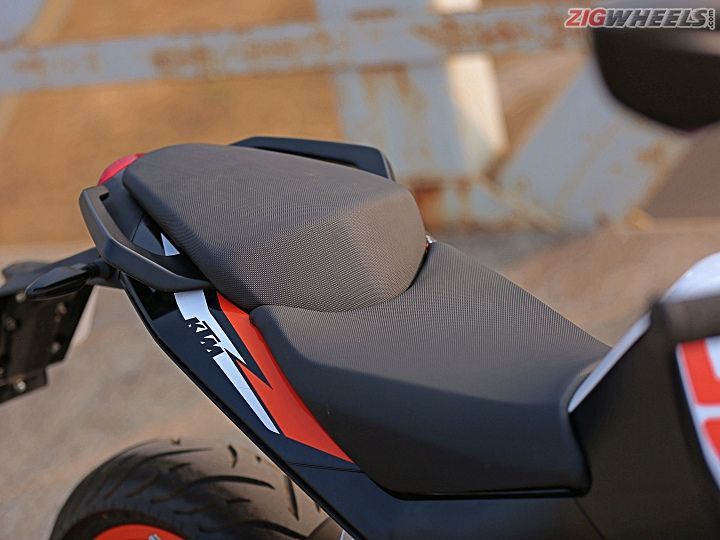 Hop on to the seat, and it’s all a very familiar experience. Now, I actually own a 2013 390 Duke, and I’m right at home in the marginally tall 818mm saddle. The seat itself is pretty much identical to the current 200 and the last-gen 390. That seat did get some flak for being a bit on the harder side, which does work in its favour for riding long distances. But considering that the 125 will spend most of its time in the urban environment, this might be a bit of a concern. Then again, it’s got the same rear set footpegs and wide handlebars for an upright, yet aggressive stance - great if you want some corner carving fun. 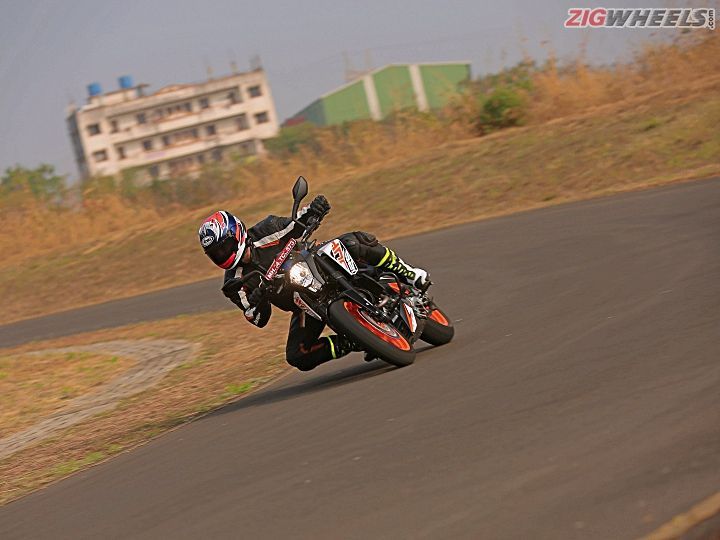 Speaking of corner carving fun, that’s something the 125 Duke manages really well too, thanks to the same underpinnings as its larger siblings. That said, the frame itself is from the MY16 bikes, not from the 2017 models (both 125 and 390) as the new one uses a bolt-on subframe and even slightly altered steering geometry. It’s not really an issue though, as even this chassis is extremely capable and has been designed with the tolerances of a 45-odd horsepower motorcycle in mind. And of course, the 125 Duke runs the most advanced suspension you’ll see on any 125cc motorcycle in India. 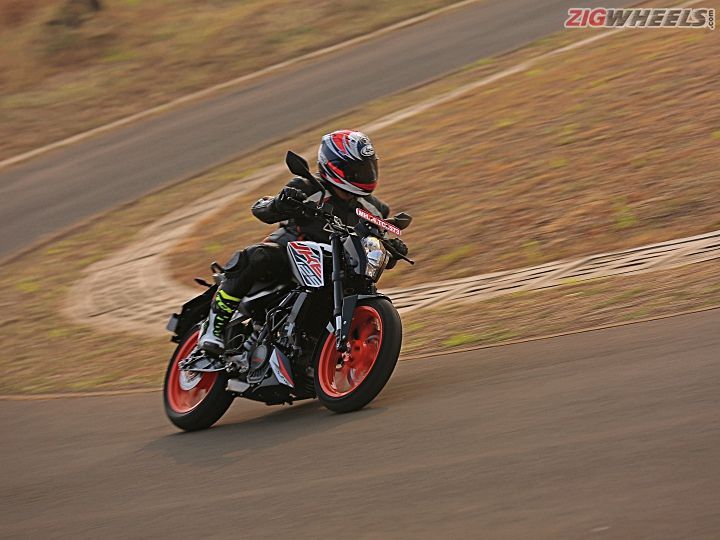 The front uses 43mm upside down forks, but again, these are not the cartridge type, separate function units that the new 390 gets. Instead, these are the ones that have been on the 200 Duke ever since 2012. The rear gets a preload adjustable monoshock, and both front and rear units have been designed by suspension specialist WP. Even the rubber here is familiar - MRF Revz-C1 radials (110/70 R17 at the front and 150/60 R17 at the rear), the same that you get on the 200 now. 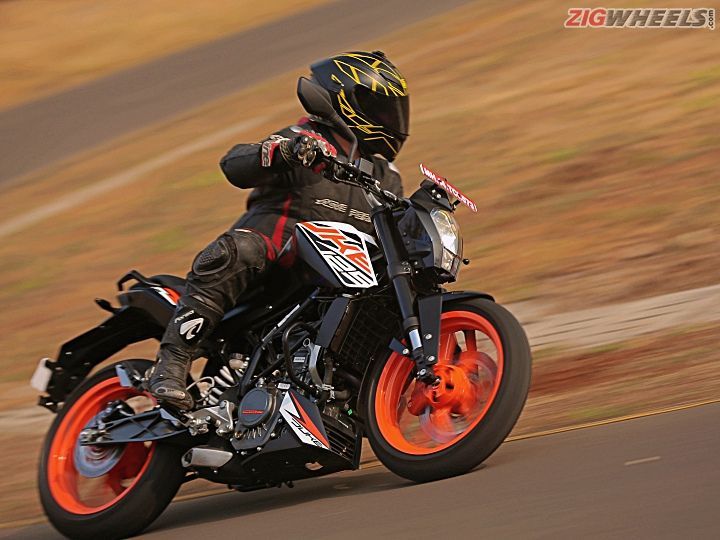 Put all that together and you get a bike that handles really well. It’s a very agile motorcycle that’s eager to turn into corners at any provocation. This is thanks to a short(ish) wheelbase of 1366mm and a light(ish) kerb weight of 148kg (which is actually identical to the 200s). There's plenty of confidence while leaning over as well - the MRF radials do a great job of gripping the tarmac, even at silly lean angles. But this 125 Duke really highlights the capability of this KTM chassis. 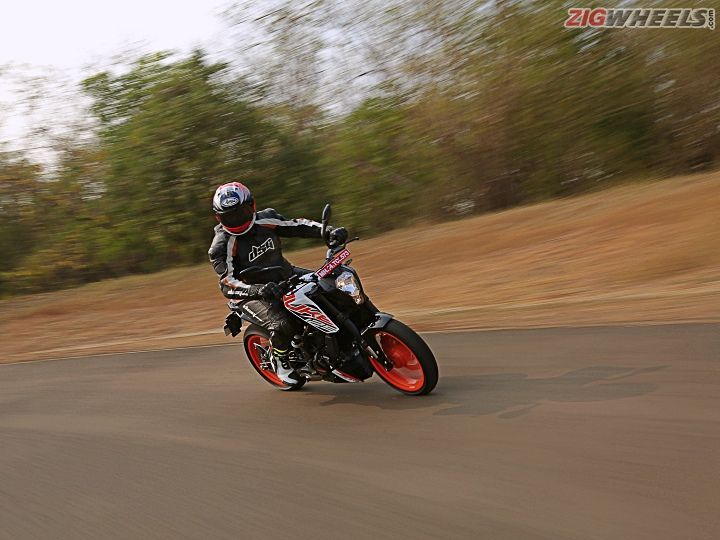 Since you don’t have too much power to get into trouble easily, you’ll find yourself opening the throttle with reckless abandon through the turns, with this baby Duke coping with ease. That said, ride quality isn’t something we can comment on, since we rode it on the smooth surface of the Bajaj test track in Chakan. But if the 200 is anything to go by, it’s going to be slightly on the stiffer side over bad roads. 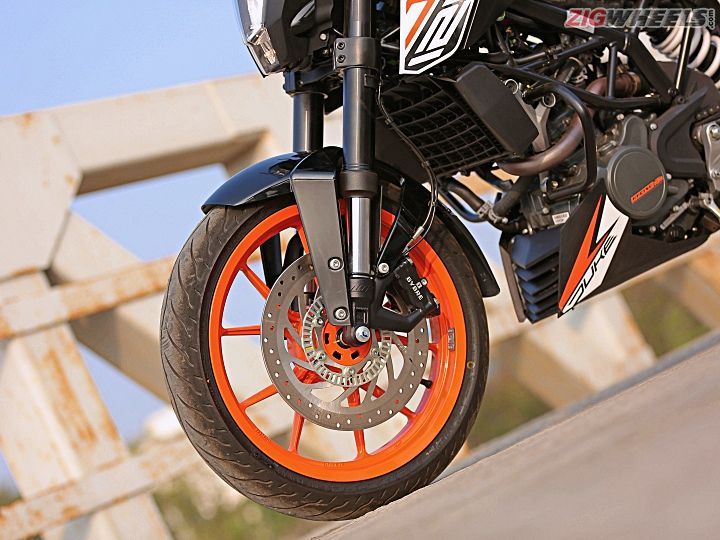 With new rules coming into force from April 2019 which mandate combined brakes on bikes below 125cc and ABS on those with larger capacities, the KTM 125 Duke becomes the first 125cc motorcycle in the country to get anti-lock brakes. This is a single-channel unit though - similar to what we’ve seen on the 200 Duke. ABS intervention seems to have been calibrated quite well too, with the system barely kicking in when going hard on the brakes during our first ride. That said, this behaviour was on a grippy race track surface. We’ll only figure out how it behaves on loose surfaces once we get the 125 out in the real world for a road test. 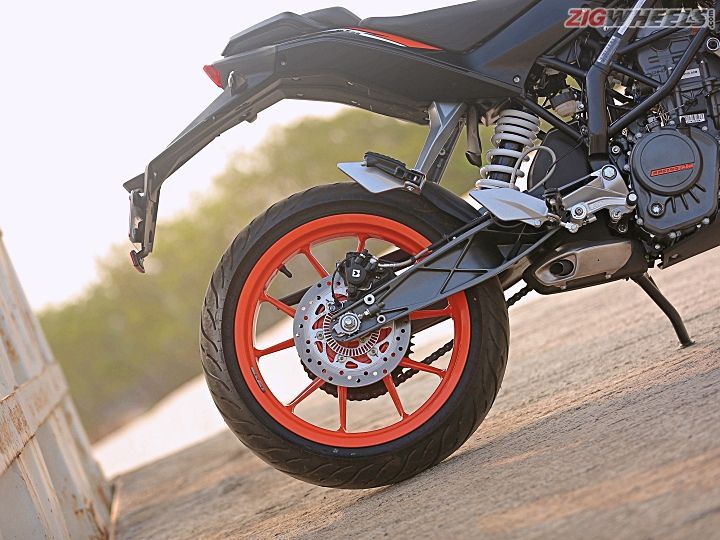 But the brake components themselves are top drawer - a 300mm disc at the front with twin-pot radial calipers and a 230mm disc at the rear with a single-pot floating caliper by ByBre. So braking performance is quite good, with plenty of bite. Brake feel, however, isn’t so great and there’s a distinct lack of progression when you squeeze the lever. 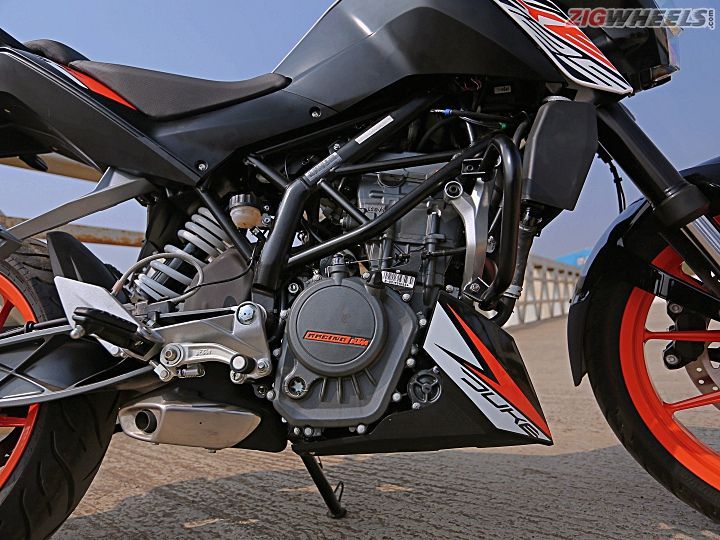 While the 125 Duke’s 124.7cc single-cylinder, 4-valve liquid-cooled motor is new for India, the mill itself is something that has been around for a while. It’s essentially from the last generation European 125 Duke, so there’s no ride-by-wire throttle here like the current-gen 125. In fact, externally, this engine looks identical to the 200’s motor and that’s because the 200 is a bored out version of the 125cc block. With now a smaller bore compared to the 200 Duke (58mm vs 72mm) and a marginally shorter stroke (47.2mm vs 49mm), this 125 motor isn’t as quick to build revs as the 200. 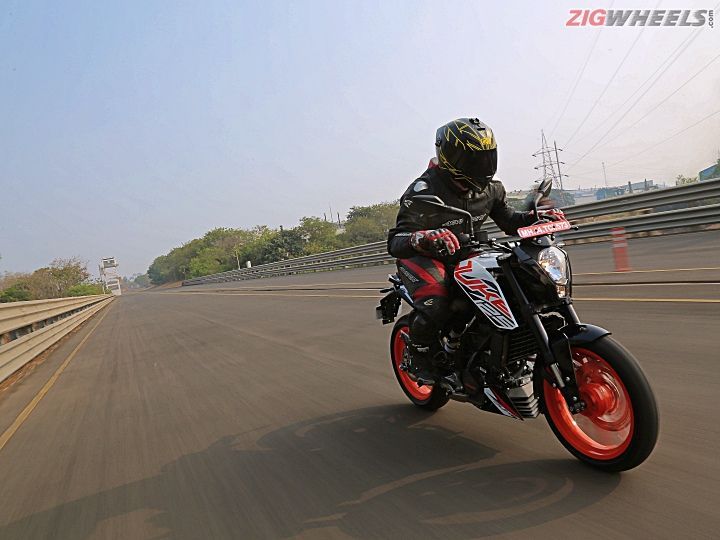 Of course, performance isn’t mindblowing either. With 14.5PS of power on tap, it’s more at par with 150cc motorcycles such as the Bajaj Pulsar 150 and Suzuki Gixxer. But the torque is much lower here - just 12Nm. Honestly, though, you can’t expect much more from such a small engine. Power delivery here is quite linear and easy to manage. You do get a minor surge in torque at around the 7000rpm mark, and the bike pulls cleanly till its redline of a little over 10,000rpm. But don’t think that you’ll be winning any drag races here, unless you’re going up against bikes in the same cubic capacity bracket. 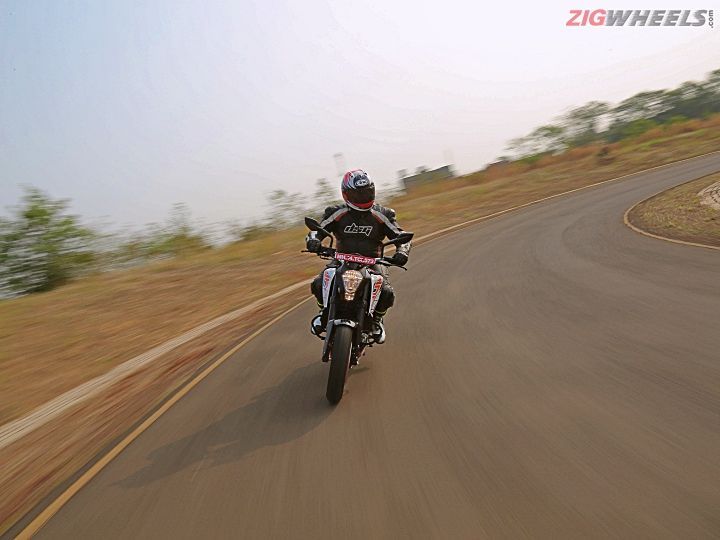 And then, the gearing feels a little on the taller side. So while you’re getting decent acceleration in fifth gear - on the back straight of the Bajaj track, we were able to get up to a speedo-indicated 105-106kmph in fifth -, slot into sixth and the bike feels like it’s run out of steam. Using the slope leading into the banked corner at the track, we were able to see about 116-117kmph, but you won’t get to these speeds easily on a level road. 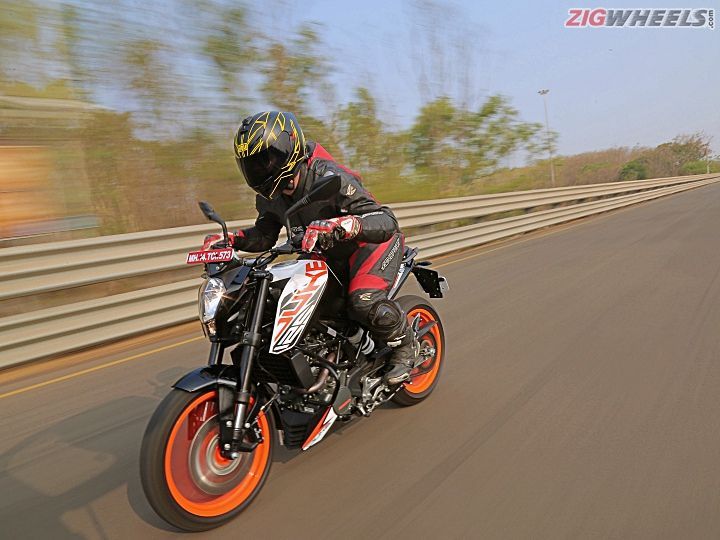 But one upshot of this easy-going engine is refinement. Honestly, this 125cc motor is the smoothest we’ve experienced on any KTM till date, at least in India, with us often hitting the limiter without realising it. The other advantage here is improved fuel efficiency, which KTM assures is about 15 per cent more than the 200’s. Another surprisingly delightful aspect of this motor is the way it sounds, with its higher pitch note almost mimicking a two-stroke.

Whom is it for? 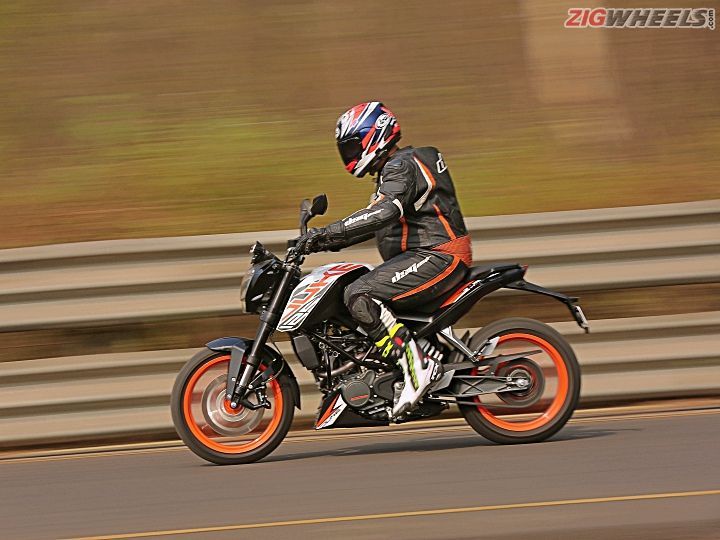 KTM says that the 125 Duke is squarely aimed at those who want a KTM, but feel that a 200 might be too much. Now as an enthusiast, it sounds a bit silly that 25PS of power is difficult to handle, but in the urban Indian context, the 200 does feel a little fast to those who prefer riding at a more sedate pace. The 125 here is providing that quintessential KTM Duke experience in a more manageable package.

And then there’s the question of price. Yes, at Rs 1.18 lakh (ex-showroom Delhi), the KTM 125 Duke isn’t cheap by any means. But then, the previous entry-level Duke, the 200, thanks to increased prices and the 5-year insurance mandate, costs two lakh rupees on-road in most cities. This moved the entry point into the KTM family so far ahead, that the company really needed something to fill that gap. In fact, this 125 is priced at almost exactly the same point the 200 was when it was first launched back in 2012. 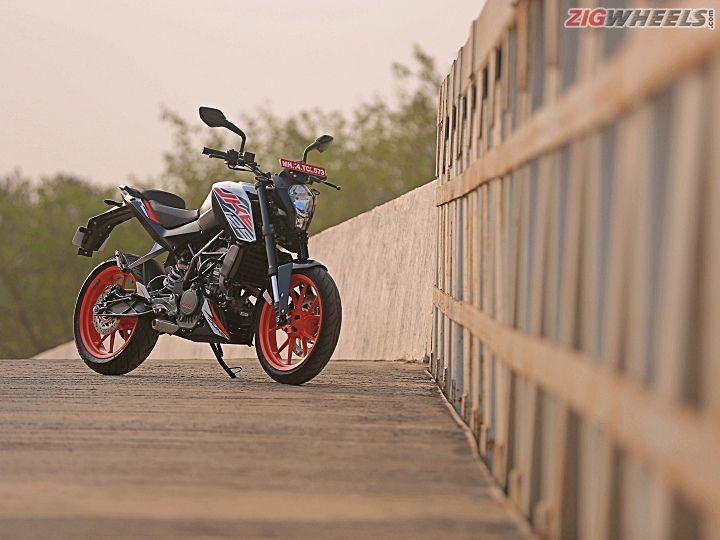 So the real question then is that is it worth its asking price? While the 125 Duke is a really fun bike to ride, and feels as premium as any of its other siblings, from a performance point of view, it doesn’t really qualify as great value. But as an entry-level KTM, we think it does!

Is there enough KTM DNA in the 125 Duke to justify its high asking price of Rs 1.18 lakh?

What are the colours available in KTM Duke 125?