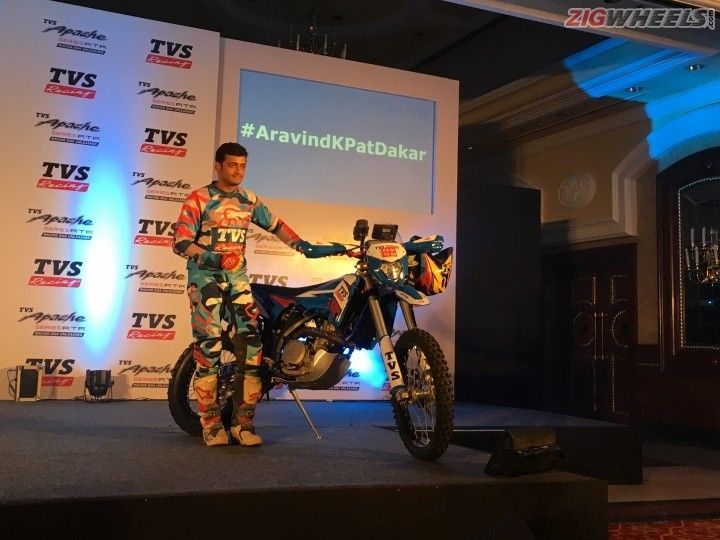 Slowly but steadily, Indian motorsport personalities are making their mark on various international stages, in disciplines as diverse as Formula 1 to superbikes to GT racing to cross country rallying. In this last field, after ace Indian rallyist CS Santosh was picked up by Hero MotoSports to represent the team at the 2017 Dakar Rally, it is now the time for another young blood to prove his mettle at the toughest rally in the world.

Multiple-time national dirt track and motocross champion Aravind KP will be racing for the Sherco-TVS Rally Factory Team in next year’s Dakar rally which is scheduled to start on January 2, 2017. Aravind is no stranger to this gruelling discipline either, having started racing at the age of 19 in 2005. He has been with TVS Racing since 2006, when the team spotted him at the Gulf Dirt Track National Championship. After that, Aravind has won 15 National Championships in Dirt track, Rallies and Motocross and became the first Indian to win an overseas Motocross Championship in Sri Lanka in 2011.

Aravind will team-up with Spanish Champion Juan Pedrero who is already part of the Sherco-TVS Rally Factory team and represented the team in 2016 season. The third rider of the team will be announced soon and will most probably be a European rider.

Commenting on the sponsorship, Aravind KP said, “It’s quite an unbelievable feeling to be selected to race at Dakar Rally and I couldn’t ask for a better team than ‘Sherco-TVS Rally Factory’ team to race for. TVS Racing and I have a strong relationship and I thank them for bestowing their faith in my abilities. The next few months of preparation with the Sherco-TVS crew will be crucial as I train on what it takes to participate in Dakar Rally 2017."

This is the third consecutive year that Sherco-TVS team will be participating in the Dakar Rally. In its current iteration, the rally runs through three countries, Paraguay, Argentina and Bolivia, covering 9000 kilometers.