Tata Tigor EV vs i-CNG: Which Is Frugal Yet Fun?

We’ve got two Tigors that take completely different paths to be eco-friendly. Does it make a difference in the sedan’s overall dynamics? 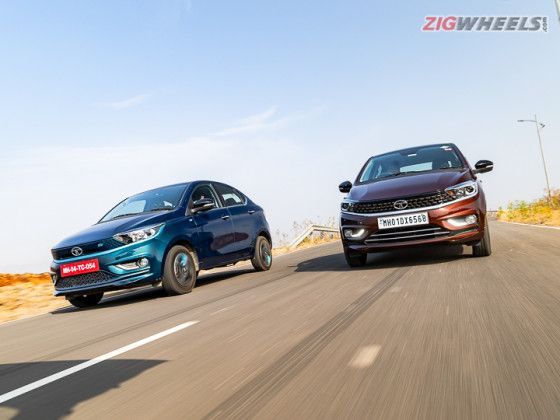 In the race for finding the cleanest fuel source for cars, it’s quite rare to see a carmaker offer a model with not one, but two different alternatives. Tata has managed to pull that off with the entry-level Tigor sedan that is available in petrol, CNG and electric guises. The question is, which of the two alternatives to the petrol Tigor is the better sedan to drive? We decided to have a bit of fun in true Zig fashion and pitched them head-to-head in three key aspects:

Before we head into our scientific tests on the two sedans, let’s take a look at their mechanicals. While the way the powertrains make their grunt is vastly different, they’re actually quite similar in outright grunt.

In fact in our acceleration runs, it was the EV that had the upper hand, but this was only possible when the EV was whacked on to Sport mode. The Tigor i-CNG’s performance is a lot more comparable when the EV is in the standard Drive mode.

One of the reasons why the EV wins here is the electric motor’s instantaneous torque when putting your foot to the floor, while the CNG needs a little longer to wind up the grunt. But, having a drag race is just one aspect of comparing driving dynamics. So bring on the Zig games.

In simple terms, this drill has us flooring the sedans to 80kmph and 100kmph and then stomping the brake pedal till they come to a stop. The Tigor that takes the shortest distance to stop wins. So who won?

In the 80-0kmph run, the Tigor CNG had quite the edge, coming to a halt almost six metres before the EV. But, stop at the faster 100kmph mark and the gap is reduced by nearly half. In both sedans you could feel confident on the brake pedal without worrying about any instability, which is good. One of the reasons behind the CNG winning out over the EV is the former being a whole human lighter than the latter.

So point one to the CNG (a tie if you count our acceleration test).

Bringing out the cones toward the outside of a corner, we took our test corner at a couple of different speeds to see which one can tackle bends the best without hitting the cones. We hopped on board the EV first for the 60kmph run, and it managed to glide through this test. The CNG model cleared the cones with breeze too. But, understeer does start to kick in in both sedans with their tyres screaming for respite.

Deciding to up the ante, we ran the two Tigors at 65kmph, and it was the CNG that managed to pass the test, but not without a small snap of oversteer at the corner exit. Not surprising considering the weight of the added CNG tank in the boot. As for the EV, it just about failed the test as the sedan suffered more understeer to the point that the rear hit a cone at the exit of the corner.

Why the CNG handled this test better is the fact that it's over 110kg lighter than the EV, which helped in reducing the understeer effect. As a bonus, we tried having the CNG tackle the corner at 70kmph, but it was just too much for the sedan to handle. It had a massive wash of understeer, knocking almost half the cones over, followed by a small snap of oversteer in the end.

So while we wouldn’t recommend trying to be Aryton Senna or Micheal Schumacher in the two Tigors, they still manage to handle bends at speeds up to 65kmph. But if you’re looking for a winner, it's the Tigor CNG coming out on top here too.

Considering the two cars we’re comparing are essentially the same model with different powertrains, we were hard-pressed to find any differences in driving these two sedans around the urban jungle. Sure, the EV is easier for stop-go traffic situations, but the CNG’s gearbox and clutch setup is good enough for daily driving. In an overtaking situation it's better to switch the EV into Sport mode if you want to make things quick. However, the CNG doesn’t have that luxury, and takes time to spool up the grunt necessary to pull off an overtake.

Step out on rough roads, and the differences are a lot more clear. In the EV, you’ll definitely feel the bumps as a stiffer setup means a lot of side to side movement which can get quite uncomfortable. Hop on to the CNG model though, and it was a lot more compliant over rough terrain. Sure, there’s side to side movement as well, but it is tolerable to the point that the CNG wins out here as well.

Which One To Pick?

The Tigor EV, like most electric vehicles in the country, still has a few issues. Its limited range limits it to the city, so it's difficult to pick it as your only car and a lack of a widespread and reliable charging infrastructure is also still an issue.

To drive around, both Tigors shine in different ways. The EV has a clear edge if you’re going for a drag race, but that’s only possible in the Sport mode. The CNG, on the other hand, rides and handles better, and is closely matched with the EV when the latter is in the standard Drive mode and so was a clear winner in our tests.

It's easier to pick the CNG then. It's a lot more economical to purchase, easier to run and justify as an only car, while still being lighter on the wallet. Sure the EV is a lot pricier, but it's got a big emotional connection too with the pride one gets in doing something for the greater good. But justifying the price jump is difficult, and hard to fault should one choose to take the plunge. 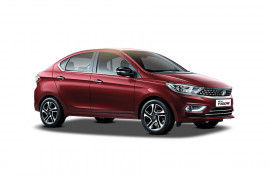 All Comparisons of Tigor