Honda has launched the facelifted Amaze with styling upgrades and few additional features. Have these made the Amaze any more exciting? 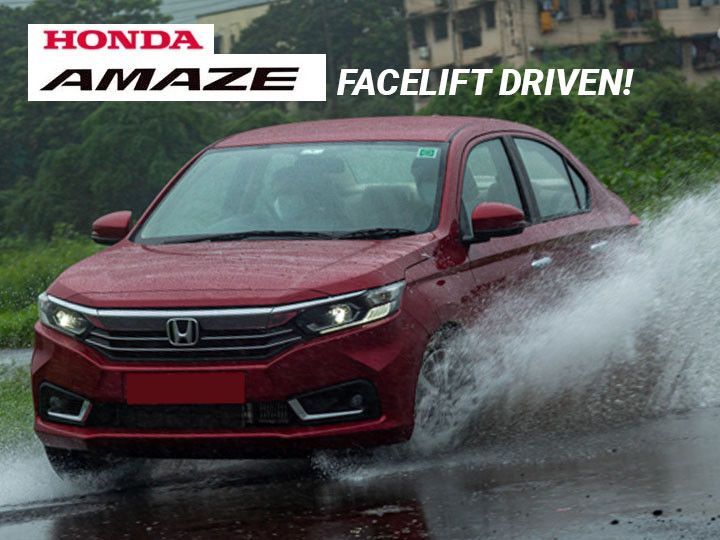 The Honda Amaze remains one of the most affordable, comfortable, and practical sedans in the country. After debuting in 2013, it received a much-needed generation update in 2018. And now, after three years, Honda has introduced a mid-life update. The facelifted Amaze packs some subtle design changes and a couple of new features. But have these added to the sedan’s appeal? Let’s find out.

What Are The Changes?

The Honda Amaze has always been a handsome car. Yes, the facelift has refreshed the look slightly but hasn’t really made a big difference. In fact, you might not be able to tell unless you stop and take a good look. Changes up front include two new chrome slats on the grille (like the Accord had), chrome detailing on the fog lamp covering, and new automatic LED projector headlamps, DRLs, and fog lamps.

There are also new 15-inch dual-tone alloy wheels inspired by the fourth-gen City. However, these are still wrapped in skinny 175-section tyres. At the back, it gets new LED guide lights and a chrome garnish on the bumper. Plus, do not forget its new Meteoroid Grey shade.

The cabin remains largely unchanged, save for the new stitching on the beige upholstery, generous use of silver on the door panels, dashboard, and steering wheel, front map lamps, multi-view rear camera angles, and leather cover for the gear lever. We reckon these barely make any difference, and again, aren’t even noticeable if you’re not familiar with the pre-facelift Amaze.

One of the highlights of the cabin has to be the neatly laid-out dashboard. The dual-tone beige-and-black theme lends the cabin a premium feel while brightening it up, really. The fit and finish quality is impressive, and despite the use of hard plastic, it doesn’t feel cheap. The cushioning is soft, and you’ll feel at home if you’re spending a short duration inside the car.

The facelifted Amaze gets automatic LED projector headlamps and fog lamps. You get features such as automatic AC, cruise control (still only for the manual variants), paddle shifters (only for the petrol-CVT), a 7-inch touchscreen infotainment system with Android Auto and Apple CarPlay, a rear parking camera, and push-button start/stop. However, it still misses out on a leather-wrapped steering, rear AC vents, and paddle shifters for the diesel-CVT combine. Honda should have taken this opportunity to include a wireless charger, better MID, and at least, adjustable rear headrests.

The cabin is practical too, with 1-litre bottle holders on every door, a large glove box, two cup holders on the centre console, a phone docking station, two USB sockets up front, and a rear centre armrest integrated with two cup holders. However, we would have liked adjustable rear headrests and a USB socket at the back.

On our short drive, we first drove the petrol-manual drivetrain, which gets a 90PS 1.2-litre engine paired with a 5-speed manual. Later, we drove the CVT.  While the power delivery from this petrol engine is acceptable for city commutes, the overall performance has to be one of its weakest links.

To begin with, the engine is  refined and offers a smooth pickup. In bumper-to-bumper traffic, the sedan will ‘amaze’ you. However, it falls short in its mid-range and doesn't offer strong acceleration. The engine lacks the juice it requires for overtakes, and while it starts to come to life after crossing 2500-3000 RPM, getting there requires patience. So, most of the time, you will find yourself shifting down gears or patiently waiting for the engine to get moving quickly. It’s lack of punch is especially felt on hilly terrain or even dual carriageways where overtakes need to be quick.

The petrol-CVT is the ideal commuter setup. It complements the nature of the engine and offers you a smooth and relaxed drive. If you are going to spend a lot of time looking at tail lamps, the petrol CVT is the one to pick. And like the manual, do not expect exciting performance.

The Amaze’s 100PS 1.5-litre diesel engine has to be the complete opposite of the petrol punchy and exciting. This engine gets a strong mid-range and feels like a sweet-revving motor. Another great thing is that ample torque is available even towards the low-range, which saves your time and energy shifting down the gears. You will appreciate the torque and response it offers with the slightest of tap. However, one thing that some might complain about is that the engine does feel a tad bit vibey. We didn't get to drive the diesel-CVT drivetrain, but will surely do later on our road test.

The clutch is towards the heavier side, which might trouble you in bumper-to-bumper traffic. On the other hand, the five-speed gearbox has short throws and is quite slick, really. Be it on the highway or within the city, the diesel is our pick of the two.

The facelifted Amaze is meant for the city, and that only gets more evident with the suspension setup. It is on the softer side and handles potholes like a charm. It’s not that you won’t feel the undulations ( there is a bit of movement in the cabin), but the Amaze ensures there’s no harshness.

The front and rear seats make for equally relaxed seating. You sit at the back, and you will feel that the Amaze just floats over potholes, offering a pure sedan-like experience and making your city and highway runs comfortable. We do wish it settled a tad bit quicker after bumps, but most buyers will appreciate the cushioning abilities more.

The steering wheel has balance to it, but it isn’t sharp. It feels light in the city and weighs up nicely at higher speeds. However, this is not a sporty setup. Try pushing it through the corners and you will feel a lack of communication and a bit of laziness during quick direction changes.

The Honda Amaze scores well in most departments:  - a punchy diesel motor, sedan-like comfort, and a well-loaded practical cabin. The weak link has to be its petrol engine, which is extremely refined and just about acceptable for city commutes but not for spirited driving. If you want a more exciting petrol sedan, you might want to look at the Aura’s turbo-petrol or, even the the Dzire petrol.

If you are fixated on the Amaze, go for the diesel engine. It will keep you satisfied, irrespective of whether you’re an enthusiastic driver or the commuter. Dial in the decent fuel economy, and you have pretty much a winner.

Starting at Rs 6.32 lakh going up to Rs 11.15 lakh (ex-showroom Delhi), the facelifted Amaze is the costliest sedan in its segment. That said, it does make for a very capable and appealing car that retains Honda’s solidity and comfort.