We got a chance to briefly sample Skoda’s replacement for the Yeti, the Karoq, on the roads just outside Prague. With its India launch scheduled next year, does the SUV have the potential to create a space for itself in a heavily crowded segment? 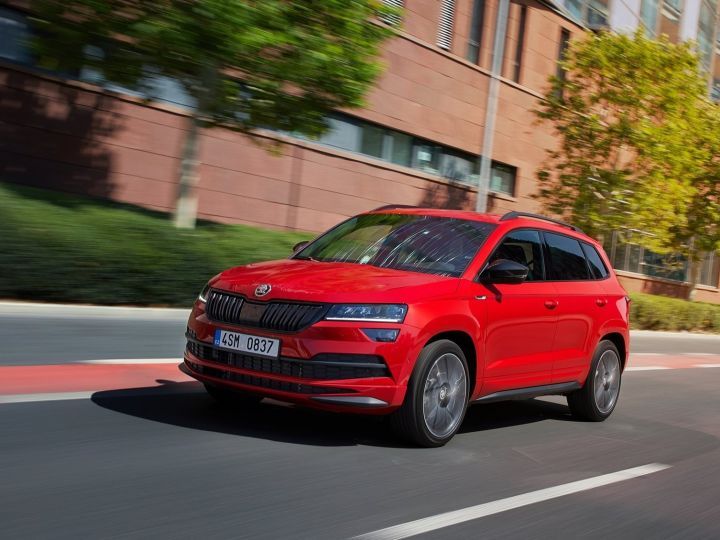 With Skoda leading the charge for the Volkswagen Group in India, their next big aim are SUVs. Next year, the car maker from Czech will launch two new SUVs in India: the Creta-rivaling Kamiq-based SUV and the Compass-rivaling Karoq. While the former is still in development, we got a chance to drive the latter in Skoda’s hometown in its sporty Sportline trim. Does Skoda have a blockbuster on its hands or it is it going to fizz out amid the competition?

That essentially depends on your taste in cars. If you like your SUVs big, bold and aggressive, then probably not. But if you are a connoisseur of elegance and a general admirer of Skoda designs, then yes. The Karoq isn’t as long and tall as the Jeep Compass but it is wider and lower, which gives it a more prominent stance. It's a very clean looking SUV with a muscular bonnet and grille, a typical Skoda shoulder line and a sloping roofline which makes it look very simple yet classic. We wish the front of the SUV was more distinct than the Kodiaq as the similar headlamps and fog lamps will end up confusing onlookers. The headlamps, however, gets the Skoda ‘eyelashes’, adaptive lighting and LED DRLs which double up as indicators.

Because this is a Sportline trim, you get some blacked out elements like the grille, 18-inch wheels (not the ones in the images), ORVM covers and black roof rails. Compared to the standard Karoq, the Sportline surely looks more premium. The angle from which the SUV looks the best, though, is the rear three-quarters. The sharp taillamps and the kink in the window line really do make it look modern. And while the Karoq might not have the larger dimensions of the Kodiaq, the low and wide stance does lend it a strong personality.

The interiors of the Karoq are also very familiar. It gets a 10.25-inch virtual cockpit for the driver and a leather wrapped flat-bottom steering wheel in the Sportline variant. The dashboard gets a 9.2-inch touchscreen display in the centre flanked by the centre AC vents. While all of this looks familiar, the connection to the Kodiaq again is strong, with a similar centre console with controls to the dual-zone AC, heated seats and parking assist. The electronic parking brake and the mode selector is placed below the gear shifter.

Quality everywhere is typically Skoda, with soft-touch materials on the dash and a good finish. The Sportline gets black sport seats with contrast stitching which feel super comfortable and tuck the passenger in. But the one we were driving did not get electric seat adjustment even for the driver. Expect it to feature in the top variant of the SUV we get in India.

At the back, you get plenty of space. There is ample leg- and knee-room on offer, even for the taller passengers. The seat-base length is also long and offer good under-thigh support as well. The cabin is also wide enough to get three people comfortably in. What's also impressive is the headroom on offer despite having a ginormous sunroof. However, what hampers the experience marginally is the high window line and the large front seats which obstruct the overall visibility.

The boot space is large enough to accommodate your weekend luggage along with some larger articles. Further space can be opened up by folding the rearseats as well.

The Karoq we drove had a 1.5-litre TSI petrol motor, which we haven't seen any of the Indian cars, under the bonnet. It makes 150SP of power and a healthy 250Nm of torque. Refinement levels are high and there any no vibrations or engine feedback coming into the cabin. However, it can be heard quite easily, although it is not loud enough to be a bother in your daily drives.

The best part of the motor is its eagerness to build speeds. Like the TSI motors we have driven in the past, this engine likes to be revved hard. It revs close to 6,000 rpm when you decide to put your foot down and will get to 100kmph in a claimed 8.9 seconds, a whole second faster than the Jeep Compass’ tested figure. And while it isn't the fastest SUV we have driven, it does build pace briskly post 2000 rpm. The happy revving nature will surely be liked by enthusiasts in the country.

It's only when you are picking speeds from lower revs that the Karoq tends to feel a bit lazy. It takes time to build the initial acceleration and while you don't always have to downshift to a lower gear to get going, it's recommended if you want to get going quickly. But if you are in the mood to cruise at a leisurely pace in the city, the Karoq with the 6-speed manual feels surprisingly tractable and lets you be in second-third gear all day long.

The Karoq isn't just similar in looks to its bigger brother, it rides like the Kodiaq as well. You get the typical side-to-side movement of the body at lower speeds and that's where the suspension feels a bit stiff. But as you get going, the ride improves and the Karoq remains surprisingly comfortable over undulations and speed breakers. It's even quick to settle down after you go over a bump and offers a planted ride, both in the city and on the highways. It's only when you hit a sharp surface change or pothole when the cabin feels a jerk. However, the suspension remains super silent at all times. In India, expect the seat cushioning and the suspension setup to be further soften up to keep things even more comfortable.

When it comes to handling, the Kodiaq offers good feedback from the steering wheel. It remains light enough to be comfortable in the city but picks up the right weight for the highways. There is a bit of body roll in corners but the Karoq otherwise remains flat while making lane changes. The balance between ride quality and handling is so well maintained here that the Karoq can actually just be given the same setup for India and still remain comfortable as an urban SUV.

In the little time that we had with the Skoda Karoq, it has turned out to be an SUV with a lot of potential. It packs a very spacious and upmarket cabin to keep the family happy, an engine that strikes the right balance between fun and practical, and a suspension setup already ready for Indian roads. The only place where the Karoq can fall short is the looks. Not because it's not a good looking SUV, but because it lacks the traditional muscular flavour which our market generally goes for. The only thing which can overturn this issue can be the cost. But with the pricing expected to be slightly more than the Jeep Compass, the popularity of the Karoq could be limited, with people looking for a quality experience rather than one which makes them stand out.