The 520d managed a beautiful balance between an enthusiast’s delight and a luxury sedan but will the 530d’s additional horsepower and torque shift the focus back to the driver? 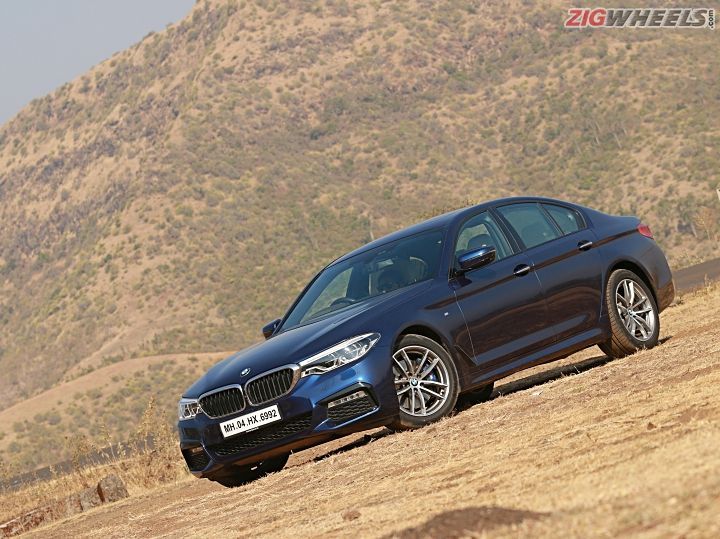 The BMW 5-series is now into its seventh generation, replacing the rather less loved F10 series that came before it. The F10 tried to make the shift towards being a more comfortable, more classy car that could be enjoyed from the rear bench. And for this very reason it got a lot of criticism for taking away too much from the experience of getting behind the wheel of a BMW. From what we’ve seen in the 520d we know that the new G30 series has changed a lot for the the better, and we can’t wait to see how that extra dollop of power and torque from the 3-litre in the 530d adds to that equation.

Dressed up
On the outside though, the changes are quite subtle for an all new generation. The new 5-Series is based on the same platform as the 7-Series, and that allows it to be 36mm longer, 6mm wider, 2mm taller and have a 7mm longer wheelbase than the F10. The new platform also has made use of more aluminum in the doors, bonnet and the roof, and this has allowed BMW to shave off as much as 100kg in the construction of the body. So while its dimensions have increased it now weighs less as well.

The 530d M Sport and the 520d look a lot like the cars they replace and only if you have them parked side by side with their predecessors do you start to notice the subtle differences. The nose (or overhang) has grown a little with the addition of the new all-LED headlamps and the mechanical louvres behind the kidney grill. The roof also extends a little further back towards the boot and this gives the impression that it’s not such a large mass sticking out behind. Probably one of the reasons that from some angles it looks a lot like the 3-series. There is also now a little vertical chrome accent just aft of the front wheels and the shoulder line now has an extra character line that angles upwards slightly as it makes it way to the base of the C-pillar. The M Sport trim adds a more aggressive front bumper, side skirting, sporty rear bumper and larger 275-section tyres at the rear compared to the 245’s in the front. Also hard to miss are the blue M Sport calipers that peek out from inside the 10-spoke 18-inch alloys that are also peculiar to the 530d M Sport.

Packing a punch
The 530d gets a new B57 engine, a more powerful 3-litre, straight six, turbocharged diesel that makes 265PS of power (up from 245PS) and 620Nm of torque (up from 540Nm). This is mated to the same 8-speed ZF gearbox from before. Shifts are smooth in the city and super fast when pushed hard. And the 530d likes to be pushed hard. With launch control engaged we managed a sprint to 100kmph in 5.73 seconds, just a few tenths off the claimed 5.7 second figure from BMW. Kick down acceleration from 20kmph to 80kmph takes just 3.74s. That makes it over 2 seconds quicker to 100kmph and nearly 2 seconds quicker in kickdown than the 520d and that’s as near supercar territory almost anyone would need any luxury sedan to get.

When driving around in a more civilised fashion the engine is quiet and you only do hear it start to snarl when revs creep up over 2500rpm. Like the 520d, there are four drive modes to choose from: Eco Pro, Comfort, Sports and Sports+; or you could leave it in adaptive and let the 530d decide for you. Comfort is your everyday mode, with a nice weight to the steering that’s a nice balance between being firm and yet manageable in city traffic. The response from the straight six is also spot on for urban duties - smooth and linear and with overtaking grunt just a toe poke away. In Eco Pro mode the steering response remains the same as Comfort but throttle response calms down a lot more. It’s not the most engaging mode to drive in and we only see this being used when you’re being driven. Or when doing fuel efficiency runs on a road test, where we managed to eke out 17.70kmpl on the highway and 10.60kmpl in the city.

When you’re on your way home after a long day at work and the roads are empty or you’re just out on a sunday drive, Sport+ brings the fun, in bucketfuls. The steering is sharper and more weighty while the throttle changes to head-jerkingly responsive. The electronic dampers also noticeably stiffen up to provide less roll and squat when going around corners. It’s still nearly five metres long and tips the scales at 1.7 tonnes so it doesn’t magically transform into a sports car, but it does make the driving experience heaps different and delightfully engaging.

In both Eco Pro and Comfort the suspension stays in its most comfortable setting and that really manages to take care of most bumps and road irregularities you’ll come across. It’s not overly soft or floaty and the cabin remains nicely composed. You do still feel small vibrations and a little noise from bumps do filter through but they are not really worth much complaint. It really does what it says on the button - it’s comfortable. The best part is that even in Comfort or even Eco Pro the 530d still is fun behind the wheel.

Still plush?
The new platform has made for a more spacious cabin and the M Sport is the most kitted out of the lot. The driver seats sport the most adjustment and support along with a memory function on the passenger side as well. The 530d borrows a lot of kit from the 7-Series, including the same 10.25-inch touchscreen and an all-digital driver dash that changes dials for each drive mode.

The dash is also a cleaner, more driver-focused design with less buttons and knobs and more touch functions, like the the new air con controls, which are not the easiest to use if you have fat fingers.

Also unique to the M Sport (within the 5 Series range) is the heads-up display that gives you speed and navigation alerts. There’s also gesture control that allows you to adjust volume, answer or reject calls and change audio tracks or radio stations while making you look a little mental to fellow road goers if you try this at a stop light.

Rear passengers also get their own set of 10.2-inch multimedia screens that are controllable via a small remote. While the remote is perfectly functional, the proximity of the screen to the rear passenger just begs for touch control. The rear seats also feature dual-zone climate control with two central vents as well as vents on both b-pillars. Another party trick that trickles down from the 7 Series is the touchscreen key fob that allows you to pre-cool your car at a set time everyday, and remote park into tight spaces where you can’t open the drivers door or if you just want to impress friends or spook your watchman.

Drivers delight?
We loved the balance between driving pleasure and luxury that the 520d brought to the table and the 530d does build on that feeling quite a bit. The M Sport trim adds just a bit to the luxury quotient with better seats up front and twin infotainment screens at the rear. If you were happy sitting in the three passenger seats of the 520d (front and rear) you’d be a little happier in the 530d - though they are nowhere near as plush as rear seats in the Mercedes-Benz E350, for example.

But it’s behind the wheel of the 530d you will have absolutely no complaints. The effortless performance and torque of that engine had the driver inside me constantly switching to Sport mode whenever I grabbed the keys and left the strongest impression on my heart after we returned the car. At 63.8 lakh (ex-showroom pan India) the BMW 530d M Sport is 8 lakh dearer than the 520d, but it’s nearly, ever so nearly, two cars for the price of one.