While the two sedans are similar in profile, there are clear distinctions 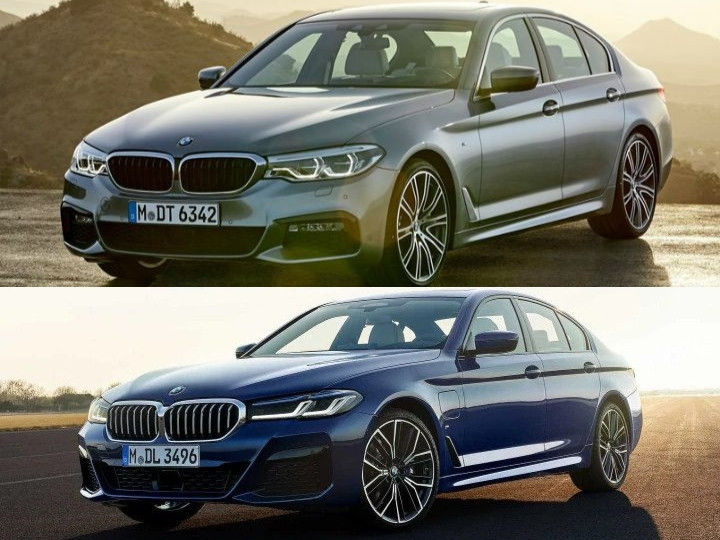 The current BMW 5 Series doesn’t feel aged despite being launched in India three years ago. But that hasn’t stopped the Bavarian brand from giving the sedan a mid-life cycle update referred to as LCI (Life Cycle Impulse) outside India. The facelifted 5 Series brings forth tweaked styling as well as new tech. Here’s more about what’s changed between the two sedans in detailed images:

Thankfully, BMW has not given the 5 Series abnormally large kidney grilles. Instead, it's a small increase in size from before, flanked by a slimmer set of LED headlamps. It also gets more aggressive front bumpers with neatly styled air dams.

The overall silhouette remains identical, aside from a new set of dual-tone alloy wheels in 18- to 20-inch formats. Heading towards the rear, it gets a redesigned set of tail lamps as well as subtle tweaks to the bumpers.

Heading inside, there are still plenty of similarities between the two sedans with a 12.3-inch instrument cluster and a 10.25-inch central infotainment system. The facelift adds two new cabin trim options with black inserts.

Other upgrades in the 5 Series LCI include the addition of a digital key that turns the Apple iPhone into a car key, an updated OS that adds Android Auto connectivity, and a new cloud-based navigation system. It also gets assists like lane change assist and parking assistant with reverse assist. The sedan is also capable of receiving OTA updates.

As a whole, BMW has given the 5 Series a modern flair with its recent mid-life update while still retaining the charm of the pre-facelift model. Expect the facelifted BMW 5 Series to hit Indian roads in 2021.