Hyundai’s Grand i10 managed to trump the Ignis in our last comparo. Will the Swift, which shares so much with the Ignis, face the same fate? 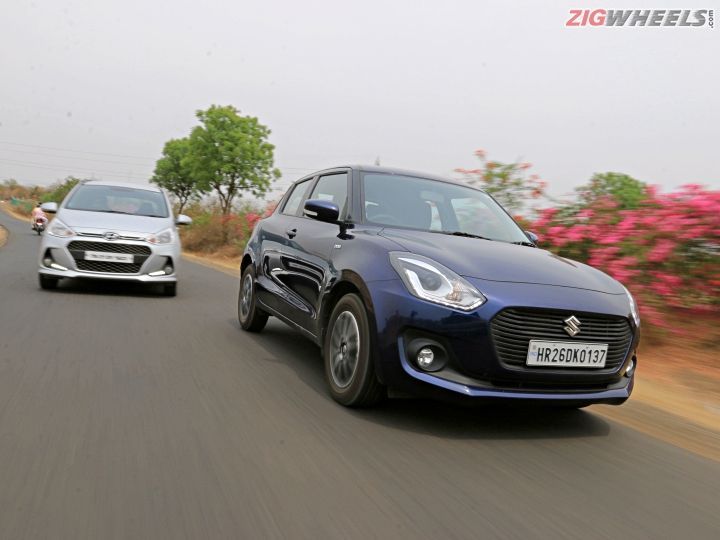 You’d be right in thinking so. After all, whether it’s the features list, the engines or the transmissions, the 2018 Maruti Suzuki Swift and the Maruti Ignis have more than just DNA shared. But, it would be naive to give the spoils to the Grand i10 so prematurely. After all, we’re talking about one of the highest selling cars in India. So, which one should you pick?

Eye Of The Beholder

Both contenders play it safe. The Swift looks a lot cleaner than before, but mixes it up with modernities like LED projector headlights, LED tail lights, bigger, 15-inch alloys (vs the Grand i10’s 14-inchers) and differentiators like the rear door handles that are nestled next to the C-pillar.

In comparison, the Grand i10 looks a touch more aggressive with the front bumper sporting black slashes for the fog lamp enclosures and DRLs. Also, while it does get a smaller set of wheels, the design is quite sporty. But the rest of the look is sober and even after the facelift, the car is starting to show its age.

Not only does the Swift look fresher, it’s also longer, wider, taller and has the larger wheelbase. There’s no ignoring the fact that the Grand i10 has a smaller footprint and the Swift has more road presence.

But, interior space has never been the Swift’s forte. So do these numbers translate into something meaningful?

Break Out The Measuring Tape

The answer is yes. The new Swift isn’t just bigger than the Grand i10, it’s also wider and has a larger wheelbase than its own predecessor. So now, you can seat a family of four comfortably and with 45mm shoulder room in surplus over the Hyundai Grand i10. It’s also better than the Grand i10 for seating three at the rear, though, we’d still call this a 4-seater that can seat five. The front and rear seats are also more accommodating of bulky frames. But while the all-black cabin looks sporty, it does eat away at the sense of space, especially when combined with the tall window line.

This is where the Grand i10 one-ups the Swift. The beige-black dual tone palette is a bit staid, but it does make the cabin feel airier. The glass area feels larger and rear seat occupants will find the seats cushier as well. As a 5-seater, the Swift is more capable, but for four, the Grand i10 is just better. This isn’t just because of the seats or sense of space, there’s actually more knee room on offer. You even get niceties like AC vents and a 12V charging socket at the rear. What stands out the most though, is the quality. Unlike the Ignis, the Swift doesn’t really employ the finest range of tacky plastics, but there’s a finesse to Hyundai’s choice of cabin trim that the Swift, a car that’s nearly half a decade younger, still can’t match.

Both cars have a good practicality quotient with enough storage spots for your cell phone, knick-knacks and bottles. The Grand i10 has more accommodating rear door bins while the Swift has the bigger boot and wider opening to it.

Whip out the Top Trumps cards and prepare for a walk down memory lane. Sadly, it’s a short walk. These cars are neck-and-neck when it comes to the features list. Smart key with push-button start, auto AC, height adjustable driver’s seat, leather steering, steering-mounted audio and phone controls, and a 7.0-inch touchscreen infotainment system (with Android Auto, Apple CarPlay and MirrorLink) are features common to both.

The Swift gets a few points for offering auto headlamps, SD card navigation and LED projector headlights, but the Grand i10 gets rear AC vents. Also, the Grand i10’s infotainment setup is superior as it has the better user interface and doesn’t glare under direct sunlight unlike the Swift’s SmartPlay.

But, this round goes to the Swift for one big reason - safety. Yes, both of them do get dual front airbags and ABS, but only the Swift gets them as standard. Also, only the Swift gets ISOFIX child seat mounts (standard again). A miss by Hyundai and though the MY18 model sees ABS offered on the Sportz variant as well, the Magna and Era still miss out on it.

The new Swift has truly found a sweet spot between the driver-centric first gen and family-focused second gen. Take it to a set of twisties, yes even the diesel, and this Kart certainly has some Go to it. The Swift enjoys darting through corner after corner and is just stiff enough to stay flat through them. While the steering isn’t the quickest or the most communicative, it’s significantly better than the Hyundai’s when you’re looking to have some fun. The latter’s steering is quicker but is simply devoid of feedback, so you can’t carry high speeds into a hairpin with confidence the way you can in the Swift.
Two points to note though; if you’re buying the Swift as a driver’s car, upgrade the tyres. Secondly, the diesel, in particular, is a bit nose heavy. So if you brake hard into a corner, expect the tail to sway out a bit.

Out on the highway, the Swift has the more mature ride at high speeds. Both feel equally composed in the front seats, but the Grand i10’s rear bench gets a touch bouncy. It doesn’t settle as quickly after say, crossing an expansion joint north of 100kmph. The bigger challenge for the Korean contender here, though, is its engine. Both cars make the exact same amount of power and torque, with the primary difference being the Grand i10’s one cylinder deficit.

The engine works well on the highway if you employ a relaxed driving style and shift up early. But it’s not an engine you can push. Anything beyond 3,500rpm is all noise and no progress, so it’s best to work your way up the ratios quickly. Contrarily, the Swift’s engine is happy to play kho-kho close to the redline. It doesn’t protest as much when revved hard and is more relaxed at cruising speeds. This shows in both, our performance and efficiency tests. The Swift is nearly a second quicker to 100kmph and over 5kmpl more efficient at highway speeds (avg speed of ~68-70kmph).

But then, this is no unfamiliar engine and it has an all too familiar problem - turbo lag. Below 2,000rpm, the 1.3-litre DDiS is sluggish and there is a very noticeable surge when the turbo kicks in. Try even crawling at 20kmph in 3rd gear and the motor is on the verge of stalling. Ask the same of the Grand i10, and it’ll do so without breaking a sweat. That’s where the Grand i10 excels - low speed driveability. Even if you go a gear too high, the motor somehow finds a way to make it work and light throttle inputs are all you’d need for the day’s commute. The Grand i10 simply is a better city slicker. The comfort-set suspension also deals with low speed bumps and undulations better than the Swift does and keeps the occupants better insulated from the surface underneath at urban speeds.

Much like it was with the Ignis comparo, the Grand i10 holds its crown as the better city car, while the Swift takes the cake when highway usage is also factored in. It also has the advantage of offering an automatic transmission with both, the petrol and diesel engines, and a well-tuned one at that.

Get To The Point

Ready? And the winner is… neither one. The fact is, there’s no way to declare anyone as the outright winner. Each car caters to certain needs better than the other. It’s a simple case of different strokes for different folks.

With its more supple low-speed ride, superior city driveability and all-round premium quality, the Hyundai Grand i10 comes across as the sweeter city slicker and family car. The top variants considered, it’s also the better value proposition, since it’s over Rs 80,000 cheaper. In fact, the Grand i10 Asta (o) is priced at par with the penultimate Swift variant - Zdi.

The Swift has the X-factor. It offers a fun-to-drive experience and is the better pick if you have a lot of highway usage as well. It’ll also do a better job as a 5-seater and gets an edge because key safety features are offered across the range as standard, unlike in the Grand i10. Ultimately, the right car comes down to what kind of a buyer you are.