The Kodiaq is already an SUV that delivers a great balance of features, practicality and luxury. So what does the Scout bring to the table that the Style & L&K didn't already? 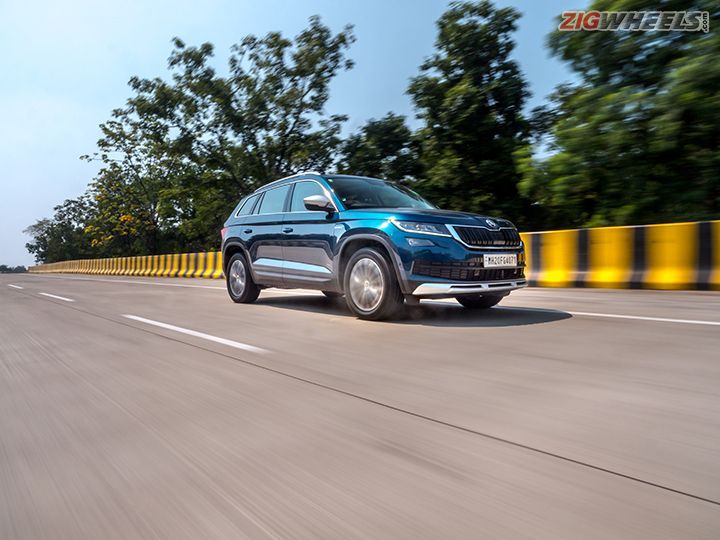 The Skoda Kodiaq Scout is at its essence, part three of the Kodiaq’s split personality. Its pricing in the lineup makes it the middle child, and the updates here make it seem like the Kodiaq for those who are just a touch wild.

However, the changes here aren't drastic, so we've taken the Scout for a quick spin to see if it makes us look at the Kodiaq any differently.

How Do You Identify A Scout?

While you still have to look closely to tell the base Style apart from the range topping L&K, the Scout is very easy to distinguish.

It also gets slightly different alloy wheels. While they're still 18-inch units with the same design as before, these Anthracite Trinity wheels get a two-tone silver finish.

That aside, this is the first Skoda SUV to get the brand's new insignia at the rear i.e. the winged arrow logo is dropped in favour of S-K-O-D-A lettering on the tailgate.

Also, it gets one more colour option than the style - Lava Blue, but misses out on the L&K's Magnetic Brown.

Any Difference On The Inside?

Here's where the differentiators of the Scout get amplified. For one, it employs an all-black cabin instead of the beige you get in the other two variants. It also gets a strong dose of contrast wood-look finishes on the dashboard and door pads that lend it the charm of a 90’s Mercedes-Benz. You will also find some Scout insignia on the dashboard's wood-look panel, a Scout-specific infotainment boot up screen, as well as the variant name etched into the seats.

Speaking of which, the seats themselves are draped in Alcantara a la Octavia RS, and feel far richer to be seated in. Even the door pads have portions finished in the velvety upholstery and this truly uplifts the in-cabin experience. No doubt, this is one of the Scout's primary talking points.

What About Unique Features?

The other big talking point for the Scout is the off-road mode. Don't let the name confuse you, this is just hill-descent control. While driving downhill on low-grip surfaces (at speeds of upto 35kmph), the off-road mode automatically controls your descent speed, reducing the need for any braking input from the driver. With this mode, you also get some displays in the infotainment system, like an altimeter, compass and tyre position display, along with engine oil and coolant temperature displays.

Also, oddly, the tyre pressure monitor is now a feature exclusive to the Scout. This was a standard feature earlier, as was the pop-out door protector that's now been deleted from the Kodiaq entirely.

Is It Now A better Off-Roader?

Honestly, no. The Scout sees no increase in ground clearance vs the other variants but still offers a good 188mm of it (unladen).

Skoda also bragged about the rough road package (with underbody protection) for the Scout at its launch, but this is a standard feature for all India spec Kodiaqs, for reasons we don't have to spell out.

And as explained before, the off-road mode is just hill-descent control. The Kodiaq still isn't as hardcore an off-roader as the Toyota Fortuner or Ford Endeavour. It'll deal with muck, slush, gravel and snow quite well, but these capabilities are common to all Kodiaq variants.

Otherwise, the drive story remains identical and it gets the same bouquets and brickbats from us. It's an excellent highway tourer and happily cruises at speeds north of 120kmph. It's also a smoother city drive than any of its ladder-frame rivals and the 7-speed DSG gearbox offers quick and near-seamless gear changes.

However, the 150PS/340Nm tune of the engine is just enough. It's nothing exceptional and will only satisfy your needs. But when you want that extra bit of power that corrupts you ever so slightly, the kind of wow performance you'd expect after paying Rs 40 lakh, you find that the Kodiaq misses out on that.

The Scout retains the core values of the Kodiaq. It offers an expansive list of features, premium interior quality and understated styling.

But given how most Kodiaq buyers are opting for the L&K, it should’ve had the L&K exclusive 360-degree camera and virtual cockpit. Ideally, Skoda shouldn't have placed the Scout below the L&K but offered it as a more rugged-looking alternative for buyers who'd want something that looks less corporate. This sentiment is amplified when you experience the Alcantara-draped interior.

However, that aside, at Rs 34 lakh, the Scout delivers good value over the Style (Rs 33 lakh) for the features added. It also makes one wonder, why does the L&K cost almost Rs 3 lakh more?