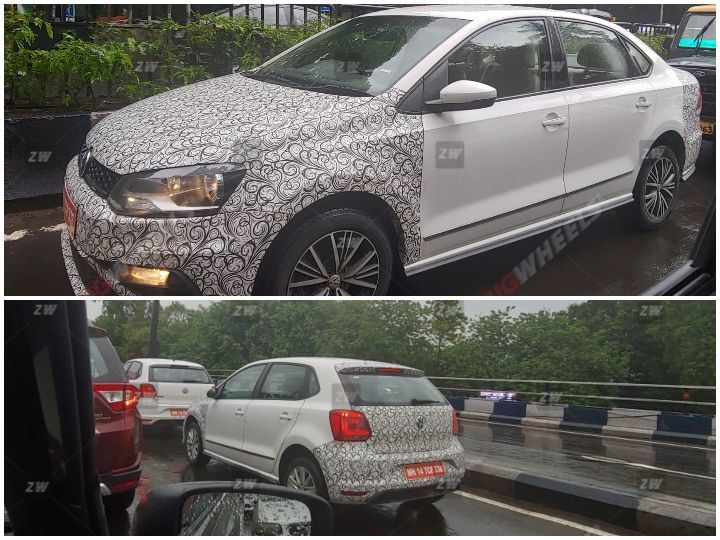 The Volkswagen Polo and Vento, which has been known to get frequent special editions -- Black and White edition, Cup edition; is set to get a facelift by the end of this year. The facelifted duo was spied testing in Pune and here’s what you can expect from it.

The spy images reveal that the Vento sedan gets a redesigned fascia with a redesigned front bumper taken from the GTi hot hatch. The twin chrome slat grille has been replaced by a honeycomb mesh pattern and the bonnet has a cutout for the VW logo. The spied variant was riding on dual-tone alloys seen in the recently revealed Cup Edition car. A closer look also reveals a sleek chrome strip running along the lower section of the doors. While we couldn’t get a spy shot of the rear end, previous images suggest that it remains largely similar except for slightly restyled tail lamps and a black trim in the lower bumper.

The Polo, on the other hand, gets a similar looking front-end as the Vento facelift. Its profile also remains largely the same and gets a chrome strip just like its sedan sibling. The rear end though gets restyled tail lamps that are likely to be part LED units. It also gets a black trim in its bumper for a sportier effect. It must be mentioned that the Polo GT will also get a facelift as it has been been spied before.

While the interiors of both cars are expected to be almost the same, expect a new colour scheme and trims to keep things fresh.

Under the hood, the Polo and Vento facelift is likely to carry forward the 1.0-litre and 1.6-litre MPi engine that is likely to be upgraded to the upcoming BS6 emission norms. Here are the detailed specifications of these engines in the current BS4 guise:

But, the 1.2-litre turbocharged petrol found in the GT TSI and Vento TSI is most likely to be replaced by the BS6-compliant 1.0-litre TSI motor. Available in two states of tune -- 95PS and 115PS --, we expect the more powerful variant to power the hot hatch and the sedan. Currently, the 1.2-litre TSI churns out 105PS of power and comes mated to a 7-speed DSG transmission.

While it is yet to be known whether the 1.5-litre TDI will be present in the facelift or not, Volkswagen will axe it post the upcoming BS6 emission norms as it won’t be upgraded. It would be very expensive to upgrade the diesel engines, which will also drive up the prices of the car. The 1.5-litre TDI comes in two states of tune -- 90PS and 110PS. While both cars use a 5-speed MT, the Vento also comes with a 7-speed DSG gearbox, which is available on the Polo in its GT Guise.

As mentioned above, the Polo and Vento facelift are expected to hit our roads by the end of this year. When launched, they are expected to cost more than their current iterations which are priced from Rs 5.71 lakh to Rs 9.72 lakh (Polo ex-showroom, Delhi) and Rs 8.65 lakh to Rs 14.34 lakh (Vento ex-showroom, Delhi). It must also be mentioned that both the models will get their latest iterations by 2021.