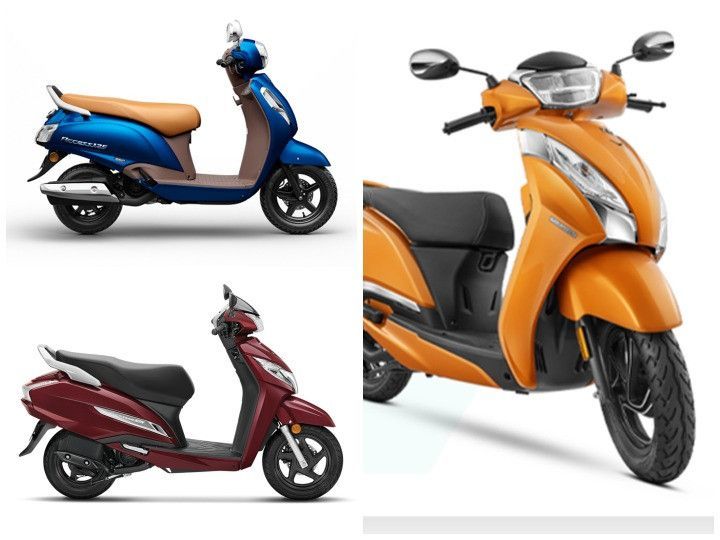 TVS has finally entered the 125cc scooter segment with the Jupiter 125. It’s built from the ground up, with several segment-first features and creature comforts. At its price point, it competes with the family-oriented Suzuki Access 125 and Honda Activa 125, both incredibly good in their own rights.

So how does TVS’ newest entrant compare to its rivals on paper?

Well, the TVS Jupiter 125 is the least powerful scooter in its segment but it does offer a healthy dose of torque. So, we can expect it to bolt off the line fairly quickly. However, the Access 125’s better power-to-weight ratio should give it the edge over the other two. So, the Access, Jupiter, and Activa -- in that order.

All three scooters are pretty similarly equipped in terms of hardware. The Jupiter 125 and Activa, however, feature a three-step preload-adjustable monoshock, which is quite useful while carrying extra weight. Bump up the preload, and you’re good to go.

What also works in the Jupiter's favour is its braking setup. The larger front disc should help it drop the anchor sooner compared to its rivals.

The Jupiter 125 does have the longest wheelbase, which should make it more stable in the straights. However, the scooter’s 5-litre fuel tank is positioned in the floorboard, lowering its centre of gravity. This, in theory, should make the Jupiter 125 a good handler as well. But that can only be put to the test once we get to ride it.

At 109kg kerb, the TVS is positioned between the Access and Activa. So it should be fairly easy to wade through traffic or simply move it around in the parking lot. Also, a low seat height of 765mm means it should be more accessible for shorter riders.

Like we mentioned earlier, the Jupiter 125 packs a ton of segment-first features and creature comforts. You get everything expected from a premium 125cc family scooter and then some. The most significant of them is a massive 33-litre underseat storage capable of accommodating two helmets (full-face + half-face). You even have 380mm of leg space (big enough to store a gas cylinder, but we strongly suggest you don’t) and the longest seat in its segment, measuring 790mm.

The Access, too, packs a number of features, but most of them are only available in the top-spec Ride Connect variant. The same goes for the Activa 125.

TVS has been spot on, really. At its asking price, the Jupiter 125 stands shoulder to shoulder with its rivals while offering a lot more. So, we’d say it’s value for money, and that’s precisely the Jupiter’s USP. Not to mention its feature list, which is bound to impress anyone looking for a practical, everyday scooter.

The Access, on the other hand, is known for its butter-smooth engine, peppy performance, and build quality. It’s one of the sweetest scooters we’ve ridden so far.

The Activa isn’t far behind either, riding on its reliable motor and silent start technology that’s second to none. So, at the end of the day, it all boils down to what you want from the scooter.