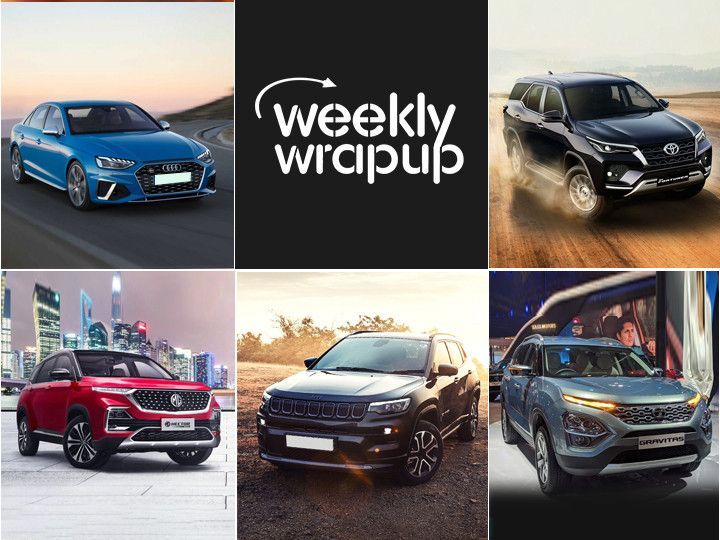 The first week of 2021 witnessed a slew of new launches, announcements, and unveilings in the country. In case you’ve been busy, we’ve got you all the action from the past week in a single report.

The A4, one of Audi’s bread and butter models, is back to showrooms in its latest iteration. It gets a sharper exterior design, a new infotainment system, and a more powerful 2.0-litre TSI petrol engine. For prices, click here.

The facelifted Fortuner was launched in India on January 6. It comes with a more powerful 2.8-litre diesel engine, new features, and a new top-spec Legender variant. While the upgrades give it a breath of fresh air, it comes at a steep price. Details here.

Morris Garages has launched the facelifted Hector with a cosmetic update and additional features. The carmaker has also launched the more practical 7-seater Hector Plus and hiked the prices of the six-seater model. Head here for the prices.

Three years after its introduction, the Jeep Compass has received its first update in the form of a facelift. While the exterior updates are minimal, the interior gets a comprehensive overhaul with plenty of new tech. Take a closer look here.

Tata Gravitas To Be Called…

The Safari had always been a childhood favourite of this author. It was an emotional moment for many when Tata decided to pull the plug on its icon. However, the Safari is set to come back in its latest avatar as a modern 7-seater SUV. We aren’t kidding!

Skoda has revealed the official name of the production-spec Vision IN SUV. Is it called the Kliq or the Kosmiq? We’ll give you a clue: the name starts with K and ends with Q. Click here for the answer.

It’s no secret the Renault Kiger will utilise the same underpinnings as the Magnite. However, the SUV will follow Renault’s design language and come with a unique exterior and interior design. Click here to know when the production model will be unveiled.