The one without any airbags scored zero! 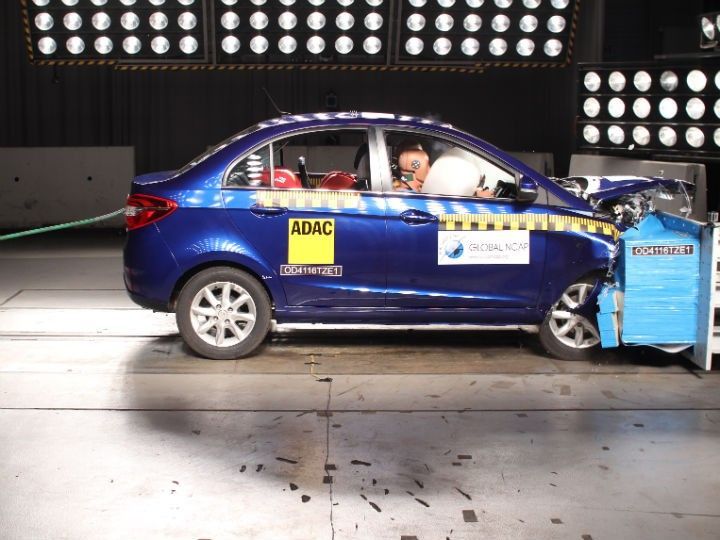 Global New Car Assessment Program (Global NCAP) is a UK based company that performs crash test for new cars. Apart from testing vehicles from various markets around the world, it has also put several cars from India to the test. The latest crash test was done for two models of the Tata Zest - the one without airbags and the one with two airbags.

The standard non-airbag variant scored zero for adult occupant protection and one star for child occupant protection. Since Global NCAP offers all car manufacturers to test another version of the same car, the same opportunity was given to Tata Motors. The home-grown automaker introduced a structural improvement to the entire Zest range while Global NCAP tested the new version with optional dual airbags.

The dual airbags version with two pretensioners performed considerably well. Together with the seat belt reminder for the driver, the sub-4 metre sedan from Tata scored an impressive four-star rating for adult occupants. Tata also selected other child restraint systems for the airbag version, which improved the child occupant safety to two stars.

On this achievement, David Ward, secretary general of Global NCAP said, “Tata has shown how they can dramatically improve the safety of the Zest. It is encouraging to see a major Indian brand improving the safety of their models. We strongly encourage Indian consumers to opt for the much safer four star rated option. We also urge Tata to consider making the two airbag version of the Zest their basic model.”

Rohit Baluja, president of the Institute of Road Traffic Education added, “The concept of Star rating should not be limited to compliance, but should be taken as the challenge of producing a safe vehicle which would have the ability of supporting the avoidance of a crash and, on the other side, limiting the injury to vehicle occupants and that of people outside the vehicle in case of a crash. This challenge demonstrated by Tata Motors would set yet another example in Indian automobile industry, and would ultimately lead to a consumer awakening towards choosing safer vehicles.”

Apart from the Tata Zest, the Global NCAP has tested 13 other cars which are on sale in India. The only other cars that have managed to receive a four-star score were the Toyota Etios Liva with two airbags and Volkswagen Polo with dual airbags as well.